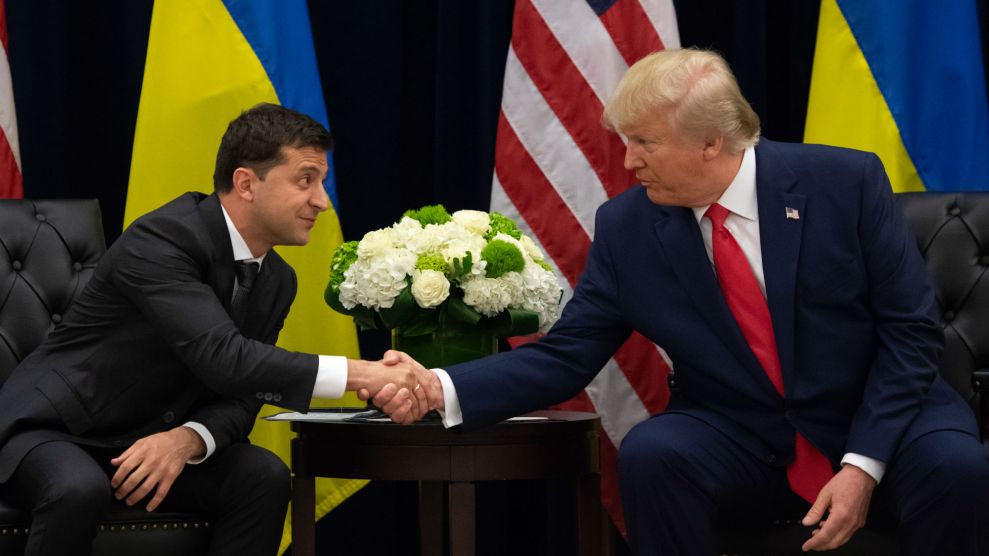 Over the last few days, President Donald Trump’s defenders have tried to frame the growing Ukraine scandal as a simple question of whether Trump pressured Ukrainian President Volodymyr Zelensky with an explicit quid pro quo: Dig up dirt on Joe Biden in exchange for hundreds of millions of dollars in desperately needed military aid. The fact that Trump suspended that aid shortly before personally asking Zelensky during a July 25 phone call to investigate Biden, the White House insists, isn’t evidence of wrongdoing.

Trump’s defense of his statements on the call is dubious at best. But a whistleblower complaint filed with the inspector general of the intelligence committee and released Thursday by the House Intelligence Committee makes clear that the scandal extends beyond that single phone conversation. What the whistleblower alleges is a far more complicated and extensive exchange of favors that Trump and his lawyer, Rudy Giuliani, sought to engage in with Ukrainian officials.

Between May and July, “multiple U.S. officials told me that the Ukrainian leadership was led to believe that a meeting or phone call between the President and President [Zelensky] would depend on whether [Zelensky] showed willingness to ‘play ball’ on the issues that had been publicly aired by [Yuriy Lutsenko, Ukraine’s prosecutor general until late last month] and Mr. Giuliani,” the unidentified whistleblower says in the complaint.

Those issues already publicly aired by Giuliani and Lutsenko included questions about the August 2016 release in Ukraine of the information that Paul Manafort, then Trump’s campaign chairman, had received millions of dollars in secret payments from the pro-Russia political party of former Ukrainian President Viktor Yanukovych. Manafort, who had been a consultant for Yanukovych, was booted from the Trump campaign due to those reports. Manafort claimed all the money he got from Ukraine was above board, but he was later convicted of crimes related to these payments.

Giuliani has asserted that the release of the Manafort information was not merely the exposure of corruption but actually represented nefarious “collusion between Ukrainian officials and Hillary Clinton.” Giuliani and Lutsenko have also attacked former US ambassador to Ukraine Marie Yovanovitch, who criticized Lutsenko’s reluctance to combat corruption. Giuliani and Lutsenko alleged, among other unsupported claims, that Yovanovitch had worked to undermine Trump’s agenda in Ukraine. The State Department has denied these allegations and no evidence substantiating them has emerged.

As the whistleblower notes, Giuliani and Trump wanted Ukrainian assistance not just in smearing Biden but also in bolstering Trump’s claims that the Mueller investigation of the Trump campaign’s Russia contacts—which included the Manafort case—was launched on questionable pretenses. According to the whistleblower’s complaint, Trump’s emissaries indicated to Ukraine that in order to secure a personal meeting with Trump, Zelensky would need to provide such help. Trump’s delay of military aide to Ukraine may have gotten the attention of Zelensky’s government. Then, during the July 25 call, Trump asked Zelensky for a “favor”—that Ukraine work with Attorney General Bill Barr to investigate the origins of the Mueller probe. Trump said that “a lot” of the Russia scandal “started with Ukraine,” adding, “Whatever you can do, it’s very important that you do it if that’s possible.” What’s more, Trump made this request for a “favor” immediately after Zelensky mentioned that he hoped to buy Javelin anti-tank missiles from the United States, which sure sounds like a suggestion of a quid pro quo.

And there are plenty of indications such cooperation was under way. During his call with Trump, Zelensky seemed eager to give the US president what he wanted. “We are open for any future cooperation,” he said after Trump asked him to help Barr. Zelensky also said that one of his aides had already recently spoken with Giuliani and that “we will meet once he comes to Ukraine.”

Giuliani did not go to Ukraine. But according to the whistleblower, Giuliani did meet with one of Zelensky’s advisers on August 2 in Madrid. The complaint notes that US officials characterized this meeting, which was not publicly reported, as a “direct follow-up” to the “cases” Trump’s brought up in his call with Zelensky. Zelensky got his sit-down this week, when he and Trump met at the United Nations in New York.