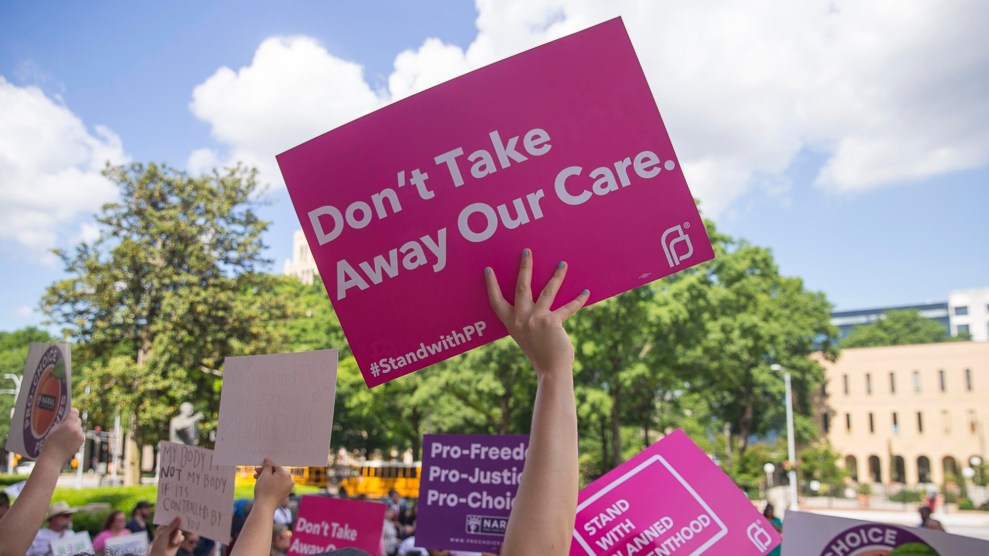 Protestors rally outside of the Georgia State Capitol following the signing of HB 481, in Atlanta, Tuesday, May 7, 2019. Alyssa Pointer/Atlanta Journal-Constitution via AP

On Tuesday, a US District Court in Atlanta blocked Georgia’s controversial six-week abortion ban from going into effect.

“This is a victory for people in Georgia and a reminder that these attacks on abortion access are illegal,” Talcott Camp, deputy director of the ACLU’s Reproductive Freedom Project said in a statement. “Abortion is still legal in all 50 states. We won’t stop fighting until we defeat all efforts to block access.”

The ban, signed into law by Georgia’s Republican governor Brian Kemp in May, would have blocked most abortions once a doctor was able to detect a fetal heartbeat, which occurs around six weeks of pregnancy and is often before someone is aware of a pregnancy. The ban was intended to go into effect in January, but in June, the Center for Reproductive Rights, along with lawyers for the ACLU and Planned Parenthood, sued to prevent this from happening.

Georgia was one seven states—Alabama, Kentucky, Louisiana, Mississippi, Missouri and Ohio—to enact similar abortion bans earlier this year, and all have been challenged in court. Following the confirmation of Supreme Court Justice Brett Kavanaugh, many state legislatures rushed to pass anti-abortion bills in the hopes of getting a case to the Supreme Court that could overturn Roe v. Wade. According to the Center for Reproductive Rights, state legislatures have passed more than 300 bills restricting abortion access this year, nearly half of which they say, “would severely restrict access to abortion.”

“The court recognized today that this law is blatantly unconstitutional and a clear attempt to overturn Roe v. Wade,” said Emily Nestler, Senior Staff Attorney at the Center for Reproductive Rights. “Instead of passing laws that restrict the rights of pregnant women, Georgia lawmakers should be implementing policies that help pregnant women. ”

District Court Judge Steve Jones, who presided over this case, found that the law violated the 1974 Supreme Court ruling in Roe v. Wade that guaranteed the right to an abortion for women by banning abortion before viability. “Under no circumstances whatsoever,” Jones wrote in his decision, “may a state prohibit or ban abortions at any point prior to viability.”

The Atlanta Journal and Constitution  reported that the governor’s office will be reviewing the Jones decision.

“Despite today’s outcome, we remain confident in our position,” Kemp spokeswoman Candice Broce told the AJC. “We will continue to fight for the unborn and work to ensure that all Georgians have the opportunity to live, grow and prosper.”

Anti-abortion groups also spoke out against the ruling.

“This is yet another demonstration of judicial activism against an overwhelming majority of Georgians who support protecting innocent life,” Joshua Edmonds, the executive director of the anti-abortion Georgia Life Alliance, told the AJC. “We will continue to fight to prevent Planned Parenthood and the ACLU from turning back the clock on human rights in Georgia.”