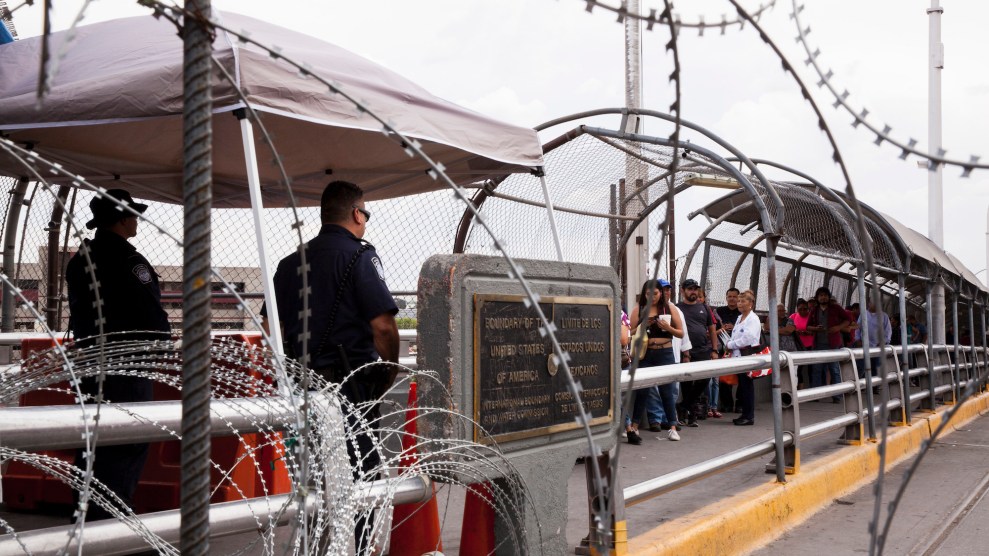 Razor wire is strung along the US and Mexico sides of a port of entry in El Paso, Texas, in August.Jinitzail Hernández/Getty

In the summer of 2017, the Trump administration made El Paso the test site for a family separation policy whose existence the administration denied. Now the administration is using El Paso to test another secretive policy that will allow it to rapidly deport asylum seekers with negligible due process. And on Tuesday, Acting Customs and Border Protection Commissioner Mark Morgan touted a sharp drop in border crossings at a press conference in, appropriately enough, El Paso.

The number of people taken into custody by Border Patrol agents dropped from 132,856 in May to 40,507 in September. That is mostly because far fewer Central American families are crossing the border now that they know they are unlikely to be quickly released. The number of parents and children traveling together stopped by Border Patrol agents plummeted from 84,486 to 15,824 during that period.

The decrease has happened because the administration has learned a lesson between the two El Paso experiments that have bookended its immigration crackdown. Since the fiasco of family separation, it’s moved toward policies like the new El Paso pilot program that are complex and hidden from public view. The new policy is legally technical and won’t require splitting up families, meaning it is unlikely to generate the same kind of public backlash as the family separation crisis. Its adoption is another sign that the Trump administration concluded from the family separation crisis that deterrence is more sustainable when it is obscured and hard to understand.

The total number of migrants apprehended at the border throughout the 2019 fiscal year, which ended in September, was higher than in any year since 2007. Instead of Mexican men looking for work—the prototypical migrants in recent decades—most of the people stopped at the border were Central American families who readily turned themselves in to Border Patrol agents to start the process of seeking asylum. Of the 851,508 people apprehended by Border Patrol agents this year, 473,682 were traveling with family members—more than four times the previous record set in 2018.

After a year of flailing and being blocked in court, the Trump administration’s border deterrence strategy began to coalesce this summer. The first obstacle migrants now face—secured after Trump threatened to place tariffs on Mexico—is increased Mexican enforcement that happens out of US view. For those who do reach the border, the Remain in Mexico policy now sends them back to dangerous Mexican border cities to await their US court dates. That program that has affected more than 50,000 asylum seekers and likely deterred many thousands more.

In September, the Supreme Court ruled that the Trump administration can effectively end asylum at the border while litigation is pending. That is what makes the new “Prompt Asylum Claim Review” policy in El Paso possible. The asylum ban means that people at the border now have to seek protection under forms of relief like the Convention Against Torture that are much harder to obtain than asylum. PACR rushes migrants through hard-to-pass screening interviews that are used to determine whether someone is even eligible to apply for those protections.

CBP Deputy Commissioner Robert Perez said at the El Paso press conference on Tuesday that only a few dozen people have been put through PACR so far. As with family separations, Perez said CBP would look to expand the program along the border after it was tested in El Paso.

CBP did not tell El Paso immigration attorneys about the new program. Taylor Levy, an El Paso immigration lawyer, found out about it earlier this month when an out-of-town attorney contacted her to ask for help representing two sisters in Border Patrol custody. Raquel, one of the sisters, had a six-month-old son with her. Silvia, the other sister, had a one-year-old daughter. They’d been told by border officials that they needed to find an attorney within 48 hours to avoid being deported, Levy said on a call with reporters on Monday.

Against the odds, Raquel found an attorney while she and her son were being held in the frigid and often traumatizing holding facilities known as hieleras, or iceboxes. She was allowed two phone calls during her time in detention. Linda Rivas, the executive director of El Paso’s Las Americas Immigrant Advocacy Center, said lawyers have no physical access  to clients in the PACR program. “We have been told that they cannot and will not physically accommodate attorneys,” she said.

Raquel did not meet the higher standard forced by the asylum ban and was deported to El Salvador, where Levy said she immediately sought medical attention for her son. Raquel said in a statement that she felt tricked and humiliated by CBP. “Psychologically I am not well because of all the racism, abuse of power, and humiliation that I received,” she said.

Silvia, her sister, was separated from her husband and had been detained for three weeks when she spoke to reporters on Monday. On Tuesday, I texted Levy to see if there’d been an update. Silvia had also been deported, Levy replied. The fact that lawyers even knew she entered and left the United States will be the exception under the new El Paso program. The Trump administration prefers it that way.