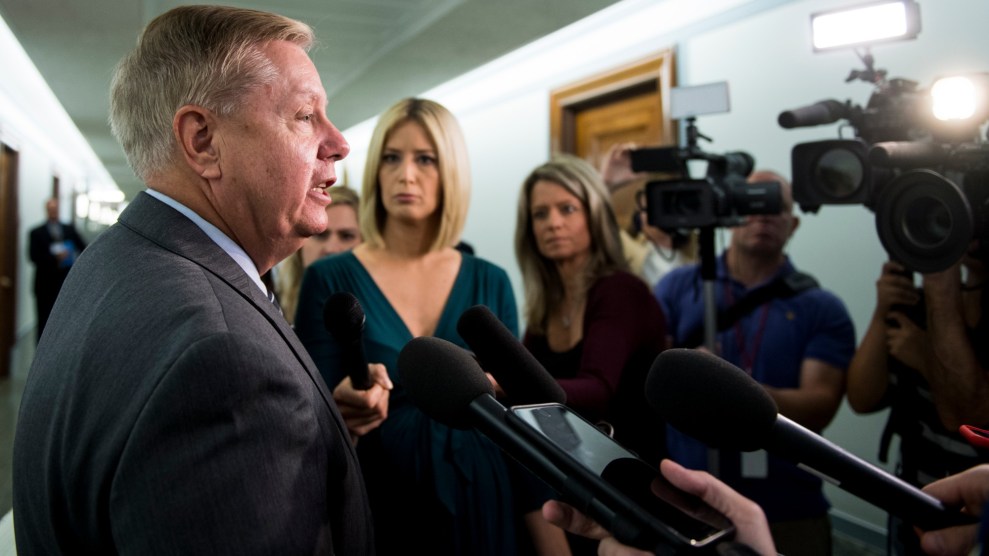 When President Donald Trump announced his decision to permit a Turkish invasion of northeastern Syria last week, outraged lawmakers were on recess and left with little recourse to register their concerns about the fate of the Kurds outside of Twitter and the Sunday news shows. Now they are assembling back in Washington for a week where Syria is expected to be top of mind through the corridors of the Capitol—above, perhaps, even impeachment. At center stage is a House Foreign Affairs Committee hearing Thursday with two State Department officials and a rash of unhappy members from both parties eager for answers. In a break from the normally staid titles of congressional hearings, this one is titled “The Betrayal of our Syrian Kurdish Partners: How Will American Foreign Policy and Leadership Recover?”, a sign that it could be far more explosive than a normal House oversight meeting, with representatives from both parties likely to ask tough questions of the Trump officials.

The session will focus on Trump’s decision to abandon the Kurds, who have become targets of the Turkish military after fighting Islamic State terrorists alongside the United States for the past five years. Later that morning, Defense Secretary Mark Esper and Chairman of the Joint Chiefs of Staff Gen. Mark Milley are scheduled to privately brief Senate Armed Services Committee members on “the situation in Syria and the wider region.”

In the Senate—an institution that hasn’t seen much cooperation between Republicans and Democrats in recent times—Lindsey Graham (R-S.C.) and Chris Van Hollen (D-Md.) plan to introduce sanctions against Turkey week with bipartisan support.

Graham and other lawmakers have railed against Trump’s rash decision to remove US special forces from the region, which essentially provided Turkey a green light to enter northeastern Syria and bomb Kurdish territory. At least nine civilians, including a Kurdish political leader, have already been killed in the strikes. Congressional Republicans fear that Trump’s withdrawal will create a pathway for ISIS to reemerge in Syria, where the Kurds have kept watch over thousands of terrorist detainees since the group was forced out of its last shard of territory in March. And, right on cue, hundreds of prisoners escaped at the onset of Turkey’s bloody campaign against the Kurds.

“Mr. President: change course while you still can,” Graham tweeted on Friday. Two days later, Trump did the opposite and doubled down on the strategy of letting the Kurds and Turkey fight it out without American interference. Esper announced that Trump will remove most of the 1,000 US troops left in northern Syria.

On Thursday, James Jeffrey, lead US diplomat for Syria policy and envoy to the counter-ISIS campaign, can expect to face heated inquiries from lawmakers along those lines when he takes center stage at the House Foreign Relations Committee hearing alongside Joey Hood, principal deputy assistant secretary for near eastern affairs.

Committee member Rep. David Cicilline (D-R.I.) tells Mother Jones that he’s “most interested” in asking about what Trump told American allies about his conversation with Turkish President Recep Tayyip Erdoğan before apparently green-lighting the invasion. “I’d also like to know how they plan to keep the troops that are currently there safe,” he said. Rep. Joaquin Castro (D-Texas), another committee member, wants to know what the State Department and Pentagon recommended to Trump before his call with Erdoğan, and if he was informed of the potential casualties that would result from a troop withdrawal. “I want to know if the Department of Defense or the State Department gave him an assessment of how many Kurdish allies would die,” Castro says. “Did he ask for that?”

Committee chair Eliot Engel (D-N.Y.) and top Republican Michael McCaul (R-Texas) have already made their displeasure with Trump’s strategy clear by introducing legislation to sanction Turkish officials and banks until Erdoğan ends the invasion of Syria. To override a potential veto from Trump, their bill must receive the support of two-thirds of members in the Democratic-majority House and Republican-majority Senate. Previous bipartisan ventures of this sort—such as legislation to block arms sales to Saudi Arabia—failed to do.

The Senate sanctions package targets a similar range of Turkish officials and institutions and received a major boost Monday when Trump said he “will soon be” issuing an executive order to sanction Turkish officials himself. On Twitter, Trump has oscillated between defending Turkey, belittling the Kurds, and threatening to “obliterate” Turkey’s economy if Turkish forces do anything “off limits” in Syria, but he appeared to indicate support for sanctions during a conversation with Graham on Sunday.

There won’t be a shortage of votes to condemn Turkey. Outside of few supporters like Sen. Rand Paul (R-Ky.), a frequent critic of American military interventions abroad, Trump is facing near-unanimous backlash from Republicans and Democrats alike.

Majority Leader Mitch McConnell (R-Ky.) even condemned Trump’s decision, saying in a statement that “it would increase the risk that ISIS and other terrorist groups regroup.” McConnell’s support will be key to bringing a sanctions bill to the floor of the Senate and ensuring it reaches a veto-proof majority.

Before speaking with Graham on Sunday, Trump provided a hint of his intention to punish Turkey, saying that he would deal with Graham and “many members of Congress, including Democrats” over whether to issue sanctions. “There is great consensus on this,” Trump said, adding that “Turkey has asked that it not be done.”