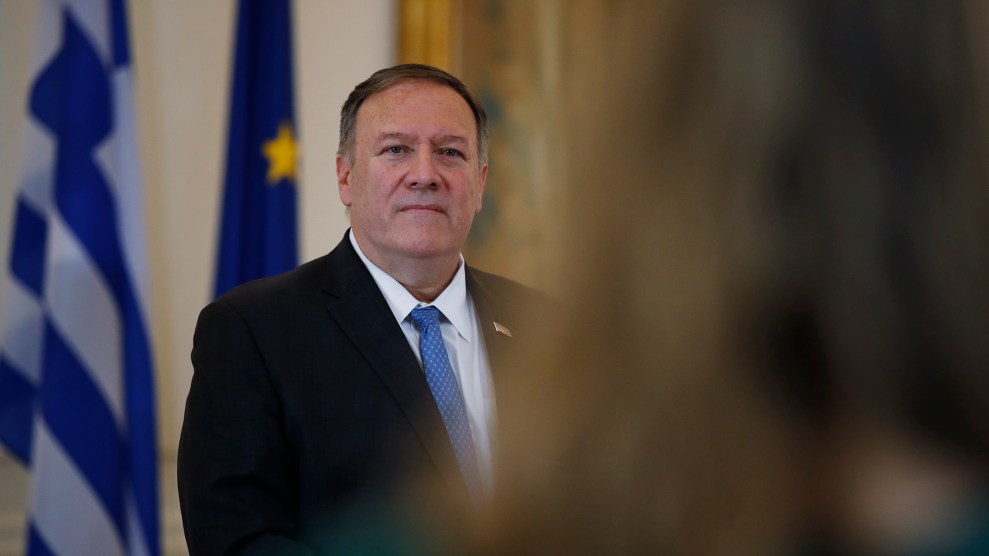 U.S. Secretary of State Mike Pompeo listens to a reporter's question, during a joint news conference with Greek Foreign Minister Nikos Dendias, following their meeting in Athens, Saturday, Oct. 5, 2019. Pompeo is in Greece on the last leg of a four-nation European tour that has been overshadowed by the impeachment inquiry in Washington.Thanassis Stavrakis/AP

“There’s been a congressional increase that harassed and abused State Department employees by contacting them directly and seeking to have them provide documents…that belong to the State Department,” Pompeo said in response to a question at a press conference during his visit to Greece as part of NATO meetings, according to AFP. “That’s harassment. And I’m never going to let that happen to my team.”

The State Department did not respond Saturday morning to questions about the failure to turn over documents related to a whistleblower complaint that triggered the impeachment proceedings. USA Today notes that the White House has signaled that it will not release any documents until the full House authorizes an impeachment inquiry by vote; it’s not clear if Pompeo’s approach is part of the White House’s strategy.

Earlier this week Pompeo tweeted a letter he’d sent to Rep. Eliot Engel (D-N.Y.), chairman of the House Committee on Foreign Affairs, in which he said he was “concerned” that the committee’s request “can be understood only as an attempt to intimidate, bully, and treat improperly the distinguished professionals of the Department of State, including several career Foreign Service Officers, whom the Committee is now targeting.” The letter said that State Department officials would not appear before any House committee without executive branch lawyers, and that the timelines set by House Democrats, both for documents and interviews, was too compressed. “Let me be clear,” Pompeo wrote in a subsequent tweet. “I will not tolerate such tactics, and I will use all means at my disposal to prevent and expose any attempts to intimidate the dedicated professionals” of the State Department.

A few days after he sent that letter, former US envoy to Ukraine Kurt Volker testified behind closed doors for more than eight hours, providing the committee with what Democrats say is evidence of a “shadow shakedown” by Trump and his private lawyer, Rudy Giuliani, according to Rep. Eric Swalwell (D-Calif.), a member of the House Intelligence Committee. House Democrats subsequently released text messages that they say show State Department officials working to pressure the Ukrainian government into announcing an investigation into Biden in exchange for a meeting with Trump. House Republicans have alleged that the texts released by the Democrats are incomplete and “cherry picked” in order to bolster a partisan agenda.

Meanwhile, Pompeo’s department is in the midst of investigating the email practices of former Secretary of State Hillary Clinton and as many as 130 current and former State Department officials, according to the Washington Post. The officials under review—which range from low-level to senior officials who had reported directly to Clinton—have been told that their emails have been re-categorized as “classified” years after they were originally sent. State Department officials told the Post that the investigation has been ongoing since the end of the Obama administration, but the paper noted indications that the review is politically motivated and that some State Department investigators “made it clear that they were pursuing the matter reluctantly, and under external pressure.”