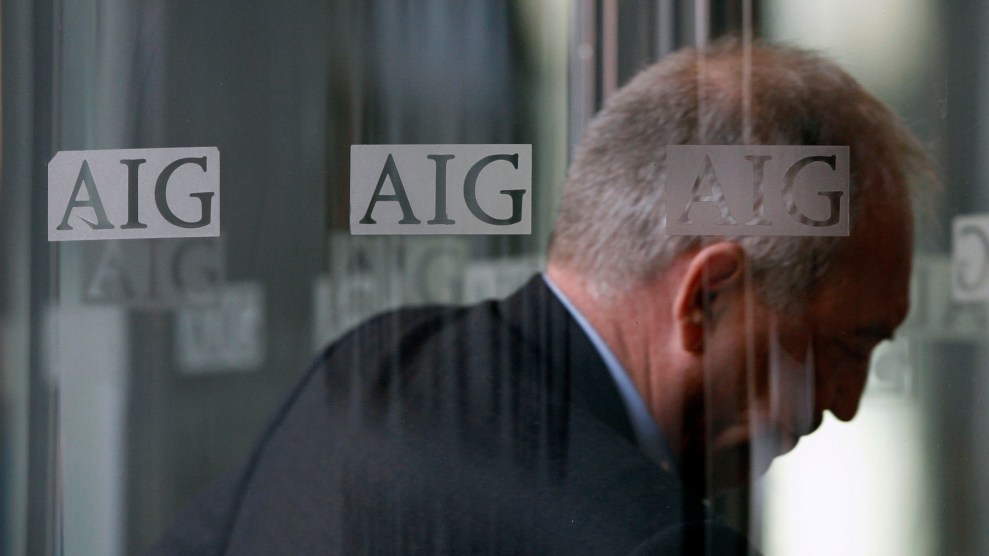 A man enters an AIG office building in 2009 in New York. American International Group Inc. used federal aid to pay out foreign and domestic banks, some of whom had received their own multibillion-dollar US government bailouts.Mark Lennihan/AP

Insurance giant AIG held a 100th birthday party in the House Ways and Means Committee’s hearing room on Capitol Hill Monday evening. According to Politico’s Zachary Warmbrodt, it was quite the soirée. Attendees were treated to an open bar, waiters offered trays of snacks, and an a cappella group performed at the end of the night.

Ways and Means chair Richard Neal (D-Mass.) presided over the festivities, which were well-attended by AIG’s corporate leadership. A bipartisan group of lawmakers from Ways and Means and the House Financial Services Committee―the bodies charged with overseeing the banking industry and taxation―attended, as well.

“It’s a slap in the face to the people affected by the financial crisis.”

But to many outside of Congress, this wasn’t an anniversary worth celebrating. AIG is particularly infamous for its role in helping trigger the 2008 financial crisis. The federal government ultimately floated AIG $180 billion dollars to rescue it from an impending collapse that could have been even more catastrophic to the wider economy. According to the final report of the Financial Crisis Inquiry Commission, the risky derivatives trades that led to AIG’s failure were only possible because of “sweeping deregulation” of those complex financial instruments. The company has since paid back the bailout funding, and in 2017 it convinced regulators to undo a post-recession designation that had subjected it to stricter government oversight. According to Politico, no one mentioned the bailout during the evening.

For progressives waging primary challenges against entrenched House Democrats, Monday’s event was a perfect example of what they see as the inappropriate coziness between centrist incumbents and the corporate interests they are supposed to keep in check.

“A lack of [government] involvement in allowing corporate giants to do what they please, set the rules for themselves, is what led to the [2008] collapse,” Alex Morse, who’s running against Neal, tells me. “A decade later, nothing has changed. There’s an open door policy between members of Congress and executives working at these firms, and it’s a slap in the face to the people affected by the financial crisis.” Neal, it should be noted, recently accepted a $2,500 campaign contribution from AIG’s political action committee.

Rachel Ventura—who is running against Rep. Bill Foster, a Financial Services member who attended the AIG event—described the gathering as “disturbing.” In a statement, she said that Foster’s presence was “not surprising” and called for an ethics investigation into how the party came to be.

For the last several months, progressive challengers have waged their primary battles on multiple fronts. Support for prized liberal initiatives, such as the Green New Deal and Medicare for All, and promises to curtail corporate influence have been the bedrock of their campaigns. But so was a sharp rebuke of centrist incumbents who did not share progressive activists’ urgency in impeaching President Donald Trump. Morse had hammered Neal over his lack of support for an impeachment inquiry back in July. “I can’t purport to know the congressman’s strategy, but people are angry and scared,” he told me then. “Our democracy is dying right before us, and we need members of Congress that are there to uphold the Constitution.”

But the emergence of a whistleblower complaint alleging Trump pressured Ukraine to investigate his political enemies complicated that position. As the details of Trump’s exchange with Ukrainian President Volodymyr Zelensky emerged, nearly all of those once-reluctant moderates, including Neal, lined up behind House Speaker Nancy Pelosi’s impeachment investigation. As a result, as HuffPost’s Daniel Maran’s noted, primary challengers lost that point of contrast.

Morse doesn’t think Democrats’ unity on impeachment actually helped matters for Neal. “I wasn’t running because of impeachment,” Morse tells me, reiterating his support for the progressive platform.

But the AIG party give progressives an easily understandable event they can use to illustrate their argument against the Democratic establishment. Morse tells me he’s plans to highlight it on the campaign trail. “This is a very clear example of what’s wrong with Washington,” he says. “Congressman Neal knows how Washington works, and it works when you open up your committee rooms to corporate interests and set the rules against working people and families.”