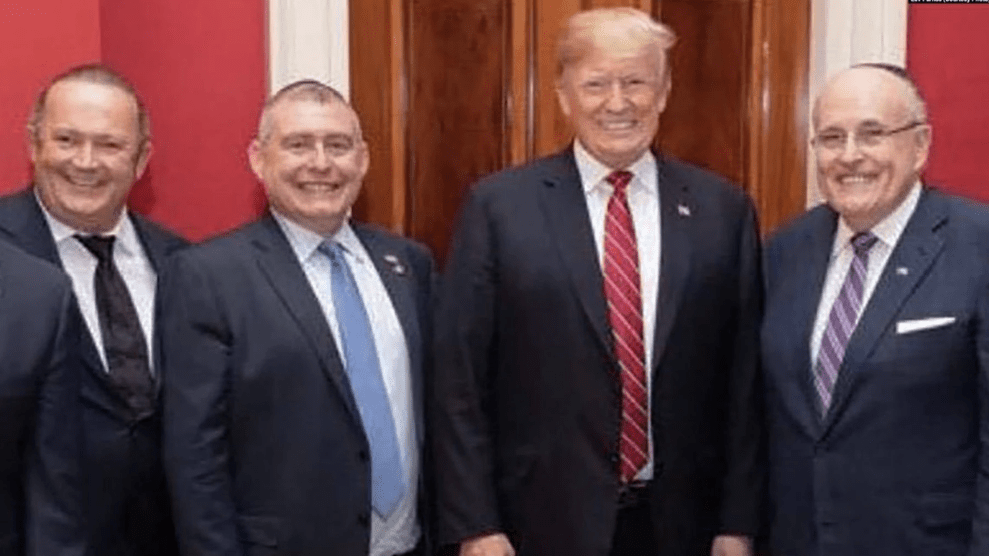 Rudy Giuliani has made a bunch of claims about his relationship with Lev Parnas and Igor Fruman, two Soviet-born American citizens who were arrested Wednesday while allegedly trying to flee the country. Giuliani, who is President Donald Trump’s personal lawyer, says that the two men, who federal prosecutors charged with violating campaign-finance law, have helped him seek political dirt in Ukraine on former Vice President Joe Biden and other matters. Giuliani also says he represents Parnas and Fruman, as their attorney, on unspecified other matters. The former New York mayor has also seemed to say he mulled participating in gas deal in Uzbekistan with Parnas. Exactly what went on between Giuliani and the two men is complicated, but it is important: Prosecutors in Manhattan are investigating Rudy’s financial dealings with Parnas and Fruman, CNN reported Thursday. Lest he lose track, here are claims regarding what, exactly, Giuliani was up to with Parnas and Fruman.

This claim refers to Parnas and Fruman’s widely reported role helping to put Giuliani in contact with former government officials in Ukraine who claimed to have information helpful to Trump. They offered information intended to call into question the August 2016 revelation that Trump’s then-campaign chairman, Paul Manafort had secretly received $12.7 million from allies of Ukraine’s former president. The officials also boosted the conspiracy theory that Biden had forced the firing of a Ukrainian prosecutor to stop an investigation into a Ukrainian gas company that hired his son, Hunter Biden.

As part of this work, Parnas and Fruman, also assisted Joseph DiGenova and Victoria Toensing, a husband wife team of attorneys and Fox News pundits, who were also digging for dirt in Ukraine, according to Dowd’s letter.

They hired Giuliani as their lawyer: Giuliani has also repeatedly claimed that he works for Parnas and Fruman. Giuliani has said little about what they hired him for or when, though the New York Times reported Thursday that Parnas hired Giuliani last year to represent a company he runs, called Fraud Guarantee, and has paid him hundreds of thousands of dollars. In May, Giuliani tweeted that Parnas and Fruman “are my clients” and that he advised them to press charges against a notorious Ukrainian oligarch, Igor Kolomoisky, an ally of Ukrainian president Zolodymyr Zelensky, who had criticized them. Giuliani has also cited attorney-client privilege in declining to detail his work with Parnas and Fruman. And Dowd, in his letter, said the two men “have also been represented by Mr. Giuliani in connection with various personal and business affairs.” In a text message Thursday, Giuliani said that his representation of Fruman and Parnas did not relate to actions for which they were indicted. Giuliani has no apparent role in defending Parnas and Fruman against the criminal charges they face.

They had other business with Giuliani: Giuliani also seems to have suggested other financial involvement with Parnas. In a October 7 article, the Associated Press reported that Giuliani met on March 24 at the Trump International Hotel in Washington with Parnas and woman named Healy Baumgardner, a former Trump campaign advisor and onetime Guiliani spokesperson who runs a Houston based firm called the “45 Energy Group,” a so-called “government relations, public affairs and business development practice” firm. “Giuliani, Parnas, and Baumgardner were there to make a business pitch involving gas deals in the former Soviet bloc to a potential investor,” the AP article says. Giuliani claimed the deals discussed in this meeting involved Uzbekistan, not Ukraine. “I have not pursued a deal in the Ukraine. I don’t know about a deal in the Ukraine. I would not do a deal in the Ukraine now, obviously,” Giuliani told the AP. “There is absolutely no proof that I did it, because I didn’t do it.”

Giuliani apparently hoped to participate in this Uzbekistasn deal, not just act as an attorney. Per the New York Times, Giuliani and his associates hoped to be paid “at least $100,000 for the project, on which Mr. Parnas offered advice.” In another text message Thursday to me, Giuliani said the Uzbekistan deal “has nothing to do with” Parnas and Fruman. Asked why Parnas was in the Trump Hotel meeting then, Giuliani did not respond.

To review, Trump’s former lawyer, Dowd, and current lawyer, Giuliani, both say they represent Parnas and Fruman. (Manafort’s former lead counsel, Kevin Downing, also represented Parnas and Fruman at a hearing in federal court in Virginia on Thursday, saying he was “asked” to help them before they are dispatched to New York.) Giuliani says Parnas and Fruman helped him work for Trump seeking dirt on Biden, and that he worked for them on other matters. Also he may have talked about doing a gas deal with Parnas in Uzbekistan. Having trouble tracking all that? It seems like Giuliani is too.