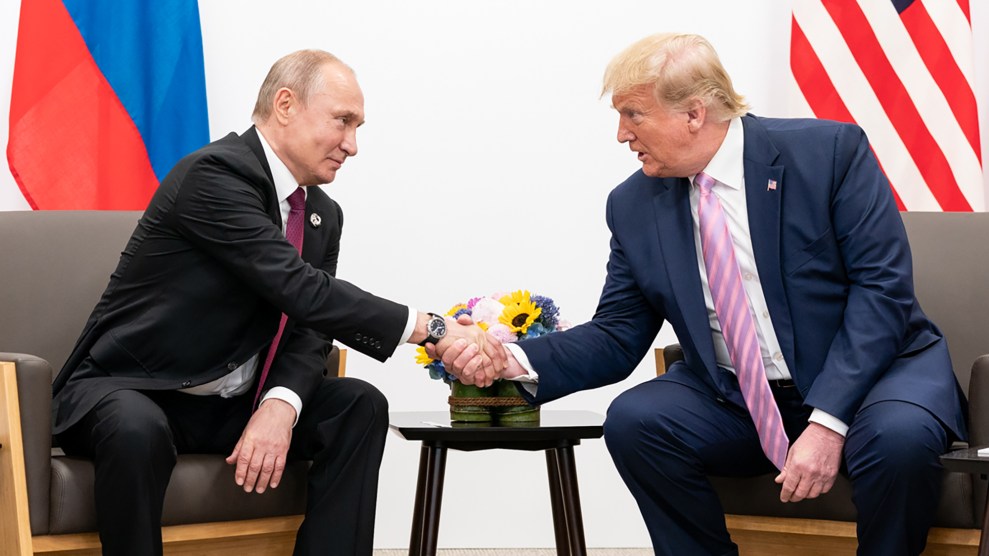 President Donald Trump participates in a bilateral meeting with Russian President Vladimir Putin during the G20 Summit on June 28, 2019, in Osaka, Japan.White House/ZUMA

As President Donald Trump battles impeachment, key allies have rallied to his defense: close GOP lawmakers in Congress, Fox News, and far-right internet users. And then there is the ally that Trump doesn’t like to talk about: Russia.

Russia helped elect Trump, and as he faces impeachment, Russian state media is standing behind him. Propaganda outlets RT and Sputnik, which target Americans with English language content, provide a clear view of Russian messaging on the Ukraine scandal and Trump’s impeachment. Together, they present a picture of a propaganda machine working to exonerate Trump, condemn former Vice President Joe Biden, and spread doubt about the trustworthiness of American government.

The particulars of the Ukraine scandal make a natural fit for the Kremlin’s playbook for destabilizing western democracies: sowing distrust of authority and turning corruption into a “both sides” problem, encouraging citizens to resign themselves to grift and propaganda. That Russian media has jumped on stories that paint the scandal as a deep state coup—a theory that Trump himself has dangerously expounded during the Mueller investigation—is predictable.

The dynamic was on display on Monday morning, after Trump falsely accused the intelligence community of changing its rules to allow whistleblower complaints to contain second-hand information.

RT picked this up and ran with it, running multiple segments that parroted Trump’s soon-debunked claim that this had occurred, and that it was evidence of a deep state operation against Trump. In one video shared on twitter, Ray McGovern, a former CIA analyst and RT regular who argues Russia’s 2016 hacking of the Democratic National Committee was an inside job, is quoted speaking conspiratorially about a group of “people who are behind all this,” as the segment emphasizes the narrative that the whistleblower’s complaint is untrustworthy because it involved second-hand information.

Trump wants to meet the anonymous whistleblower who caused his impeachment inquiry pic.twitter.com/TpCBcpQS1E

Russian media has also worked hard to portray Biden as the corrupt figure in the scandal. The president set off the whistleblower complaint by using his office to pressure the president of Ukraine, Volodymyr Zelensky, to help him investigate Biden, a political rival. Trump’s claim—now repeated by Russian media—is that Biden withheld money from Ukraine in order to force the ouster of a Ukrainian prosecutor general who was investigating an energy company that his son, Hunter Biden, sat on the board of. The allegations have not been borne out by the facts: the prosecutor Biden helped push out was widely seen as corrupt and was not actively investigating the company. But with impeachment underway, the president has continued to argue that it is Biden who should be scrutinized—and Russian media is doing just that.

“While the transcript from Trump’s call does show that he asked Zelensky to look into the Bidens’ corruption as a favor, it does not show him using money as leverage or demanding anyone’s job in the same obvious way that his rival did just a few years ago,” RT correspondent Rachel Blevins stated last week on a show hosted by Scottie Nell Hughes, a former director of the Tea Party News Network and a former CNN contributor who has run multiple segments about Biden’s alleged corruption during her show on RT.

The Ukraine scandal is “such a perfect thing for them” according to Bret Schafer, who tracks Russian propaganda at the Alliance for Securing Democracy, an initiative of the German Marshall Fund of the United States. This is true not only because it fits into their destabilizing efforts, but because it also revives the narrative that Russian interference in 2016 was faked by Democrats and anti-Trump bureaucrats.

With events moving so quickly, Schafer believes that Russia is still developing a unique, and likely conspiratorial, narrative about the Ukraine allegations. “I’m waiting for them to find the angle to this that is different—that is really unique to the Russian perspective,” he says. One possibility already hinted at is the conspiracy theory that it was Ukraine, not Russia, that meddled in the 2016 elections.

“I’m waiting for them to find the angle to this that is…really unique to the Russian perspective.”

Last week, RT focused on a piece of the scandal that has gotten comparatively little attention from US media: Trump’s request that Zelensky investigate CrowdStrike, an American cybersecurity firm that the Democratic National Committee hired in 2016 to determine if it had been hacked, ultimately uncovering two sophisticated Russian intrusions into the committee’s network. According to the White House’s call record of Trump’s conversation with Zelensky, Trump asked Zelensky to investigate the company, suggesting without evidence that the DNC’s server may currently be in Ukraine. It’s not clear why the president might believe this, and the notion that any one server could be revelatory seems misguided: the DNC told a federal court this year that more than 140 of its servers had been affected. Conspiracists have baselessly alleged that CrowdStrike, which is headquartered in California, not only has meaningful links to powerful Ukrainians, but that it manufactured evidence of the DNC  hacks even though Trump’s own Department of Justice has affirmed in court that it has “independently verified” the company’s conclusions.

Trump’s CrowdStrike ask seems to be part of a larger effort among him and his allies (including Attorney General William Barr’s efforts to investigate the origins of the FBI’s Russia probe) to construct an alternate reality in which Russian interference in the US election was somehow a hit job pulled off by Democrats and the deep state.

“The Ukraine-CrowdStrike server angle seems like an avenue that has been less traveled that they can work a little bit harder to keep it in the bloodstream,” says Schafer. “I would not be surprised if we saw them go a bit more in on that in the coming weeks.”

“It’s not known right now if CrowdStrike’s server really is in Ukraine,” RT host Rick Sanchez said on his show last week. “The president seems to be saying so… But the president’s off-handed—maybe ‘calculated’—mention of this CrowdStrike issue, it could set off a new round of questions of whether Democrats were using a server on a foreign soil for their own political gain. As Yogi Berra would say, ‘curiouser and curiouser.’”