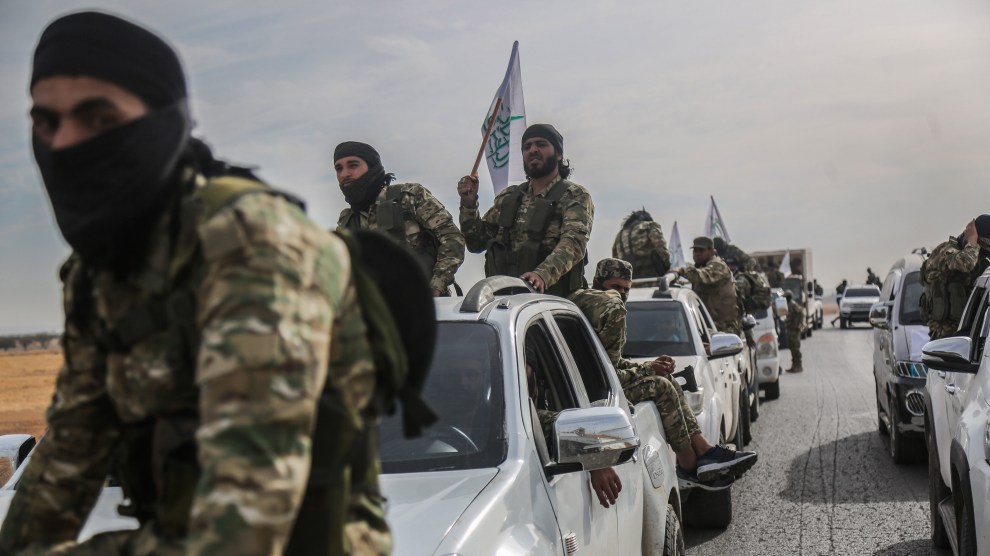 Soldiers of the Turkish-backed Syrian National Army prepare to take part in the Turkish-led assault on northeastern Syria. Anas Alkharboutli/Zuma

President Donald Trump’s sudden withdrawal of United States forces from Syria last week has pitted US allies against each other, liberated ISIS prisoners and terrorist detainees, strengthened the positions of Syria and Russia, and left the region in turmoil. Without US troops preventing Turkish forces from attacking the Kurds—who had been longtime allies in the fight against ISIS in northern Syria—Turkey has swept into the region. Now it’s bombing Kurdish territory and attacking Kurdish fighters and civilians.

More than 160,000 people have been displaced from rural Syria as a result of the fighting, according to the UN, which estimates that 400,000 civilians will require aid because of the violence. The BBC reports that at least 11 civilians have been killed.

In 2018, Mother Jones reporter Shane Bauer traveled to Syria to document the United States’ involvement there. He met the Kurds who Trump effectively gave Turkey permission to kill. On this week’s episode of the Mother Jones Podcast, Bauer dials in for a conversation with host Jamilah King about what’s going on—and what’s next in one of the 21st century’s bloodiest catastrophes.

Listen to the full episode, or read a lightly edited transcript, below.

Shane, let’s start with your gut-level reaction to this week’s news. Tough doesn’t even begin to describe it.

It’s a shock, honestly. It’s not something that was unexpected, but still, the way that the developments in Syria have unfolded have been really quick and really dramatic. It feels devastating.

The region of northeast Syria that I’ve been to a couple times in the last year was quite stable. It was a kind of safe area where refugees from other parts of the country had come, and it’s now a war zone being invaded by Syrian proxies for Turkey. It’s being shelled by Turkey over the border. The Syrian regime is moving to grab what parts of the country that it can, so everything is up in the air right now. But it all seems to have been quite destabilized.

What has hit you the hardest?

There have been, in just over a week, 160,000 people displaced. It feels like a brand new phase of the war, which has been going on for eight years. What has impacted me the most about this particular case is that this was directly caused by the United States. Trump made a very sudden decision to pull troops back from the border with Turkey, essentially allowing Turkey to launch an invasion—which it has been wanting to do for a very long time—against the Kurdish forces, which Turkey considers an enemy, but who control the area.

“What has impacted me the most about this particular case is that this was directly caused by the United States.”

These people have been allies of the United States in the war against ISIS. The Syrian Democratic Forces have lost about 11,000 people in the war against ISIS with the cover of American airpower. As soon as that war was finished, the US essentially tossed them to their main enemy, which is Turkey. So it really looks like a stab in the back to these people who we were fighting alongside, and who we were essentially protecting.

What are you learning from people on the ground or closer to the conflict? I guess it’s made even harder by the fact that you’re a journalist, and journalists themselves are fleeing, but what can you tell us?

There were some international journalists there several days after this US pullback was announced. As far as I know, all of them have left. The Syrian Democratic Forces have been forced to make an agreement with the Syrian regime, which they had not been allied with in the past. Because of this agreement, journalists have feared that the regime will come back, and they could potentially be arrested.

I’ve been relying on reporters in the region who are talking to local officials, both in Turkey and Syria. So it’s really a combination of all this, and then trying to suss out all of the contradictions that appear on social media whenever there’s a quickly developing situation.

You mentioned that you’ve been in this area a couple of times in the past year. Describe who’s there and what it’s been like when you’ve been there.

The area that we’re talking about is about a third of Syria. It’s the northeast part of the country. It has several small and medium-sized cities. It encompasses most of the Kurdish area. Kurds are the largest minority in Syria, outside of its Arab population. And it also includes territories formerly controlled by ISIS, like the city of Raqqa and the far east of the country, which is very rural.

Being there, generally it has felt safe, especially in the Kurdish areas where there was this grassroots system of democracy. People actually had their own small system where they would elect local representatives and work out political issues, really on the neighborhood level, and then send representatives to higher and higher bodies. So there was an actual functioning system of this very unique type of grassroots democracy. There was a sense of hope and excitement.

Why did Turkey want to invade this part of Syria?

The group in control of that part of Syria is a party that is allied with the PKK, which is a Kurdish party in Turkey. It is a left-wing party that has been fighting the Turkish state at various times since then 1980s. The group in Syria, however, has not been fighting Turkey. But Turkey has always been threatened by the existence of this group, and Turkey has been waiting for any opportunity to strike.

You mentioned the Kurds have been US allies. What have been the biggest successes of the US–Kurdish alliance in the past?

In Syria, it’s the defeat of ISIS. It was really the alliance between the Kurds and their allies in the Syrian Democratic Forces and the US Special Forces and their airpower that was able to ultimately defeat ISIS. It was a years-long war that they fought together, taking city by city, and it was a very destructive war. The city of Raqqa was destroyed with US airpower, but last year, ISIS lost the last bit of its territory.

These ISIS captives have been under the control of the Kurdish-led forces. A lot of these ISIS prisoners are internationals. This is something that President Trump has brought up: The countries they come from generally are refusing to take them back. There are thousands of ISIS prisoners in northeast Syria, and since this Turkish incursion started a week ago, there have been escapes. There are major fears of a prison break.

Speaking of Trump, he seems to be getting away with the idea that Americans simply won’t care. He tweeted that Syria was 7,000 miles away. Is he right?

It seems to me there has been a pretty strong reaction in the US, including among Republicans, who have chided Trump for turning against our allies. I think it remains to be seen where this is going. Trump has said he’s going to put sanctions on Turkey because of their actions in Syria. It’s a bit strange because everybody knew this is what would happen if the US gave the green light like it did. I’ll be curious to see whether these sanctions whitewash what Trump did, and how Republicans will react to that.

Finally, what would you like American audiences—our listeners—to keep in mind as they try to get their heads around this ongoing catastrophe?

The part about this that Americans are paying attention to is the ISIS threat, and this is a major concern. These people all breaking out of prison is obviously not going to be good for anybody. At the same time, it’s important for people far away from Syria to understand that this is a part of Syria that has had a relatively normal life. This is a place where children are going to school, families are working, people are meeting in cafes. It is the closest that Syria has had in a very long time to normalcy, and suddenly, people’s live are being ripped apart. People are having to flee, people are being killed. There have been civilians executed on highways or activists being killed. This is being perpetrated by our ally, Turkey. This is a member of NATO. This is not ISIS. These are people that are close to us, that we support.

Listen to the entire interview on The Mother Jones Podcast here: