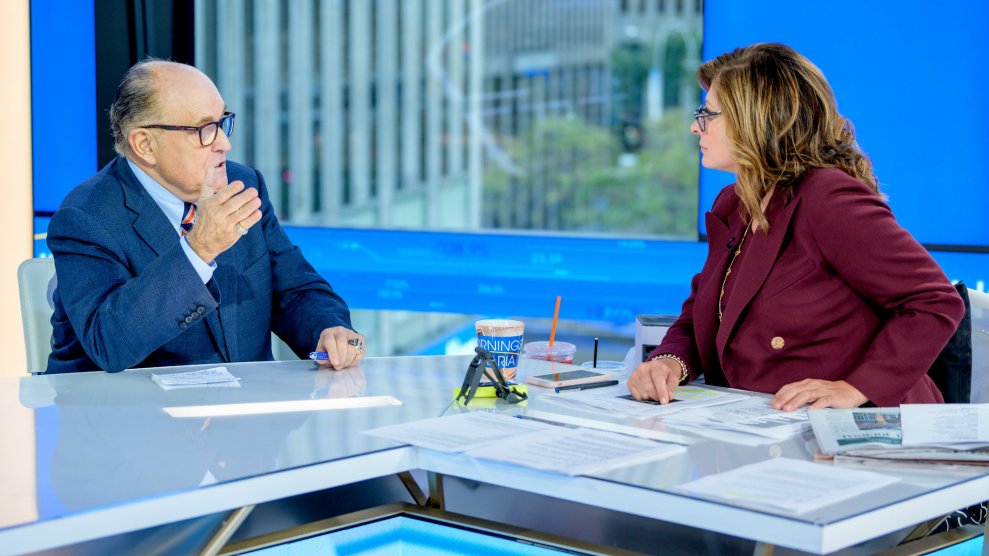 We live in an age where disinformation is a serious and dangerous threat to our democracy. And that has never been more apparent than in the past couple of weeks, when the details of a phone call between Donald Trump and Ukrainian President Volodymyr Zelensky—in which Trump pressured the Ukrainian leader to investigate Joe Biden and his son in exchange for foreign aid—sparked an impeachment inquiry into the president. Just like with every other scandal President Trump has been involved in, he has dismissed each emerging detail about the Ukraine call as “fake news” or a “witch hunt.” And that go-to defense—to blatantly lie or dismiss proven facts as “pure fiction”—is echoed by his administration, allies, and base like never before.

So far, Trump has made 12,019 “false or misleading claims” since he’s been in office, according to the Washington Post. But while facts don’t matter to the president, they do matter to the public, and with the prevalence of so much disinformation being spread out in the world—from the Ukraine scandal to right-wing conspiracy theories such as the deep state, Q Anon, Pizzagate, and others—the role of fact-checking in the media has never been so vital. But how effective is fact-checking for dissuading the spread of misinformation, especially in the world of broadcast news? When cable news anchors like CNN’s Jake Tapper or MSNBC’s Rachel Maddow confront and challenge Trump administration officials on false claims live on air, does that actually change people’s views on issues like immigration, climate change, or Russia’s role in Trump’s election? Put simply: Do facts matter, or are people just going to believe what they want to believe?

To find out, I spoke with Brendan Nyhan, a professor of government at Dartmouth College who focuses on misperceptions in politics, about the role of fact-checking in media.

How effective is on-air fact-checking?

That’s a good question. I think that approach of aggressive fact-checking on television and interviews with newspapers is a good idea. What people believe can be confusing and emotional to an average person when there are competing claims going back and forth that may be hard to sort out. So it’s easy to imagine people relying on their partisan priors as far as what side to believe in the moment.

But I would make two points: The first is, in general, the cumulating body of research that’s out there suggests that fact-checking can help improve belief accuracy on the margin. It’s not a fantasy that people do tend to move in the direction of the information that they’re given, in terms of the effect on their beliefs. So, it does help. Fact-checking should, on average, improve the accuracy of people’s beliefs.

The other point, though, is that live fact-checking in particular may help deter elites from overrating the importance of fact-checking as a response to misinformation, and underrate it as a way to deter elites from promoting this information in the first place. So if you’re going to go on TV and be embarrassed for saying false things, you might not make those claims in the first place, because the extent to which the media will not tolerate the kind of open dissembling that we’ve so often seen from figures in this administration will influence their calculations going forward about what they will say. Trump himself, obviously, is undeterred, but other figures in the administration may be more sensitive to how they’re covered. Even Trump might be more extreme if he weren’t fact-checked so aggressively.

The other thing is live fact-checking sends a cue to other members of the media about what kinds of falsehoods are being promoted and encourages them to similarly hold those claims up to scrutiny in their own reporting. The kinds of people who watch Jake Tapper are political junkies and news obsessive—they’re not normal people by default. If they’re watching cable news at 4 in the afternoon, they’re a very small minority of Americans. But those clips reach a larger set of journalists who, in turn, are providing news coverage that is reaching a much broader swath of the public. And in that way, fact-checking can have a more important cumulative effect.

What’s the best way for live fact-checking? Is the aggressive Jake Tapper way of confronting his guests into submission more or less effective than others?

I’d like to see news organizations being judicious about the extent to which they put people on air in the first place. Live fact-checking is a difficult enterprise and it’s one that people have a tough time doing effectively. Running video of the president talking is cheap. And it’s interesting to people, so there’s a temptation to do it. If you’re equipped to engage in effective live fact-checking, then I think that can be an appropriate news decision, but I think there needs to be a rethinking of just taking live video when you’re not prepared to adequately scrutinize it for your viewers.

And the same thing with these confrontational interviews. Every so often it’s important to plant a flag and challenge the talking points that are being offered on something important. But at some point it becomes a pointless exercise. Many organizations seem to have stopped booking Kellyanne Conway for this reason, because the interviews with her became kind of Dada nonsense-type conversations. There was no news value.

I’m starting to feel like it’s getting that way with Rudy Giuliani. It seems like shows are booking him more because he’s going to say something crazy than an actual value-add to the impeachment conversation.

Right. This is where the public service goals and the ratings orientation of the media are in direct conflict. It’s hard to imagine most cable news food fights informing people, but having Rudy Giuliani on will get people to tune in and create viral clips and bring more attention to your show, and so of course there’s incentive to keep booking him. Look, the media has to get serious. We’re talking about the impeachment of the president of the United States. The stakes are extremely high here and I think there’s a temptation to just treat it all as silliness and a food fight, but this is deadly serious. And journalists have to do their job.

What comes to mind when you think of a good example of on-air fact-checking? What more can be done by the media?

There’s a couple of different models. CNN and MSNBC, in some cases, will have their anchor break in and clarify. In other cases, they’ll run graphics next to the video debunking what President Trump or other speakers are saying. In other cases, the chyron itself will contain a fact-check of the statement the speaker is making, and then that’s hopefully affirmed after the statement is aired, so that viewers are left with accurate information. So, there’s a number of different models.

In some ways, the worst coverage of this administration has not been the fact-checking itself—which, when it’s done, I think generally has been laudable—it’s the “Trump said X” style of coverage, which is still quite common because it’s cheap and easy and fast. So, Trump tweets something and it’s immediately amplified across the spectrum—on Facebook, on websites, and sometimes straight on to the television. It’s often the case that those initial reports on whatever Trump claimed lacked context or fact-checking. Maybe down the road that kind of context is added, but of course people may not be exposed to those follow-up reports. We’ve seen this pattern for a long time, that those initial reports get the most coverage, and the follow-ups saying, “Actually, the truth is something else,” get much less.