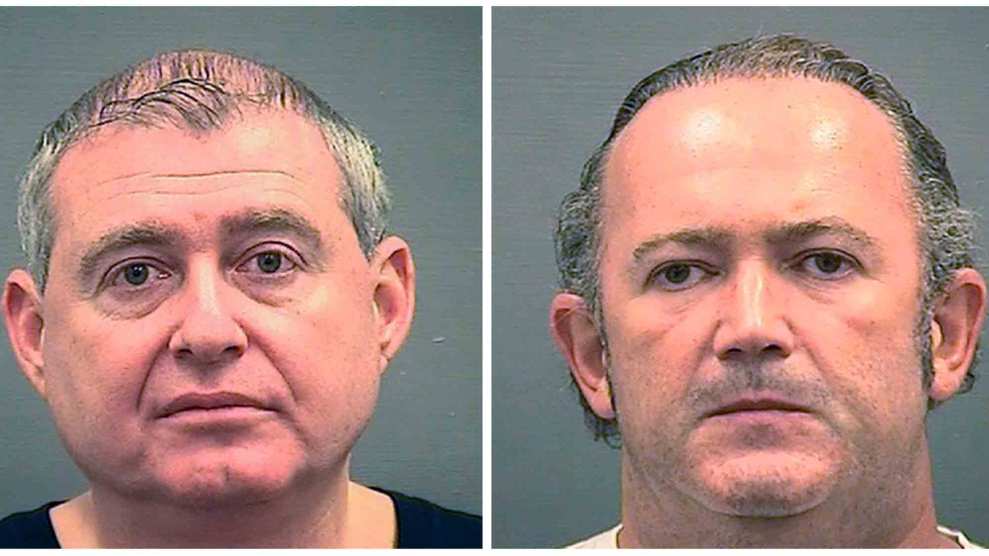 When the US attorney for the Southern District of New York charged two associates of Rudy Giuliani and two other men on Wednesday with campaign finance violations, the indictment contained a big mystery.

Lev Parnas and Igor Fruman—who had been helping Giuliani search for dirt on Joe Biden and the Democrats in Ukraine—and David Correia and Andrey Kukushkin, who were each identified as businessmen, were charged in what seems to be overlapping capers. Parnas and Fruman allegedly made secret donations to Republicans in an effort to advance their business interests and promote the agenda of one or more Ukrainian officials (which included firing the US ambassador to Ukraine). And these two Giuliani confederates also teamed up with Correia, a business partner of Parnas, and Kukushkin and allegedly made donations secretly financed by a Russian national to Republican candidates for state offices in Nevada to buy influence they could use to set up a cannabis business there. This Russian, who would be part of their legal marijuana venture, sent $1 million from overseas accounts to Fruman that was to be used for contributions to federal and state candidates in Nevada and other states, according to the indictment. It’s illegal for a foreigner to funnel donations to US candidates.

The mystery: Who is this wealthy Russian who allegedly tried to make illegal contributions to US politicians in pursuit of launching a cannabis venture?

The indictment does not say. It refers to this individual only as “Foreign National-1.” And the question cannot be yet answered definitively. But California state records and emails obtained by Mother Jones indicate that a Russian businessman named Andrey Muraviev had previously worked with Kukushkin to develop a cannabis enterprise.

In 2016, Kukushkin and Muraviev joined with a Sacramento businessman named Garib Karapetyan, who has been involved in the recreational marijuana business, to create a corporation called Legacy Botanical Company LLC, which was listed at a Sacramento address, according to a filing with the secretary of state in California. (Two years earlier, Karapetyan lost an arbitration case filed by Philip Morris USA after he registered the domain name marijuanamarlboros.com.) In emails Kukushkin sent in 2016 and 2017, he described his desire to acquire medical cannabis dispensaries in California and engage in other legal pot projects. In one email, he cc’d Alexander Mikhalev, whose LinkedIn profile identifies him as the chief financial officer of Parus Capital, a fund that Muraviev established in 2008. In another email, Kukushkin expressed interest in developing cultivation facilities in Northern California’s Sonoma County and referenced “contributions” he was willing to make to win licenses to run cannabis businesses there.

One cannabis business consultant in California tells Mother Jones that Kukushkin, while he was seeking investment opportunities in the cannabis field in California and Oregon, said he was representing “a large agricultural and materials businessman from Russia” and identified him as Andrey Muraviev.

Muraviev does not have much of a public profile in the United States. His Wikipedia page says he was born in 1974. According to a filing with the Securities and Exchange Commission, he graduated from Kemerovo State Technical University in 1997 with an economics degree and also graduated from San Francisco State University in 1998 with a finance degree. He is the founder of Sibir Cement, one of Russia’s largest cement companies. It has facilities across Siberia. As of 2012, his Parus Capital, a Russia-dedicated investment fund, had $50 million to invest. The fund, according to his Wikipedia page, finances “food production, the IT industry, real estate, and in construction of new cement plants.” Muraviev has also been a director of QIWI, a publicly traded Russian electronic payment service provider that is headquartered in Cyprus. His names is sometimes spelled “Muravyev” or “Muravyov.”

In 2012, an investment group filed a complaint with the Russian government contending that Muraviev and others had engaged in wrongdoing related to a development company that had gone bankrupt; its claims included the accusation that Muraviev and associates had drawn funds out of the company for their own “illicit enrichment.” It could not be determined if this complaint was ever investigated or confirmed by the Russian government.

Mikhalev, the CFO of Parus Capital, did not respond to a request for comment.

The indictment states that in early September 2018, Parnas, Fruman, Correia, Kukushkin, and the Russian national met in Las Vegas to discuss their business venture and that “shortly after that” the four Americans “began to formalize” their deal with the Russian to “fund their lobbying efforts.” But, it adds, they “took steps to hide” the Russian’s involvement in the venture and in any “political contributions associated” with the project. That was due to, as Kukushkin supposedly put it, their backer’s “Russian roots and current political paranoia about it.” (On September 14, 2018, Kukushkin and Correia formed a company in Nevada called Strategic Investment Group.)

According to the indictment, the cannabis venture went nowhere. Kukushkin and his associates failed to apply for a recreational marijuana license in Nevada by September 2018, the then-deadline. At the end of October 2018, Kukushkin told the Russian they were “2 months too late to the game unless we change the rules,” but he added that contributions—covertly funded by the Russian—to a particular Nevada state official could lead to the “green light to implement this.” The indictment cites two $10,000 contributions this group made to Nevada candidates using the Russian’s money. And these donations appear to have gone to Adam Laxalt and Wesley Duncan, then the Republican candidates for governor and attorney general. They each lost in the election that year.

The indictment says that Parnas, Fruman, Correia, and the Russian continued to meet into the spring of 2019, but no project ever materialized.

It’s not clear if Muraviev is the Russian cited in the indictment. Perhaps Kukushkin has worked with more than one wealthy Russian businessman eager to enter the American pot market. For now, Kukushkin is not talking, according to his lawyer. Neither are Parnas, Fruman, and Correia. And so far, not a single Russian has come forward to claim credit for underwriting the alleged criminal activity of Giuliani’s dirt-digging pals and their comrades.