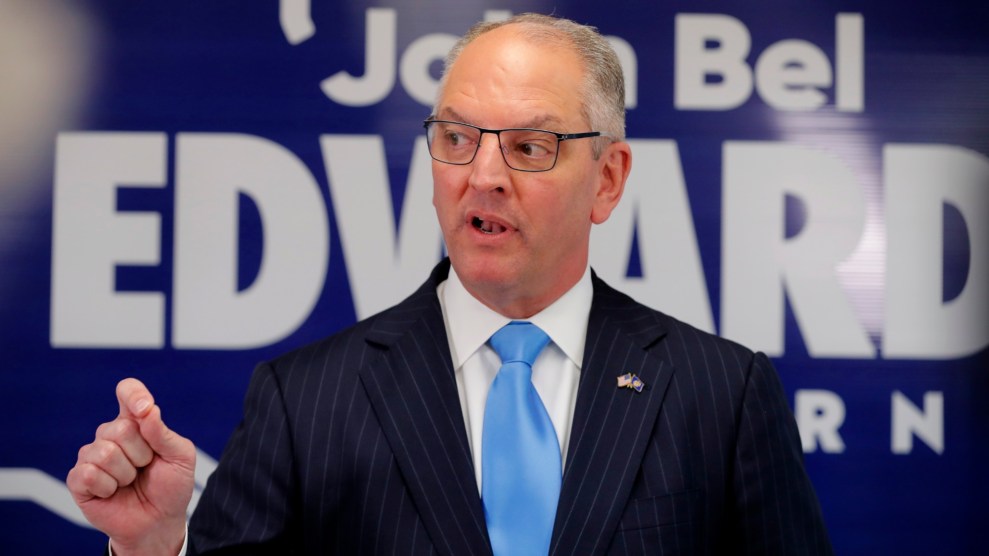 In a major show of strength in a deep-red state, Democratic Louisiana Gov. John Bel Edwards has defeated his Republican challenger, Eddie Rispone, whose frequent attempts to nationalize the election by bringing in President Donald Trump proved futile in Saturday’s gubernatorial election.

Edwards, who has served as governor since 2016, would be the first person to admit that he doesn’t fit the national Democratic mold. Despite the party’s steady movement to the left on reproductive rights, Edwards has remained staunchly anti-abortion. In May, he signed a “fetal heartbeat” bill, which banned abortions when an ultrasound can detect a heartbeat, usually around six weeks—before many people know they’re pregnant.

At the time, Edwards received fierce pushback from progressive activists in the state:

Sally O. Donlon, an assistant dean at the University Louisiana at Lafayette and a member of the Lafayette branch of the Louisiana Democratic Party, recalls the betrayal many of Edwards’ female supporters felt when he signed the heartbeat bill into law. “After his signing of the recent so-called heartbeat bill giving preferential treatment to a clump of cells over fully actualized women, we were very angry, and a lot of us came out and said that we would never support him,” she says.

Edwards, like other Southern Democrats, relies heavily on the support of African Americans, who make up 57 percent of registered Democrats in Louisiana. His failure to reach 50 percent of the vote in the October 12 “jungle primary” and avoid a runoff was likely due in large part to lower turnout among African American voters, says Robert Mann, a political historian at Louisiana State University. Edwards’ decision to tout his pro-law enforcement stance in campaign ads probably contributed to the lack of enthusiasm among black voters.

However, his decision to expand Medicaid early in his tenure as governor won him major points among his Democratic base and may have helped propel him to victory. Two years after the state’s Medicaid expansion, the rate of uninsured had fallen by half, from 22.7 percent in 2015 to 11.4 percent in 2017. Edwards’ position on Medicaid also created a stark contrast between him and Rispone, who vowed to “freeze” all new enrollment into Medicaid in the state.

Edwards’ brand of economic populism mixed with conservative abortion politics makes him an outlier in today’s national Democratic Party. However, his victory on Saturday shows that there may still be a place for an anti-abortion Southern Democrat in an increasingly progressive party.