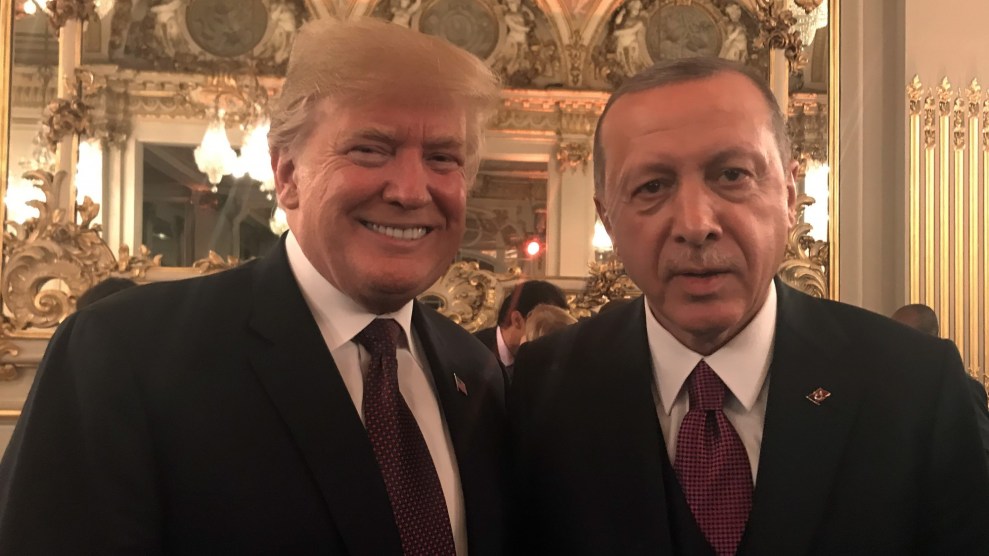 The effects of Turkey’s invasion of northern Syria are still rippling through the Middle East, as the Kurds—who until recently were America’s staunchest allies in the fight against ISIS—face the prospect of ethnic cleansing. Meanwhile, Russia, Iran, and Bashar al-Assad’s Syrian government all stand to benefit from President Donald Trump’s decision to green-light the Turkish offensive. But as with any international crisis, American lobbyists are ready to profit, too.

Chief among them is Greenberg Traurig, a white-shoe law firm with a scandalous history that has recently become Turkey’s top lobbyist and a key part of the country’s massive influence campaign in Washington. Greenberg has accepted more than $6.6 million since 2014 to lobby on behalf of Turkey’s government, even as the country’s leader, Recep Tayyip Erdoğan, has grown increasingly authoritarian—brutally suppressing dissent and imprisoning more journalists than any other country.

Since Trump took office, Turkey has nearly doubled its spending on lobbying in DC, according to Al-Monitor, a news site that reports on the Middle East. No less than 21 different lobbyists were registered with the Justice Department on Turkey’s behalf in 2017, including several firms with close ties to the administration. Ballard Partners, which is run by a top Trump fundraiser, received more than $4 million from Turkey; Mercury Public Affairs, a landing ground for several ex-Trump campaign staffers, earned more than $1.6 million representing the Turkish government and outside advocacy groups such as the Turkey-US Business Council and American-Turkish Council.

At Greenberg, a roster of ex-lawmakers-turned-lobbyists has helped promote Turkey’s interests on Capitol Hill. According to Vera Eccarius-Kelly, a Siena College political science professor who has written about Turkey and the Kurds, the firm’s role among the country’s army of lobbyists is to “improve Turkey’s image in the US,” which it has done by cultivating friendly members of Congress, especially the roughly 100 members of the bipartisan Turkey caucus. Four of the registered lobbyists working for Turkey on Greenberg’s payroll are ex-lawmakers who served on committees that oversee the Pentagon and State Department.

Greenberg’s contract with the Turks has been a crucial part of the firm’s renaissance in Washington after nearly a decade of recovering from the stain left by disgraced ex-employee Jack Abramoff, who went to prison in 2008 as a result of swindling millions of dollars from various Indian tribes, among other crimes. Founded by three attorneys in 1967, Greenberg expanded rapidly in the mid-1990s and gained notoriety for representing President George W. Bush during the 2000 Florida recount. By the time of Abramoff’s trial, Greenberg employed 1,500 attorneys in more than two dozen cities, according to the New York Times. The Justice Department never charged the firm itself in relation to Abramoff’s schemes, which made national news for months and ultimately brought down then-House Majority Leader Tom DeLay (R-Texas), But the company took a massive hit. In 2013, Greenberg collected just $3.9 million in revenue—a fraction of the $25.5 million it had earned in 2003, Politico reported.

Abramoff’s scandal may have tarred the firm’s reputation, but it didn’t deal a fatal blow. Various foreign clients, including the Kurdistan Regional Government in Iraq and Mexico’s agricultural ministry, signed on with Greenberg in the years following the trial. In 2014, the firm received more than $130,000 to lobby for Turkey as a subcontractor for the Gephardt Group, which was founded by former House Democratic Leader Dick Gephardt (Mo.). That same year, 13 lobbyists from rival firm Dickstein Shapiro joined Greenberg’s growing Washington, DC, office, including former Sen. Tim Hutchinson (R-Ark.) and ex-Rep. Albert Wynn (D-Md.).

By August 2014, Wynn and Hutchinson had registered to lobby for Turkey and, three years later, Greenberg inked a $1.7 million annual deal with Turkey to support “legislation and other US government action that promotes Turkey’s interests and provides a positive image of Turks, Turkey, and the United States-Turkey relationship.” Former New York Mayor Rudy Giuliani, a Greenberg employee at the time, was not registered as one of the firm’s Turkey lobbyists. But he too helped further Erdoğan’s agenda, pushing Trump in 2017 to extradite a Turkish cleric, Fethullah Gülen, who lives in Pennsylvania and has been accused by Erdoğan of trying to overthrow him. After becoming Trump’s personal lawyer, Giuliani left Greenberg. He has denied ever lobbying for a foreign client, and Gülen, a permanent US resident, has not been extradited. (In 2015, Turkey hired a different firm, Amsterdam & Partners, to organize an influence campaign geared at undermining Gülen and the network of charter schools linked to him.)

In Trump, Erdoğan found a leader especially receptive to one-on-one lobbying. Both of Trump’s efforts to withdraw US forces from Syria—in December and then against last month—occurred after phone calls in which Erdoğan pushed him to do exactly that. Trump has occasionally threatened Turkey with punitive action, but has more often praised Erdoğan and echoed his talking points. Even after the much-maligned Syria invasion, Trump invited his Turkish counterpart to the White House for a meeting on November 13.

Despite these victories, Turkey has found itself increasingly isolated from the United States in other ways. In May 2017, Erdoğan’s reputation took a massive hit stateside after his security forces brutalized a group of protesters outside the Turkish ambassador’s residence in Washington. Twelve Turkish officials were charged with crimes related to the attack, which the State Department condemned as a threat to free expression. Earlier this year, after Erdoğan agreed to purchase a Russian air defense system, the Trump administration ousted Turkey from the American-led F-35 program, a rare rebuke of a NATO ally. Within Turkey, Erdoğan has repeatedly allied with ultranationalist parties, detained several Americans as hostages, and presided over a historic increase in anti-American sentiment.

Even Washington lobbyists, who have seemingly have represented every warlord under the sun, “have gotten more cautious” around Turkey, Eccarius-Kelly told me. Gephardt, for example, stopped working with Turkey at the end of 2016. Ballard dropped the Turkish government as a client in November 2018 and ended its relationship with Turkey’s state-owned bank last month, after it was indicted over an alleged scheme to evade US sanctions on Iran. But in December 2018, Greenberg re-upped its contact with the Turks for $1.5 million through the end of 2019. Along with Wynn, Hutchinson, and two other registered foreign agents, Greenberg also enlisted ex-Rep. J. Randy Forbes (R-Va.) to begin lobbying for Turkey last year.

Turkey’s Syria invasion has only escalated tensions in Washington. For months, Erdoğan had made no secret of his desire to oust Syrian Kurds from their perch near Turkey’s border, citing their links to the Kurdistan Workers’ Party, a revolutionary group that has agitated against the Turkish government since 1984. The Turkish military operation quickly resulted in war crimes, according to the State Department’s envoy to the counter-ISIS campaign. It also created some awkward optics for Greenberg, whose other major foreign client has been the Kurdistan Regional Government, which oversees a semi-autonomous region in northern Iraq that is dominated by ethnic Kurds. The KRG has maintained amicable ties with Turkey, but the invasion severely damaged Turkey’s standing among Iraqi Kurds, who were seen burning Turkish flags in the days following the October offensive.

“If I were Turkey and I knew Greenberg was representing the Kurds,” said Craig Holman, a lobbying expert for the nonprofit advocacy group Public Citizen, “I’d be inclined to look for a different lobbying firm.”

Greenberg did not respond to multiple requests for comment about its lobbying activities. Federal records, though, suggest the firm hasn’t done much work on behalf of the Kurds in recent months. Between November 2018 and April of this year—the last time the firm submitted its quarterly disclosure to the Justice Department—its lobbyists sent six emails on behalf of the Iraqi Kurdish government and reported zero in-person meetings or phone conversations. During that same period, Greenberg lobbyists met with at least 15 lawmakers to discuss US-Turkish relations and emailed the offices of several others. The KRG paid Greenberg just $30,000 during that time; Turkey paid the firm $809,500.

All of which underscores how valuable Turkey is as a client. “They’re reliable payers,” Eccarius-Kelly said, drawing a parallel to another controversial US ally with an extensive influence operation. “If you can’t have Saudi Arabia as your client, the next best bet is Turkey.”