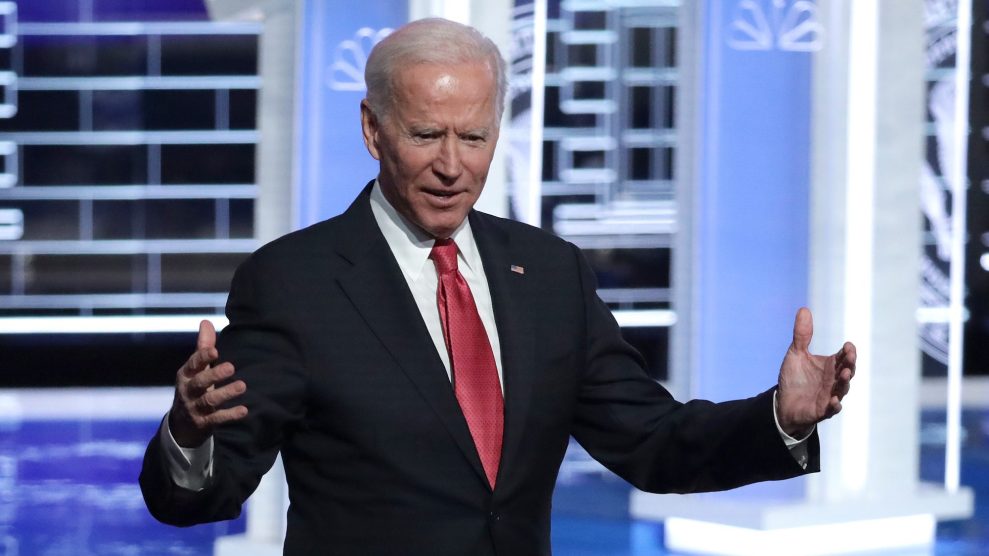 Last week at a town hall in Las Vegas, former vice president and presidential candidate Joe Biden affirmed his stance against legal marijuana—it’s a gateway drug, he reasoned. Tonight, those words came back to haunt him.

“I thought you might have been high when you said it,” New Jersey Sen. Cory Booker said from the debate stage. Citing the inconsistency of the nation’s marijuana laws and its continued disproportionate use against minority communities, Booker continued, “Marijuana in our country is already legal for privileged people, and it’s the war on drugs has been a war on Black and brown people.” Booker went on to highlight that there are more African Americans bound by the country’s legal system than were slaves in 1850.

.@CoryBooker just slammed @JoeBiden over Biden's recent comments on marijuana: "This week I hear [Biden] literally say that I don't think we should legalize marijuana."

"I thought you might have been high when you said it." pic.twitter.com/0ZAa8uZP7H

On the defensive, Biden tried to gesture towards his relatively strong polling numbers with the African American community. “I come out of the black community,” Biden said. “I have more people supporting me in the Black community because they know me, they know who I am,” he continued. “Three former chairs of the Black Caucus, the only African American woman elected to the US Senate, a whole range of people.”

Looking across the stage, Booker immediately fired back, “That’s not true.”

“The other one is here,” said California Sen. Kamala Harris, who is indeed Black.

“I said first!” Biden said. But he hadn’t, and the damage was done.

“My point is,” Biden said, trying to speak over the laughter of Harris and the audience, “one of the reasons that I was picked to be vice president was because of my relationship with the Black community.”

Joe Biden said tonight that he had the endorsement of the "only African American woman" elected to the US Senate, referring to former US Sen. Carol Moseley Braun. But that isn't true.

“The other one is here,” Kamala Harris said. pic.twitter.com/ZP8CFNfQ0h

But Black people were surprised to hear that Biden was picked to be Barack Obama’s running mate because of his great relationship with African Americans, seeing as he launched his last presidential campaign in early 2007 with a racial gaffe. Biden, who was then a senator from Delaware, described his then-opponent Barack Obama as “the first mainstream African American who is articulate and bright and clean and a nice-looking guy.”

When reporters asked him to explain what he meant by that, his answer wasn’t great: “This guy is something brand new that nobody has seen before.” On a press call, Biden assured the media that Obama was not upset and had accepted his apology. ““I didn’t take it personally and I don’t think he intended to offend,” Obama said in an interview with the New York Times.

But several months later, Biden did it again.

During an October 2007 interview with the Washington Post, Biden said the school disparity between Iowa and Washington, DC schools was because the Black population in Iowa was less than 1 percent, and only 4 to 5 percent were minorities. He described children in DC as coming from “dysfunctional homes” with mothers who don’t talk to them in contrast to moms in Iowa who actually speak to their children. “Half this education gap exists before the kid steps foot in the classroom,” he said.

Iowa voters went to the polls the following January. After getting less than 1 percent of the vote, Biden dropped out of the race.