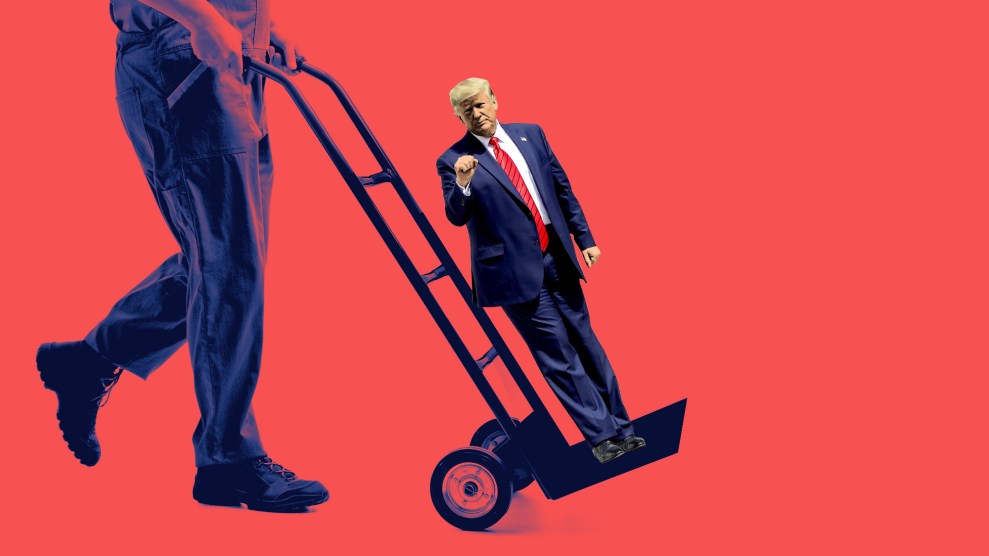 The blood drained from her face as Marie Yovanovitch, the career diplomat removed as the US ambassador to Ukraine, read the reconstructed transcript of President Donald Trump’s July 25 call with Ukrainian President Volodymyr Zelensky the day it was released. There was the president referring directly to her: “The former ambassador from the United States, the woman, was bad news,” Trump told the Ukrainian leader. And as Yovanovitch read on, she came across another Trump statement that seemed menacing: “She’s going to go through some things.” Testifying before the House Intelligence Committee on Friday morning as part of the ongoing impeachment inquiry, Yovanovitch recalled how she had been “shocked,” “appalled,” and “devastated” to see a president undermine and threaten a US ambassador. And about the same time as she was telling the committee this, Trump was blasting Yovanovitch, claiming, “Everywhere Marie Yovanovitch went turned bad. She started off in Somalia, how did that go?” This was a shocking move that even a Fox News anchor likened to witness intimidation.

Yovanovitch’s appearance mainly served to show that Rudy Giuliani, the president’s personal lawyer, conspired with two shady business associates (who have since been indicted for violating campaign finance laws) and corrupt past and present Ukrainian prosecutors to wage a successful smear campaign against Yovanovitch, who had championed anti-corruption measures in Ukraine. But this second day of impeachment hearings showcased an important theme of the Trump years: Trump is a man obsessed with revenge.

The Democrats’ impeachment project has been rather narrowly focused on one episode of Trumpian improbity: Trump exploiting the power of his office to muscle the Ukrainians into producing political dirt he could use against a potential 2020 rival and remove from his electoral victory its Russian stain. Was this an improper or illegal quid pro quo, extortion, or bribery? Did Trump pervert US national security interests to serve his own political and personal desires? These are important issues, but this controversy has also illuminated disturbing aspects of Trump’s character.

Trump’s love affair with vengeance is nothing new. Long before he entered politics, he publicly acknowledged his fondness for retribution. In 2011, he addressed the National Achievers Congress in Sydney, Australia, to explain his success. He noted there were a couple of lessons not presented in business school that successful people ought to know. At the top of his list was one piece of advice: “Get even with people. If they screw you, screw them back 10 times as hard. I really believe it.” In a 2007 speech, he explained his first rule of business: “It’s called ‘Get Even.’ Get even. This isn’t your typical business speech. Get even. What this is [is] a real business speech…When you’re in business, you get even with people that screw you. And you screw them 15 times harder. And the reason is…other people watch what’s happening. Other people see you or see you or see and they see how you react.”

As I noted almost two years ago, “Trump seems to live to settle grudges. For him, retaliation is a religion.” And Trump himself in 2014 tweeted an Alfred Hitchcock quote: “Revenge is sweet and not fattening.”

“Revenge is sweet and not fattening.” – Alfred Hitchcock

Retaliation is a big part of what motivated Trump in the Ukrainian caper. He sought to gather ammo he could use against Joe Biden. But Trump was looking to get even with—or demolish—perceived foes, particularly regarding the Russia scandal. When Zelensky in the July 25 call said Ukraine was interested in obtaining a new batch of Javelin anti-tank missiles, Trump immediately replied by asking Zelensky to first do a “favor”: investigate a crazy conspiracy theory that holds that Russia did not attack the US election in 2016 and that Ukraine was somehow involved in a plot to cover up what really happened. Here Trump was looking to escape the taint of the Russia scandal and trying to absolve the Putin regime of having covertly intervened in an American election. He wanted to settle a score with Ukrainian players whom he believed were out to get him in 2016. (Ukrainian officials that year were worried about Trump, who had suggested he would be happy to let Russia hold on to Crimea, the portion of Ukraine that Vladimir Putin had seized in 2014, and some criticized Trump publicly. They also were troubled to see that Paul Manafort, who had been a consultant for the corrupt and pro-Russia former Ukrainian President Viktor Yanukovych, was running Trump’s campaign.) So Trump was leaning on Zelensky to drop the hammer on a band of Ukrainians who had, as Trump viewed it in his paranoid mind, set up the Russian “hoax” to do him in.

As for Yovanovitch, it remains unclear why Giuliani and his crew were so intent on getting her booted out of Ukraine and spent months disseminating disinformation about her in public and private to achieve that end. She testified, “I do not understand Mr. Giuliani’s motives for attacking me, nor can I offer an opinion on whether he believed the allegations he spread about me…What I can say is that Mr. Giuliani should have known those claims were suspect, coming as they reportedly did from individuals with questionable motives and with reason to believe that their political and financial ambitions would be stymied by our anti-corruption policies.” The implication is that Giuliani and his associates needed Yovanovitch out of the way for financial deals they were seeking in Ukraine. (The two Giuliani pals—Lev Parnas and Igor Fruman—who were indicted for allegedly making illegal political contributions to Republicans in the United States, had sought to convince a GOP House member to complain about Yovanovitch and call for her ouster.)

Whatever the reason the Giuliani Gang had for sidelining this ambassador, they knew how to do it. They spread the accusation that she was bad-mouthing Trump—and they inserted that into the public discourse through conservative media and tweets. And this resonated with Trump. Somehow he made it known that Yovanovitch no longer had his confidence, and the State Department, with no notice, yanked her from Kyiv in May. As she testified, no one at the State Department could provide her with a full explanation of this surprising and sudden move—which undoubtedly originated with the White House. It seems that it was easy for Giuliani and the others to turn Trump against Yovanovitch. Perhaps Giuliani realized that if Trump believed, even without clear evidence, that an ambassador was anti-Trump, that person would not last long. As Trump might say, he would have to screw that person real bad. And how to do that to Yovanovitch was apparently on his mind when Trump was talking to Zelensky.

For the Democrats attempting to establish a case for impeachment, the Yovanovitch piece of the Ukraine tale shows how Giuliani’s “irregular channel” mounted a smear campaign to derail an ambassador, as it helped Trump abuse his office for personal and political gain. But it also reveals a troubling element about the president: He is a man fueled by a desire for vengeance. Revenge itself is not an impeachable offense. But a fixation on vengeance is certainly a dangerous trait for any inhabitant of the Oval Office.