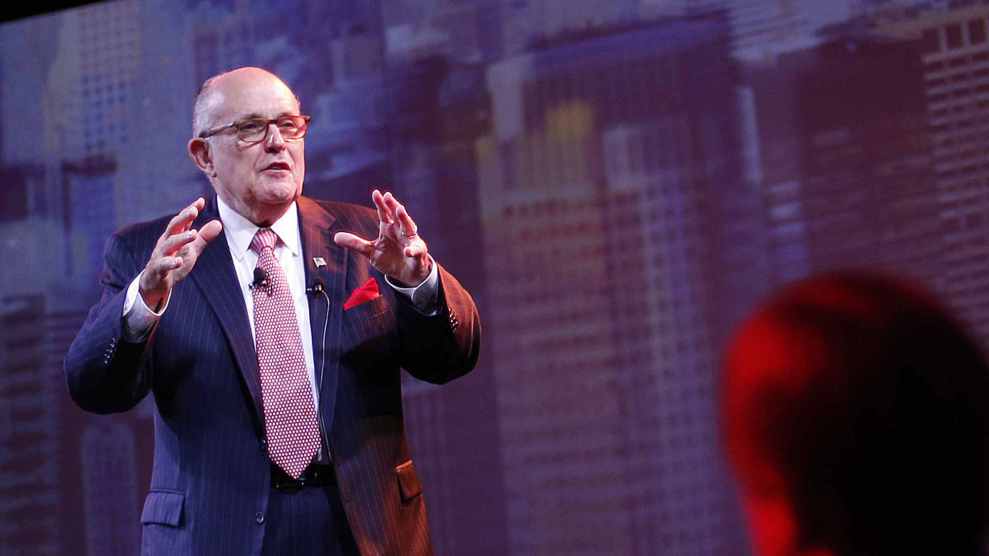 As a candidate, President Donald Trump boasted that he would hire “the best and most serious people.” But as impeachment bears down on his presidency, a lot of his problems may be because he has hired a very bad lawyer.

That man, of course, is Rudolph Giuliani.

Trump brought Giuliani—a former federal prosecutor, New York City mayor, and Republican presidential candidate—onto his legal defense team in April 2018, when special counsel Robert Mueller was actively investigating contacts between Russian operatives and the Trump campaign. It’s unclear if Giuliani did any practical legal work related to that investigation, but he was a public face of the president’s defense, active on television, Twitter, and regularly texting back and forth with reporters.

But as recent revelations have made clear, Giuliani also took on a side portfolio: pushing for the ouster of the US ambassador in Ukraine and trying to get Ukraine to launch investigations into former Vice President Joe Biden and his son, as well as into a conspiracy theory about Ukrainian interference in the 2016 elections.

That project has proven a disaster for his client: A lawyer who sets out to defend a president and instead helps create the basis for his impeachment has not been an effective counsel. If that weren’t enough, here are three other ways Giuliani is not helping.

Giuliani is failing his most basic task of publicly defending his client. With little evidence that Giuliani is carrying out actual legal work for the president, that public role would seem to be his one job. This week he attempted to do so in an op-ed in the Wall Street Journal, describing the July 25th phone call during which Trump asked Ukraine’s president to do him “a favor”:

Allegations of Burisma-Biden corruption weren’t even a major part of the conversation. The focus was on Ukrainian corruption broadly speaking and out of a five-page transcript Mr. Trump spent only six lines on Joe Biden.

The line quickly drew derision on Twitter. There is no word-count threshold for crimes or abuses of power.

He pals around with shady people

Whereas a good attorney will distance their client from criminal exposure, Giuliani has invited alleged criminals into Trump’s orbit. For help with his Ukraine mission, Giuliani turned to Lev Parnas and Igor Fruman, two Florida businessmen born in the former Soviet Union. Both men were charged last month by federal prosecutors in New York with funneling money from a Russian oligarch into US elections. Giuliani himself is reportedly under federal criminal investigation for his related activities in Ukraine. Prosecutors believe he may have been seeking to profit from a gas deal there brokered by Parnas and Fruman, and violated lobbying disclosure laws intended to prevent covert foreign influence by pushing for the ouster of the US Ambassador to Ukraine, Marie Yovanovitch. Trump did ultimately remove the ambassador, who has become a key witness in the impeachment inquiry, publicly testifying on Friday.

“The mere fact that the president is continuing to retain a personal attorney who is at least reportedly under criminal investigation by the federal government is itself a pretty stunning and unique set of circumstances,” says John Bies, an attorney at the watchdog group American Oversight, pointing to reports this week that the federal probe into Giuliani may also include breaches of campaign finance and conspiracy laws.

The legal mess that Giuliani has gotten himself—and his client—into leads to perhaps the most important way that Giuliani is failing as a lawyer.

Giuliani has created an ethically compromised situation. At this point, it might be more legally advantageous for Giuliani to maintain Trump as a client than it is for Trump to keep Giuliani as an attorney. That the opposite of how it’s supposed to be.

“He can’t be the star witness and the lawyer in the same case,” says Laurie Levinson, a criminal law expert at Loyola Law School in Los Angeles. “Most people don’t have a lawyer representing them in a case when their lawyer also has counsel in the same case.”

But this is precisely the hangup Giuliani has put Trump in, and it puts Giuliani in a position where he might be tempted to protect himself by throwing his client under the bus. The lobbying disclosure laws that prosecutors believe Giuliani may have broken contain an exception for legal work. While the Wall Street Journal reported Friday that US prosecutors are examining whether Giuliani was seeking business deals in Ukraine, it is in his interest to portray his work in the country as entirely on behalf of the president’s defense—a claim he has reiterated.

The investigation I conducted concerning 2016 Ukrainian collusion and corruption, was done solely as a defense attorney to defend my client against false charges, that kept changing as one after another were disproven.

But this stance is unhelpful to Trump. As George Conway, a Republican anti-Trump lawyer, has pointed out, this tweet is actually very bad for the president as he faces impeachment. The case against Trump is that he used the powers of his office to advance his own personal interests—a textbook definition of abuse of power. Trump, in response, claims he was simply furthering America foreign policy and rooting out Ukrainian corruption. For Giuliani, Trump’s defense attorney, to insist all the work pushing for investigations was actually in service of his client’s defense undercuts the president’s claims of having been acting on behalf of the national interest.

“This tweet by itself establishes that [Trump] committed an impeachable offense,” Conway wrote, retweeting Giuliani. “To say that Giuliani’s and Trump’s pursuit of ‘Ukrainian…corruption’ was ‘done solely’ to protect Trump’s interests establishes that Trump was not acting for the country.”

“You’re supposed to zealously advance your client’s interests,” says Bies, warning that is harder for an attorney to do once their interests diverge from the client’s.

Giuliani “also has an incentive to reveal things that might be covered by the duty of confidentiality,” said Ken White, a former prosecutor, while predicting how Giuliani’s “severe conflict of interest” might harm his client in an appearance on the podcast All the President’s Lawyers.

The legal profession is supposed to guard people against unscrupulous lawyers through its bar associations’ professional accreditation process. While warning he’s not personally an expert on when a lawyer’s conflicts of interest risk formal sanction, Bies says “at minimum there are significant questions about whether or not he has comported himself consistent with his bar obligations. And a bar counselor should consider that question seriously.”