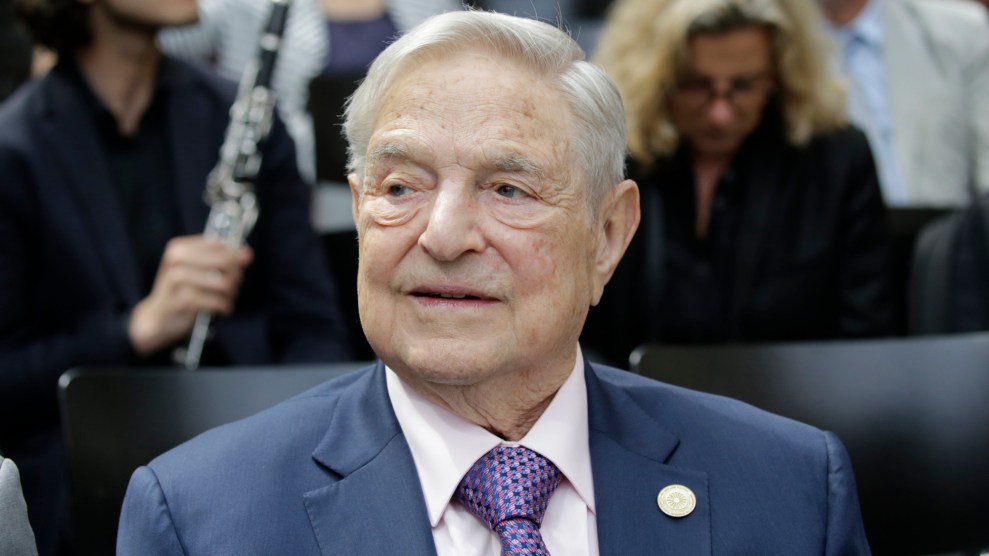 For some of Donald Trump’s most enthusiastic backers, the chief villain of the Ukraine scandal is not Adam Schiff or Hunter Biden. It’s George Soros. The liberal billionaire has long been a favorite bogeyman on the right due to his support for progressive causes at home and political reforms abroad. But attacks on Soros—including conspiracy theories with anti-Semitic overtones—have grown even more prominent since the start of the House impeachment inquiry.

Last week, during an appearance on Lou Dobbs’ Fox Business show, Republican lawyer Joseph diGenova accused Soros of controlling parts of the State Department and FBI and of using “every lever of the United States government” to take over Ukraine. His bizarre rant came weeks after Trump lawyer Rudy Giuliani—who once retweeted a post calling Soros the “anti-Christ”—appeared on several TV news programs to falsely claim that a Ukrainian nonprofit partly funded by Soros’ foundation had fabricated evidence against former Trump campaign chair Paul Manafort.

Today's episode of anti-Semitism in America

A guest on Fox News claimed that George Soros controls the State Department and FBI agents and wants to control Ukraine using the US government pic.twitter.com/qbe5ZU7mMC

DiGenova’s comments were widely condemned; Anti-Defamation League CEO Jonathan Greenblatt for blasted the lawyer for “trafficking in some of the worst anti-Semitic tropes.” But casting Soros—a US citizen who was born in Hungary and survived the Holocaust—as the Big Bad in some nefarious plot is not a new conservative tactic. In October 2018, Fox News even banned one of its regular guests, Chris Farrell of Judicial Watch, for falsely suggesting that Soros had funded a migrant caravan traveling through Central America.

DiGenova’s recent rant, however bizarre and conspiratorial, has its roots in the same material that turbocharged Trump’s interest in Ukraine in the first place—specifically, the work of John Solomon, a former columnist for the Hill. Solomon, who is a longtime client of diGenova’s law firm, has authored a series disputed articles about Joe Biden’s activities in Ukraine and Soros’ interactions with Obama administration officials.

A conspiracy theory about Soros and Paul Manafort

To anyone not following the wider network of Trump-adjacent misinformation, it’s probably not obvious what Giuliani and his allies are talking about when they invoke Soros’ work in Ukraine. Let’s take a closer look at Dobbs’ exchange with diGenova to see how this latest barrage against Soros connects with Solomon’s work and the far-right’s defense of Trump:

DOBBS: John Solomon reported back in March and I want to get this right that [former US embassy official] George Kent had pressured Ukrainian prosecutors to back off an investigation into AntAC, the anti-corruption action center that George Soros group sponsored. This is a complicated deal here. And it seems that he wanted to keep an investigation of Ukrainian corruption with limits on it, even as he answered questions today. Your thoughts, Joe?
DIGENOVA: Well, there’s no doubt that George Soros controls a very large part of the career Foreign Service at the United States State Department. He also controls the activities of FBI agents overseas who work for NGOs, work with NGOs. That was very evident in Ukraine. Kent was part of that. He was a very big protector of Soros. His testimony today showed this kind of stern, sort of discomfort with not being included in certain discussions. But the truth is George Soros had a daily opportunity to tell the State Department through [former State Department official] Victoria Nuland what to do in the Ukraine. And he ran it, Soros ran it. He corrupted FBI officials, he corrupted Foreign Service officers. And the bottom line is this: George Soros wants to run Ukraine, and he’s doing everything he can, to use every lever of the United States government to make that happen—for business interests, not for good government…

The argument here hinges on AntAC, the anti-corruption group Dobbs invoked in his question, which received roughly 17 percent of its funding through 2018 from Soros’ Open Society Foundations. In March, then-Ukrainian prosecutor-general Yuri Lutsenko told Solomon that he was handed a list by then-US ambassador to Ukraine Marie Yovanovitch of several individuals that Ukraine should not prosecute, including a founder of AntAC and two lawmakers supportive of its anti-corruption efforts. Shortly before Lutsenko took office, the prosecutor-general’s office was investigating whether $4.4 million in US aid had been misused by various recipients, including AntAC. As Solomon detailed it in the Hill, the supposed do-not-prosecute list looked like an Obama administration effort to shield Soros.

Kent, in his capacity as the US embassy’s deputy chief of mission, told the prosecutor-general’s office in a letter that the United States had no concerns that its grant money had been misused and did not see any grounds for the investigation of AntAC. Solomon portrayed Kent’s letter as the US embassy meddling in Ukrainian law enforcement matters, but Kent dismissed this view in closed-door testimony last month. “The accusations were completely without merit,” Kent said, adding that his critics in the Ukrainian prosecutor’s office “fundamentally misunderstood how our assistance is administered.”

The probe into AntAC was later dropped due to a lack of evidence. More importantly, the central conceit of the story—that Yovanovitch instructed Lutsenko not to prosecute various individuals—was retracted. Lutsenko eventually acknowledged to a Ukrainian news outlet that she never gave him a list of names.

On Tuesday, Kurt Volker, who until recently was the Trump administration’s special representative for Ukraine negotiations, testified that he told Giuliani in July that Lutsenko “was not credible and was acting in a self-serving capacity.” According to Volker, Giuliani replied that “he had already come to the same conclusion.” Lutsenko’s claims have nevertheless taken on a life of their own and are frequently invoked in the right-wing media as an example of Soros’ influence over the State Department and intelligence agencies.

In public, Giuliani would go on to embellish the tale further, suggesting in late September on several news shows that Soros somehow masterminded the federal investigation into Manafort’s illicit lobbying for a pro-Russian political party in Ukraine. Manafort was convicted in August 2018 of tax and bank fraud related to this lobbying and sentenced to more than seven years in prison.

In his media appearances, Giuliani has described AntAC as “Soros’ NGO” and falsely claimed it “developed all of the dirty information that ended up being a false document that was created in order to incriminate Manafort.” The document Giuliani seems to be referencing is the so-called “black ledger,” which listed secret payments to Manafort for off-the-books consulting work related to Ukraine. But AntAC did not produce that information and wasn’t responsible for publicizing the document. Artem Sytnyk, director of the National Anticorruption Bureau of Ukraine, and Serhiy Leshchenko, a former member of the Ukrainian parliament, first disclosed the information, parts of which have since been verified by the Associated Press and other outlets. “My desire to expose Manafort’s doings was motivated by the desire for justice,” Leshchenko wrote in a September op-ed in the Washington Post. “Neither Hillary Clinton, nor Joe Biden, nor John Podesta, nor George Soros asked me to publish the information from the black ledger.”

In September, as Giuliani was promoting the baseless view that Soros was steering a plot to bring down Trump, Soros’ camp issued a denial. “Short answer is no, Soros was not somehow involved in cooking up charges against Trump in Ukraine,” spokesperson Michael Vachon told the Daily Beast.

The implication, moreover, that AntAC is simply a tool for Soros to accrue power or wage political war on Trump is absurd. Soros was far from AntAC’s only donor. According to Daria Kaleniuk, the group’s cofounder, it has also received funding from the European Union, the United Kingdom, the Netherlands, and more than 500 Ukrainians, among others.

Ukraine, of course, is not the only country where Soros has engaged in philanthropy. For decades, he has sponsored anti-corruption efforts across Central and Eastern Europe, including in his homeland of Hungary and in Russia, before his foundation was banned there in 2015. Soros’ Ukraine work is “consistent with work he’s done elsewhere in the region,” Emily Tamkin, a freelance reporter who is writing a book about Soros, told me.

Soros’ name has become so toxic in Republican circles that lobbyists—representing clients from Guatemala, Albania, and other countries—have taken to linking US diplomats they dislike to Soros. The Daily Beast reported last week that the attacks are “tailor-made to Trump’s idiosyncratic sensibilities.” Fiona Hill, formerly a senior official on Trump’s National Security Council, was accused by conspiracy theorist Alex Jones and longtime Trump adviser Roger Stone of being a “Soros mole.” During her public testimony on Thursday, Hill called the anti-Soros conspiracy theories an “absolute outrage” and compared them to the notorious, anti-Semitic propaganda known as the Protocols of the Elders of Zion.

Asked whether attacks on Lt. Col. Vindman had a "tinge of anti-Semitism," Fiona Hill says, "Certainly when they involve George Soros."

"The trope against Mr. Soros was also created for political purpose. This is the new 'Protocols of the Elders of Zion.'" https://t.co/3BHb2I9OBT pic.twitter.com/W9GxfX1Xce

Tamkin told me that for decades, critics have impugned Soros’ efforts to promote democracy in Europe, but that these more recent criticisms have entered the realm of “deeply anti-Semtic make-believe.”

“He has funded work throughout the world. He does know different world leaders. All of that is true,” she said. “That’s different from him running the State Department, which is he is not doing.”