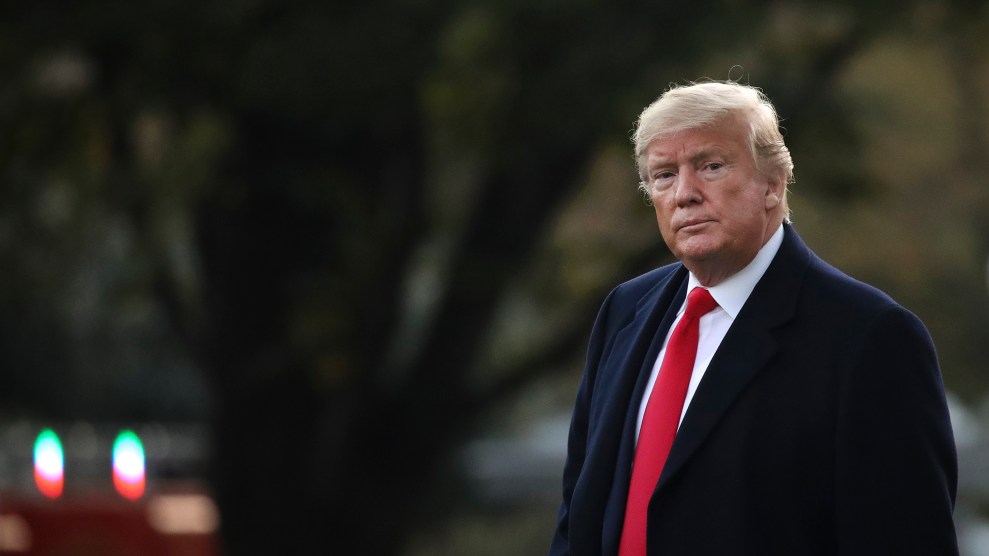 Trump’s recent and unexpected trip to Walter Reed Hospital just outside of Washington, D.C. kicked off a new round of online misinformation that, despite not catching much traction in America, has gone viral in Brazil, ending up on the Twitter feed of Eduardo Bolsonaro, a son of Brazilian President Jair Bolsonaro.

A high-profile government official making an unexplained, surprise trip to a hospital is the exact kind of health scare that conspiracy theorists feed on. When in 2016 presidential candidate Hillary Clinton appeared unsteady on her feet while on the campaign trail some two months before Election Day, it immediately became the subject of ludicrous speculation and misinformation among right-winger hoaxers about her health.

The episode underscores how political hoaxes too outlandish to land in America can be exported.

Trump’s trip to Walter Reed also set off conspiracies, but not about his health ailing: Instead, right-wing conspiracy theorists declare Trump’s health was fine, but baselessly claimed that a food taster who makes sure his meals aren’t tampered with had been poisoned. According to them, the real reason Trump went to the hospital was to make sure he had not also eaten any of the poisoned food.

Infowars published the first story making the claim on Monday, citing an “inside source.” Despite having disparaged the use of unnamed sources in the past, far-right troll and former Infowars editor-at-large Paul Joseph Watson tweeted the story shortly after it was published, where it garnered almost three thousand likes and one and a half thousand retweets.

“Um, I am speechless with this,” White House Press Secretary Stephanie Grisham wrote in an email to Mother Jones seeking comment on the theory. “No—this is not true. I put out two statements Saturday, Dr. Conley released a memo yesterday, and the President himself addressed this today.”

Despite the White House’s disavowal, hyperpartisan, right-wing click farm sites began posting their own versions of Infowars’ story, often citing the original. While some were moderately shared around social media, the story took finally gained real momentum on Monday when the Brazilian far-right picked up on it. Several prominent Brazilian Twitter accounts reposted the Infowars story including a pro-Bolsonaro blogger, Eduardo Küster, whose tweet about the hoax garnered almost 17 thousand likes and over four thousand retweets, making it the most popular tweet about the story according to analytics from the CrowdTangle app.

Küster’s tweet appears to be how Eduardo Bolsonaro, the son of Brazil’s far-right president, noticed the hoax. At some point on Tuesday morning, Bolsonaro retweeted Küster’s tweet about the poisoning hoax to his 1.8 million followers, ensuring that it entered the mainstream in Brazil.

Brazilian right-wing politician Bia Kicis also blasted the story to her nearly half a million Facebook followers on Tuesday, garnering over 1,000 likes and hundreds of shares. Several other pro-Bolsonaro pages also shared the story to their collective hundreds of thousands of followers. Kicis shared an image spreading the hoax on Instagram to her over 200 thousand followers. At least one other right-wing Brazilian meme account that has over 77 thousand followers also shared the image. A few smaller Portuguese language outlets in Brazil also ran with Infowars’ reporting, reposting versions of the story.

Google searches for Trump poisoning (“Trump envenenamento” in Portuguese) spiked to all-time highs in Brazil, according to Google Trends. Searches for the term peaked within several hours of Küster’s tweet.

The episode underscores how when political hoaxes are even too outlandish to land in America, they can be exported to other countries that are less familiar with American politics or media. Fabio Zanini, editor at large at Folha de Sao Paulo, Brazil’s largest newspaper, said that Infowars being an American site may have helped it become a vector to spread misinformation in the country.

While major American media outlets have credibility in Brazil, the vast majority of people likely have no idea what Infowars is, Zanini explained. “Brazilians tend to have an admiration for the United States, they may think ‘Oh, if it’s on an American website it must be good.’”

This isn’t the first time Paul Joseph Watson has likely been a node connecting the American far-right and the Brazilian far-right. In June, Watson tweeted out an out of context clip about the Hasan Piker, a journalist and commentator for the Young Turks which falsely made him seem like a misogynist. It was eventually tweeted by Bolsonaro’s son.

Zanini said that Brazil’s far-right has been trying to make inroads with and model itself after the American right. Eduardo Bolsonaro, for example, has cultivated a relationship with Steve Bannon. Bolsonaro, Küster, and others also regularly peddle misinformation as a political tactic. If they’re ever called out on it, Zanini said, they give a light apology, or like the American far-right, claim it was a joke and keep moving.

“They use misinformation and fake news quite often and they just don’t care about it,” Zanini said.