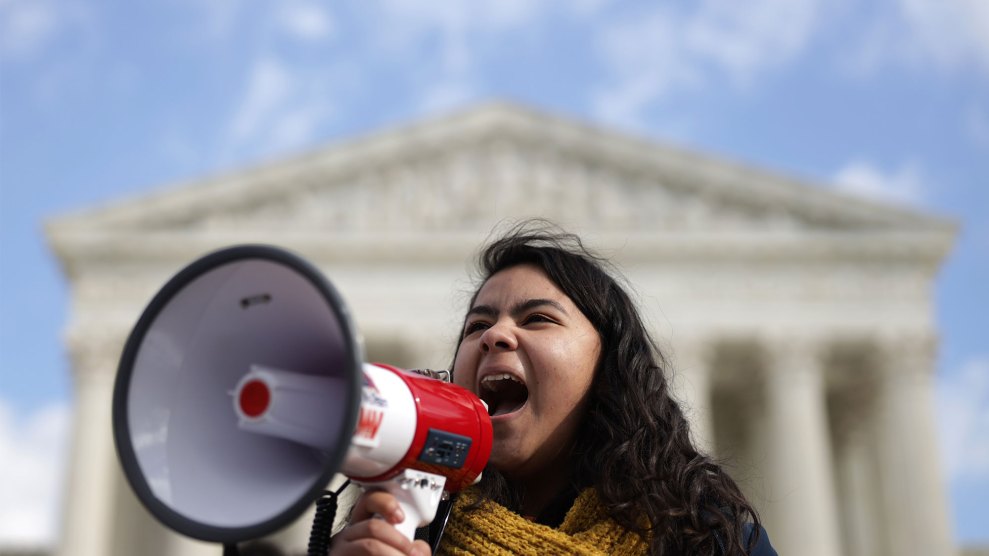 Georgetown student Anahi Figueroa-Flores, a DACA recipient, speaks during a rally Friday in front of the Supreme Court. Students at area high schools and universities had staged a walkout.Alex Wong/Getty Images

President Donald Trump’s decision to cancel the Deferred Action for Childhood Arrivals program arrives in the Supreme Court on Tuesday, trailed by the anger of the program’s supporters. Just today, a group of demonstrators arrived in DC after marching from New York City. Thousands more people across the United States are expected to take to the streets on Tuesday, when the court hears a suite of cases challenging whether the Trump administration acted in an “arbitrary and capricious” manner in canceling the program that shields more than 700,000 young people from deportation.

The Home Is Here marchers, among them one of the plaintiffs in the case, left New York City on Oct. 26 and arrived Sunday morning in DC, chanting and dancing. Supporters from California and other parts of the country also traveled to the nation’s capital, and earlier this week students walked out in support DACA. There’s a national call for students to walk out of school on Tuesday.

WE HAVE ARRIVED AT THE SUPREME COURT!

230 miles, and we have made it all the way to defend our community! #HomeIsHere pic.twitter.com/OhdW1smKUY

Today we waved goodbye to a strong delegation of #DACAmented leaders who will represent California at the Supreme Court on November 12.#DACA, California has your back! ✊🏽 pic.twitter.com/fYthS6eHtM

Here’s a DACA refresher ahead of the hearing:

On June 15, 2012 after months of pressure from immigration rights groups and in the midst of a heated re-election campaign, President Barack Obama signed an executive order that gave birth to DACA. The program allowed those who at the time were between the ages of 16 and 31, who were brought here as children, and who didn’t otherwise have immigration status, to apply for a two-year work permit that also protected them from deportation. They also had to meet a series of requirements and have no criminal record. Thousands received DACA in the coming years—they’re known popularly as Dreamers, a callback to the failed DREAM Act that offered similar but broader protections—although many struggled with the decision to apply in the first place because it was only a temporary status.

On the campaign trail in 2016 Trump threatened to end DACA, calling it an overreach by the Obama administration. Immediately after Trump’s election, DACA recipients felt scared and confused by their uncertain future. They were particularly vulnerable to deportation in the event that Trump took away their status; the government already had all of their information. Many were also afraid for their undocumented family members, who were now also exposed.

In office, Trump turned the rhetoric down a bit, saying said he would treat DACA recipients “with heart” and work with Congress on the matter. But in September 2017, the Trump administration announced it would cancel DACA. Courts quickly ruled that the administration did not have the authority to end DACA so abruptly and without adequate explanation, and the government was compelled to renew the program for those who had already been granted temporary protected status.

Since then lower courts have ruled against the Trump administration, saying his move was “arbitrary and capricious.” It’s been two years of limbo for DACA recipients.

Tuesday morning the Supreme Court will hear arguments on whether the Department of Homeland Security’s decision to wind down DACA is lawful and judicially reviewable. The court is not expected to make a decision until the spring.