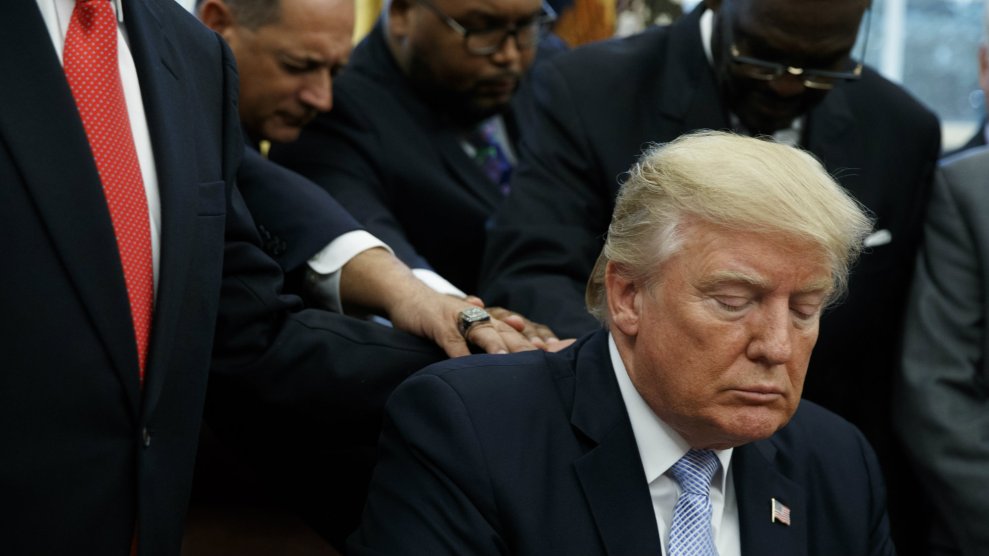 President Donald Trump made history this week when the House voted to impeach him on charges of abuse of power and obstruction of Congress, making him the third president in US history to be impeached. The president still has fervent support from Republicans and high-profile conservatives, but this week he has taken a hit from an unexpected place.

White evangelicals have always been Trump’s most unwavering allies and voting base, but the impeachment question may have begun to splinter even that group. An October Public Religion Research Institute found that 99 percent of white evangelicals opposed impeachment. (In contrast to the 86 percent of Black Protestants who disapprove of the president.) But on Thursday, Christianity Today, a leading religious magazine published an editorial that called for the removal of Trump from office, a surprising position for a magazine that was founded in 1956 by the late Billy Graham, one of the most influential and conservative evangelical leaders in modern history.

“The president of the United States attempted to use his political power to coerce a foreign leader to harass and discredit one of the president’s political opponents,” Editor-in-Chief Mark Galli wrote. “That is not only a violation of the Constitution; more importantly, it is profoundly immoral.” Galli also offered a stern warning to evangelicals still supporting Trump: “To the many evangelicals who continue to support Mr. Trump in spite of his blackened moral record, we might say this: Remember who you are and whom you serve.”

Trump immediately responded with a pair of tweets, first challenging the publication’s politics, then reminding its readers how much he has done for the evangelical community.

….have a Radical Left nonbeliever, who wants to take your religion & your guns, than Donald Trump as your President. No President has done more for the Evangelical community, and it’s not even close. You’ll not get anything from those Dems on stage. I won’t be reading ET again!

Indeed, Trump has delivered on many of the issues most important to evangelical voters. He’s appointed a record number of conservative federal judges and two conservative Supreme Court justices, who in turn have signaled they are willing to curtail abortion rights. Plus, he has championed religious liberty and moved the US embassy to Jerusalem.

Evangelist and Christian missionary Franklin Graham, the son of Billy Graham, who died in 2018, has been one of Trump’s closest religious advisers and biggest fans. He said that his father would have been “disappointed” by the op-ed. “My father knew Donald Trump, believed in Donald Trump, and in this last election, he voted for Donald Trump,” he told Fox News.

Less than 20% of evangelicals supported @HillaryClinton in 2016 but now @CTmagazine has removed any doubt that they are part of the same 17% or so of liberal evangelicals who have preached social gospel for decades! CT unmasked! https://t.co/O7WjyZSwiW

Joining the chorus—even though Trump’s support among Black evangelicals is slim—are a number of high-profile Black pastors who support the president. For example, Darrell Scott, an Ohio pastor who has been a Trump supporter since the time when the president was a mere New York real estate developer raising questions about the authenticity of then President Barack Obama’s birth certificate, voiced his concerns. Scott founded and is currently CEO of the National Diversity Coalition for Trump. He dutifully echoed the president’s sentiments when responding to the op-ed.

The Editor of “Christianity Today” only speaks for himself! Oh…and liberals.

Mark Burns, a South Carolina pastor also joined in the Secret Liberal Plot narrative. Burns served as a campaign surrogate in 2016—even though he admitted to voting for Barack Obama in 2008.

Libs have infiltrated some elements of Evangelicals, which Christian Today, a Magazine founded by Billy Graham clearly showed with the request for Trump's removal from office. But I agree with Franklin Graham, when he said his father would be embarrassed by Christianity Today.

Trump’s outrage about the editorial continued well into Friday, when he was able to conflate his ire with Democrats and Democratic candidates hoping to replace him, with his rage at a religious publication for supporting impeachment:

I guess the magazine, “Christianity Today,” is looking for Elizabeth Warren, Bernie Sanders, or those of the socialist/communist bent, to guard their religion. How about Sleepy Joe? The fact is, no President has ever done what I have done for Evangelicals, or religion itself!

The op-ed attracted so much attention that the site temporarily crashed. But before liberals begin singing Christianity Today’s praises in the streets, they should consider Reverend William Barber’s words. “It’s not enough to just criticize the man,” the minister and political activist said in a statement. “We must challenge the distorted moral narrative and the immoral policy agenda that gave rise to Donald Trump in the first place.”