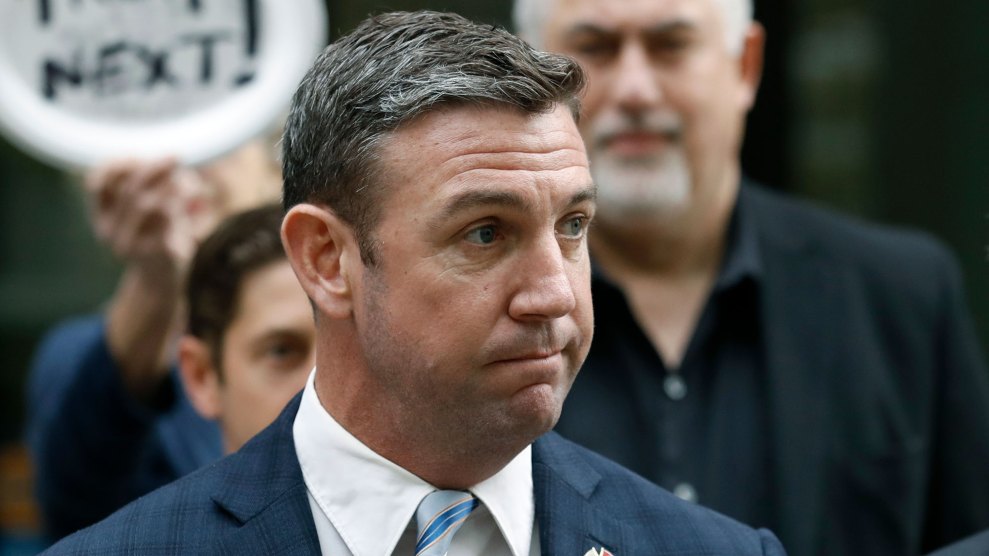 After claiming for a year that he was the victim of a political “witch hunt” by federal prosecutors as part of a “deep state” conspiracy, disgraced Rep. Duncan Hunter (R-Calif.) pleaded guilty Tuesday to one count of misusing campaign funds for extramarital affairs with lobbyists and congressional aides, family vacations, his children’s private school tuition, and other expenses.

Hunter, who changed his plea from not guilty, faces up to five years in prison and is expected to leave Congress, marking an end to a family dynasty that has held a San Diego congressional seat for nearly four decades.

In an interview with a local TV station on Monday, Hunter, a fervent defender of President Donald Trump, said he had “made mistakes and failed to properly monitor and account” for his campaign expenses and would serve prison time. Despite being indicted on 60 criminal charges in August 2018, Hunter won reelection last November. “Whatever my time in custody is, I will take that hit,” he told San Diego TV station KUSI. “My only hope is that the judge does not sentence my wife to jail. I think my kids need a mom in the home.”

Federal prosecutors alleged that the Hunters “illegally converted and stole more than $250,000 in campaign funds” for a host of goods and services for mistresses, themselves, and their children. In court on Tuesday, Hunter confessed to knowingly using campaign funds for personal use from “no later than 2010,” less than a year after he took office, and through at least 2016, according to the San Diego Union-Tribune. He and his wife and campaign manager, Margaret Hunter, agreed to misuse campaign funds, according to the plea agreement seen by the Union-Tribune. In June, Hunter’s wife pleaded guilty to one count of conspiracy and struck a plea deal with prosecutors, raising the likelihood that she would testify against him when the campaign finance case was set to go to trial in January.

Hunter will be sentenced on March 17. His expected departure from Congress opens the race for his seat to a crowded field in a Republican-heavy district in San Diego, including former Republican Rep. Darrell Issa and Democratic contender Ammar Campa-Najjar, who lost to Hunter in 2018.