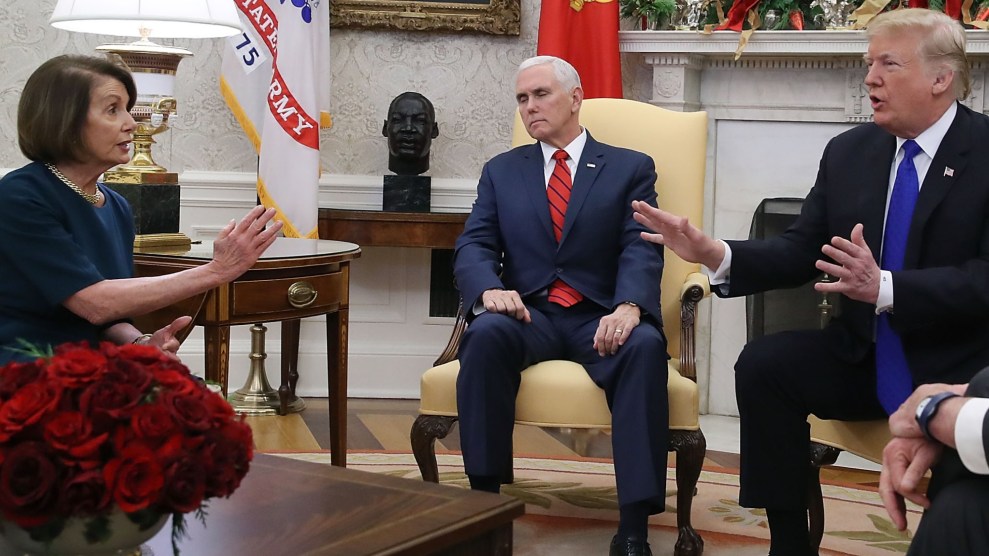 Five months ago, progressives stacked the annual defense policy bill with dozens of provisions sure to make any hawkish Republican queasy. Win Without War, a liberal anti-war group, praised the “big progressive victories” in the bill and lawmakers roundly proclaimed it the “most progressive” defense bill in history. But the legislation set to reach President Trump’s desk this month is a far cry from the one progressives dreamed of getting when a Democratic majority took control of the House this year.

In July, the House passed a National Defense Authorization Act that included a host of provisions progressives had long pushed for. That bill would have blocked Trump from using the Pentagon’s money to build a border wall, ended American support for Saudi Arabia’s war in Yemen, and required the White House to seek congressional approval before attacking Iran. But after negotiators from the House convened in conference with their counterparts from the Senate, not a single one of these proposals made it to the final bill, which was released on Monday and is set to be voted on this week. The only big item from the progressives’ agenda that Democrats did secure was a commitment to grant federal employees 12 weeks of paid parental leave, but that came in exchange for approval to create Trump’s Space Force, which would become the sixth branch of the Armed Services.

It didn’t take long for outside advocacy groups to register their disapproval. “The results of negotiations for the final text of the NDAA are disastrous,” read a statement released by 31 progressive national security, environmental, and civil rights groups. “The FY2020 NDAA conference report has been so severely stripped of vital House-passed provisions essential to keeping the current administration in check that it no longer represents a compromise, but a near complete capitulation.”

“The results of negotiations for the final text of the NDAA are disastrous.”

Most major progressive groups found something to dislike about the bill. LGBTQ rights advocates said they were “profoundly disappointed” negotiators erased an amendment from the House version that would have reversed Trump’s ban on transgender troops. Sonya Lunder, senior toxics adviser at the Sierra Club, said “this legislation dropped important measures to stop the poisoning of American communities” by not severely restricting the release of certain harmful chemicals known as PFAS. Rep. Ro Khanna (D-Calif.) and Sen. Bernie Sanders (I-Vt.), who are among the sharpest critics in Congress of interventionist foreign policy, released a blistering statement that assailed the bill’s “astonishing moral cowardice.” Even Mark Ruffalo hates it!

As harsh as the blowback to the compromise bill has been, the process has unfolded in precisely the way House progressives expected. When Democrats passed their version of the NDAA in July, zero Republicans voted for it. (That’s extremely unusual for the NDAA, which has historically cleared both chambers of Congress with strong bipartisan majorities, no matter which party controlled each chamber.) In lieu of Republican votes, progressives extracted concessions from every corner of Trump’s national security policy—including, crucially, limits on Trump’s ability to fund his beloved border wall with Pentagon funding. Those provisions were never going to win approval from Senate Republicans.

A senior aide to House progressives expects 60 or 70 liberal members to vote against the compromise measure on the floor. That probably won’t give them enough votes to block final passage, as a number of House Republicans are likely to switch their votes now that the compromise package is out and prominent progressives have become more vocal in criticizing the bill.

The Pentagon’s budget has been too large for too long. I cannot support a defense bill that’s a $738 billion Christmas present to giant defense contractors & undermines our values and security.

CPC co-chair Pramila Jayapal is voting against the NDAA, but she credited Adam Smith (whose district is next to hers) for his outreach to progressives.

"He was great, and I told him that….At the end of the day, this is a very tough vote for most progressives."

Despite their disapproval, the NDAA isn’t a total loss for the Democrats’ liberal faction. The $738 billion defense policy bill will increase the defense budget by $22 billion from last year, but stays closer to the figure that House Democrats approved earlier this summer ($733 billion) than the $750 billion requested by the GOP-held Senate. (Neither figure comes close to the $664 billion progressives initially proposed in April). The new bill ensures full benefits for the spouses of slain service members by eliminating the provision more commonly known as the “widows tax.” It also prevent the United States from buying missiles that are not compliant with the Intermediate-Range Nuclear Force Treaty, a Reagan-era agreement with Russia that limited the types of weapons the countries could accrue. Trump pulled the US out of the INF in August, so this counts as a minor victory for arms control advocates. “Democrats spent four long months in hard-fought conference negotiations advocating fiercely for each and every progressive priority in the bill,” a Democratic aide close to the negotiations said. “Ultimately, for every progressive policy not included in the conference report, the blame rests with the Republican Senate and White House who refused to budge on these issues.”

House Armed Services Committee Chair Adam Smith (D-Wash.) said the compromise NDAA was “the most progressive defense bill in the history of the country” during a Capitol Hill press conference Tuesday. But back in July, when the initial NDAA bill was voted on by the House, Republicans were equally likely to lambaste the bill on those terms, in effect affirming Smith’s characterization. (Rep. Liz Cheney (R-WY), the No. 3 Republican in the House, called it “absolutely shameful.”) This time around, the circumstances are different. Smith’s Republican counterpart on the Senate Armed Services panel, James Inhofe (R-Okla.) showed off a list of rejected Democratic proposals at the Republican caucus lunch with a fact sheet titled “Progressive Agenda Halted.” White House Press Secretary Stephanie Grisham said in a statement that the compromise bill advances Trump’s priorities and rejects “progressive attempts to limit the President’s authorities as Commander in Chief.” Up can’t also be down.

In comments to Politico this week, Smith was frank about the difficulty of squaring the progressive planks of the House’s original bill with Inhofe and Trump’s objections. Adding amendments “not within our jurisdiction” that won’t pass muster with Senate Republicans or Trump are “going to kill my entire bill,” he said.

His bill isn’t dead, at least not this year. But he now has to turn to the same Republicans who assailed it only months ago in order to get it passed over objections from progressives.