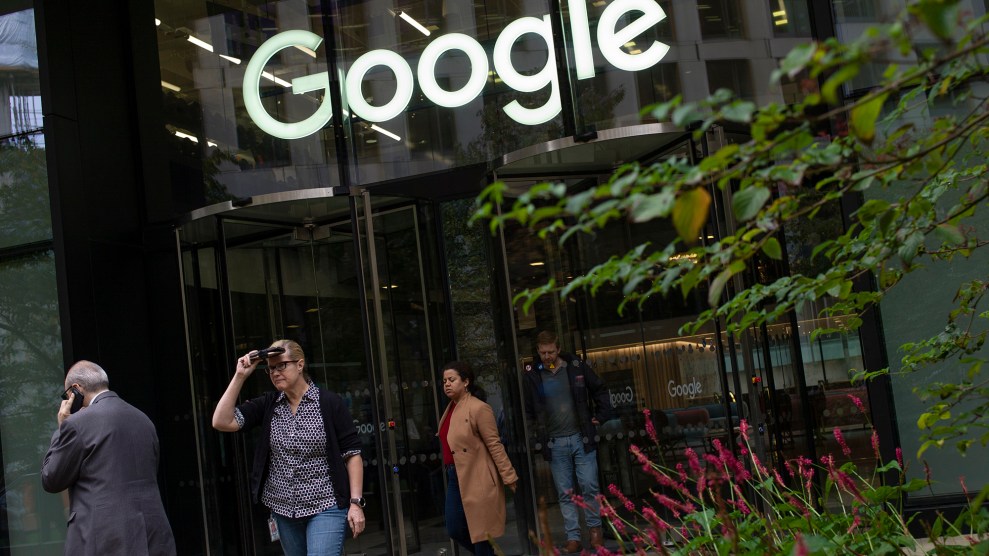 Google employees walkout of company offices in London last year as a part of a global company protest against how it handled internal sexual harassment cases.

A Google employee says she was fired for supporting union-organizing efforts, just one week after a federal investigation into union-busting at the company was publicly confirmed.

The former employee, Kathryn Spiers, wrote in a blog post published on Tuesday morning that she had been fired on Friday for creating an internal pop-up notification that let her fellow employees know about their union organizing rights when visiting the website of IRI Consultants, a company contracted by Google to help its anti-union push.

Spiers is also filing an unfair labor practice claim with the National Labor Relations Board, alleging that her firing was an “attempt to quell Spiers and other employees from asserting their right to engage in concerted protected activities.”

“They wouldn’t let me consult with anyone, including a lawyer.”

“Google’s actions are the antithesis of the freedoms and transparency it publicly touts and violates Ms. Spiers’ and other Google employees’ rights to engage in concerted activity protected under the National Labor Relations Act,” reads a draft of the claim provided to Mother Jones.

Spiers’ pop-up notification was powered with a few lines of code, and simply read: “Googlers have the right to participate in protected concerted activities.”

“This kind of code change happens all the time. We frequently add things to make our jobs easier or even to just share hobbies or interests,” Spiers wrote. “For example, someone changed the default desktop wallpaper during the walkout last year so that the Linux penguin was holding a protest sign. The company has never reacted aggressively in response to a notification such as this in the past.”

Spiers alleges that the process prior to her being fired included an “extremely aggressive and illegal” interrogation by Google.

“They wouldn’t let me consult with anyone, including a lawyer, and relentlessly pressured me to incriminate myself and any coworkers I had talked to about exercising my rights at work,” Spiers wrote.

Spiers told Mother Jones that during parts of the investigation Google denied her requests to have an attorney present, despite Google’s own staff attorney being there. (A Google spokesperson said that they were not familiar with the details of Spiers’s exit interviews.)

Spiers believes her firing is part of Google’s alleged broader anti-union agenda. At the end of November, the company fired four workers over what it said was data security violations. The workers claimed they were actually dismissed for working to organize a union.

“With these firings, Google is ramping up its illegal retaliation,” workers wrote in a statement at the time. “This is classic union-busting dressed up in tech industry jargon, and we won’t stand for it.”

Bloomberg reported that the company has created a tool to flags large employee gatherings organized on internal calendars, which many believe is an attempt to crackdown on organizing.

The New York Times reported in November that Google had hired IRI Consultants, a firm with a history of working to quell unionization efforts. The company’s move followed an uptick in worker activism after employees spoke out about the company’s Department of Defense contracts and protested its handling of sexual harassment allegations lodged against several male executives.

Spiers, who is a trans woman, also said that she believes Google is targeting its queer employees.

“It is incredibly bizarre that three of us have been trans-women and four of us LGBTQ,” Spiers said of the now five employees, who, after being fired by Google, have said they were targeted over union organizing efforts. “I think Google was targeting more vulnerable members of the community.”

Google has maintained that none of the firings are related to union-busting, nor are the result of any bias against LGBTQ employees. At the time of the four employees’ firings, the company said their dismissals were in reaction to “searching for, accessing, and distributing business information outside the scope of their jobs.”

While a Google spokesperson acknowledged in an emailed statement that the company had “dismissed an employee who abused privileged access to modify an internal security tool,” describing it as a “a serious violation,” the company declined to confirm Spiers’ involvement.

A spokesperson explained that employee had been fired for violating policies regarding internal pop-ups that bar engineers from creating notifications for anything that isn’t related to security, privacy, or without a “business justification.”

Spiers said that she wasn’t familiar with any such specific rules, and that Google had not laid out where its policies say this.

Spiers has engaged in other protest efforts and was involved in creating an internal Chrome extension, first reported by Bloomberg, that emailed Google’s top lawyer every time a user opened a Google document. That code was created in protest of what programmers saw as Walker changing Google’s open, transparent culture.

While Google has denied engaging in union-busting, the National Labor Relations Board has launched an investigation into November’s terminations.

“Since they hired union-busting firm IRI, they’ve got a lot more aggressive. They feel like they can steamroll us and that they might get away with it if they do it fast enough,” Spiers said.