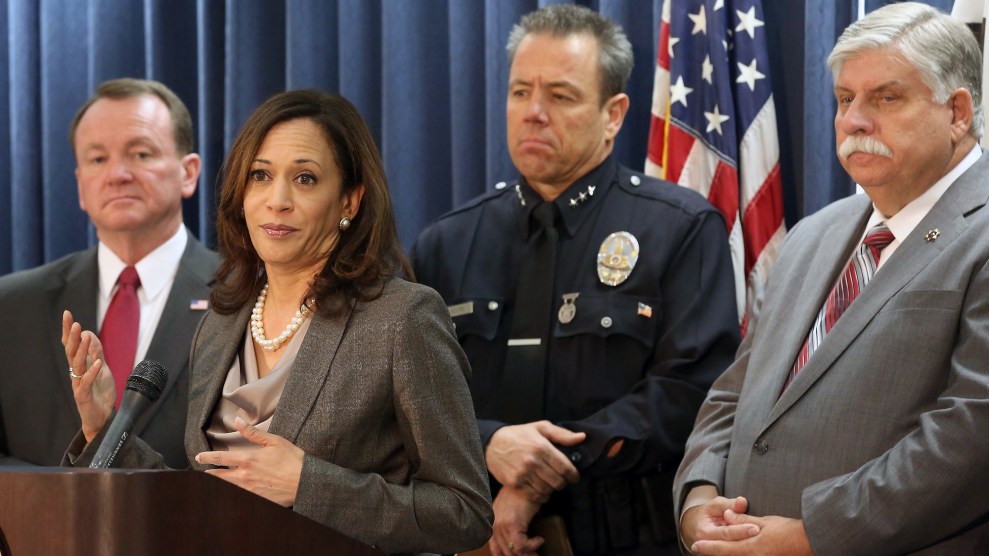 In a roundtable discussion hosted by Blavity in October, Sen. Kamala Harris briefly addressed the meme that had beset her presidential campaign. “I’m fully aware of that whole meme about ‘Kamala is a cop,’” she said, an aggrieved note creeping into her tone, “and there are strategic reasons people are doing that.” The meme, she suggested, was a part of a calculated effort to turn a strength—her record as a prosecutor—into a weakness.

This was the line taken by many of her eulogists in the wake of her decision last week to suspend her campaign. Amanda Marcotte at Salon blamed leftist “bro” types for truly weaponizing the meme:

It’s fine, of course, if people look at Harris’ history and feel like they would prefer another candidate…But that wasn’t what was happening with the “Kamala is a cop” meme. Instead, that was about wiping out a nuanced discussion of her history in favor of a gross generalization. More to the point, in practice it was mostly about a bunch of douchey white guys appropriating very real concerns — that had primarily been raised by communities of color — as an excuse for dunking endlessly on the first black woman to run for president who seemed to have a real shot at winning.

Don’t give the “douchey white guys” too much credit. No doubt there were racist and sexist opportunists using the “Kamala is a cop” meme as a cudgel. But the reason it was there to be picked up in the first place is because Black communities, in particular Black women, had done the work of radically re-evaluating Harris’ record and rhetoric on criminal justice.

On Black Twitter, calling out aspects of Harris’s record as a prosecutor wasn’t just about getting one over on a candidate. It was about holding her accountable for her past actions, which include an anti-truancy law that threatened the parents of students who skipped school with criminal charges, and various failures to hold police and prosecutors accountable for misconduct. For a long time a gross generalization had prevailed—that Harris had done commendable, hard-edged work as a prosecutor, and that this record would position her well in national politics. She’d even proudly declared herself California’s “top cop” in 2016 —two years after the Ferguson protests. Marcotte has things backward. In a climate where Democrats still felt they had to pander to the law-and-order crowd, “Kamala is a cop” was the nuance.

It isn’t (only) that Kamala was a top cop. It’s that *she called herself a top cop*.

Some voters registered the difference, even if they couldn’t articulate it.

For Marcotte, the “Kamala is a cop” meme was an example of a “toxic” internet culture run amok. But this view puts the minority of internet bullies ahead of the legitimate critics who helped move the consensus on law enforcement in America. “The current debates about criminal justice reform are, in large part, a product of the Black Lives Matter movement and organizing,” Keeanga-Yamahtta Taylor, author of #BlackLivesMatter to Black Liberation and assistant professor of African American Studies at Princeton University, wrote in an email. “Of course, there were steps or a pre-history to the Ferguson rebellion and the resultant BLM movement. Michelle Alexander’s book The New Jim Crow gave ordinary people language to describe the reality and the results on mass incarceration.”

The “Kamala is a cop” meme was born of generations of research and local activism demanding reforms to the criminal justice system—including a very different, often less aggressive role for prosecutors. This history dates back to the 1960s and ’70s, when activists like Angela Davis, Elaine Brown, and other members of the Black Panther Party first began calling for radical prison reform and questioning the idea that the existing criminal justice system made communities safer. There is a direct through-line between this work and that of modern groups like #BlackLivesMatter and Assata’s Daughters. In Chicago, the latter played a key role in ousting the former state’s attorney for Cook County, Anita Alvarez, after the killings of Rekiya Boyd and Laquan McDonald, two landmark cases that happened on her watch. The actions and rhetoric of these groups helped shift the broader cultural consensus about what the American criminal justice system should look like.

These legitimate critiques, not trolls hiding behind computer screens, gave the “Kamala is a cop” meme its power. Black Americans, who have wildly disproportionate contact with police and prisons, had cause to be wary of a presidential candidate, even a Black woman, who not only made her bones in the criminal justice system but adduced her work there to the case for her presidency. On Black Twitter, the meme was a reminder, not an explanation. Early on, Harris struggled to attract Black voters. Some were concerned about her electability, while others were truly mistrustful of her record and her promise to be the “progressive prosecutor” candidate.

Exclusive footage of Kamala Harris waving goodbye to the single black mothers she put on the bus headed to prison because they teen skipped school too many times pic.twitter.com/PQidQlW0h0

Frederick Joseph, writing for the Independent, saw the meme as part of a larger racist, sexist attack on Harris:

In an era where social justice and movements such as Black Lives Matter enjoy much-needed visibility, Harris’s opposition saw an opportunity to pounce. They criticised her record, her language and her connections with the establishment by spreading exaggerated and often false information about who she was and what she stood for. At one point, it even appeared that social media bots were maliciously spreading tweets claiming she wasn’t “black enough” and questioning her ethnicity.

Conflating the genuine criticism with the bad-faith attacks is itself a kind of disinformation, and in any case it begs the question of why “Kamala is a cop” was so effective to begin with. Her defenders say the meme failed to capture the complexity of her prosecutorial record, its progressive aspects, her opposition to capital punishment during her time as San Francisco district attorney, the fact that she emerged from an era during which Democrats had to talk like Spiro Agnew in order to get elected.

But this was the point: Harris’s record suggested she saw criminal justice less as a matter of human rights than as a set of politics to be negotiated—witness her defense as California attorney general, with reelection on the horizon, of the state’s right to execute people, or her flip-flop on marijuana legalization. The argument she made during the presidential campaign was that, relative to the larger context of American law enforcement, the outcomes of these negotiations were progressive.

“Kamala is a cop” dispensed with this sort of tortured calculation. There was no Pinocchio-rated fact-check to be done on the meme. It wasn’t a careful weighing of her record. It certainly wasn’t disinfo. It said only what Kamala herself had said, that she was a cop, the difference being that it operated from the new-forming consensus, achieved by the work of Black activists online and out in the world, that a cop was a bad thing to be.

Ashley Reese at Jezebel traced the meme’s growth in popularity among young voters skeptical of Harris’s message: “The meme merely took publicly accessible information and translated it into an easily disseminated catchphrase. ‘You voting for Kamala? No way, she’s a cop.'”

“I think Harris tried to present herself as a reformer and even as a progressive,” Taylor wrote in an email to Mother Jones. “It stood in such stark contrast to her actual record and political comportment that it made it appear as if she were another politician who said one thing while doing another.”

The “Kamala is a cop” meme, like any politically effective slogan, got at a more complicated truth: The Democratic Party’s romance with mass incarceration is over. Black activism ended it. Harris didn’t lose because the meme stuck. The meme stuck because Harris and her brand of criminal justice had already lost.