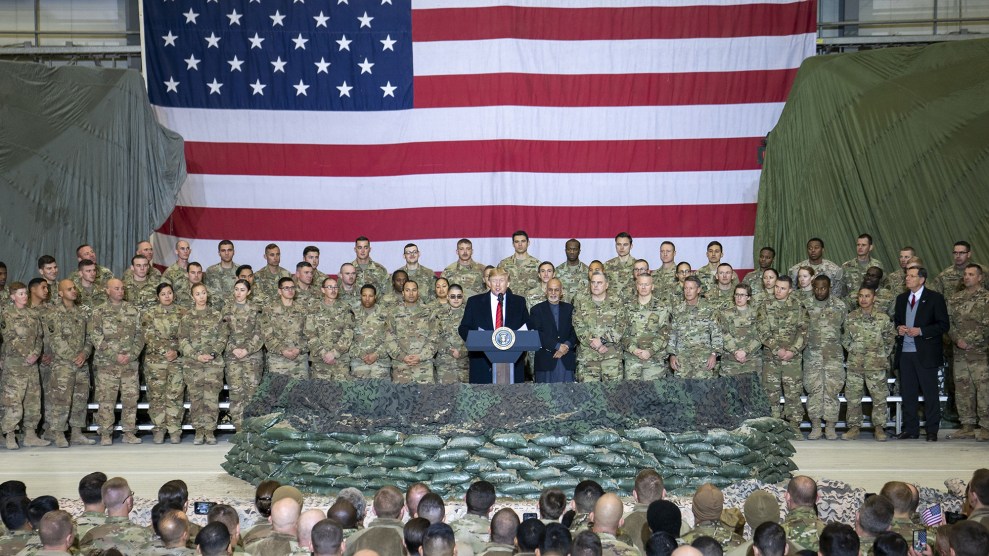 The National Guard has expelled two members for participating in a religious group with ties to white supremacists, the AP reported Friday. The incident highlights the US military’s struggles to prevent the armed services from increasingly becoming a training ground and bastion for white nationalists. Nonetheless, Congress watered down a measure to tackle the issue this month.

The removal of the two men, Dalton Woodward and Brandon Trent East who were in the Georgia and Alabama National Guards, respectively, was prompted by a report from the activist organization Atlanta Antifacists, which fingered the two as leaders of the Norse pagan group Ravensblood Kindred that has ties to white supremacists. East, whose case is still open, has 45 days to contest the findings that are the basis of his expulsion. The Georgia National Guard confirmed that Woodward is no longer a member. In 2017, East and Woodward attended a speech by white nationalist rabble-rouser Richard Spencer at Auburn University, where photos show the men carried signs reading “The existence of our people is not negotiable” and “We have a right to exist,” references to white genocide theories among white supremacists. After the talk, East recommended watching the speech on social media.

But he told the Atlanta Journal-Constitution this week that he is not racist. “I just went there because at the time I heard he was talking about the recent removal of Confederate monuments. That’s something I wanted to hear,” East said. “And it turned into a something a little worse obviously.” East’s social media presence, much of it deleted after being outed by the anti-fascist group, included memes popular among white supremacists, and his contacts included neo-Nazis and other extremists, according to the Journal-Constitution.

The military has long had ties to white supremacist groups. In the 1970s, a Defense Department directive allowed members to be part of the Ku Klux Klan, and some chose to flaunt their affiliation with the racist organization. The Pentagon did not ban such affiliations until the mid-1980s.

Today, while the Pentagon forbids military personnel to be involved “in criminal gangs and in other organizations that advocate supremacist, extremist, or criminal gang doctrine,” a disturbing number of recent reports suggest a strong white supremacist presence in each of the military branches. In February, a white nationalist Coast Guard lieutenant was arrested for allegedly stockpiling weapons to use in a terrorist attack. Last month, Vice News found three marines using a neo-Nazi online forum. The Huffington Post recently uncovered 11 service members with ties to Identity Evropa, a white nationalist group that helped plan the deadly “Unite The Rally” in Charlottesville, Virginia, in 2017. Shortly after Charlottesville, a poll of service members found that nearly 25 percent had encountered white nationalists among their fellow members.

This fall, the Democratic-controlled House of Representatives passed an amendment to the National Defense Authorization Act, the annual military funding bill, to encourage the military to screen enlistees for white nationalist ties and beliefs. But when the House version was reconciled with the version from the Senate, the language was changed to require the military to study screening techniques for “extremist and gang-related activity.”

The Southern Poverty Law Center, which tracks white nationalist extremists, has long been concerned that the military is a recruiting and training ground for extremists. Perpetrators of racial violence are often former service members, according to Heidi Beirich, who tracks hate groups at the Center. In November, 2020 Democratic presidential hopeful Sen. Elizabeth Warren (D-Mass.) became the only candidate to put forth a plan to fight white nationalism that included tackling the problem in the US military. “I’ll direct the Pentagon to tighten its background check process and to better track incidents of bias crimes and reports of affiliation with white nationalist or neo-Nazi groups in the ranks,” the plan on Warren’s campaign website states. “There is no room for white nationalism in the ranks of our armed forces.”