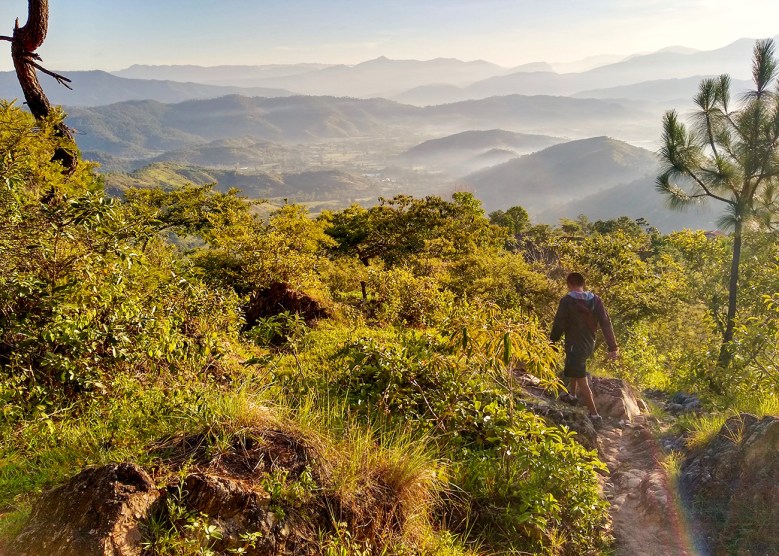 At 20 years old, Ricardo Caló left rural Guatemala for the United States, worked for three years, and came home. Two decades later, we met at his metal workshop in Cubulco, a small city five hours north of Guatemala City. Thanks to his time in Tennessee, he owned a home, kept his kids in school, and ran a welding business, a skill he learned by building Sonic Drive-Ins throughout the American South. It was the type of success story the United States has spent billions of dollars to prevent.

Under Democratic and Republican presidents, the US government has tried to deter unauthorized migration from Central American out of existence. At the same time, it’s made it impossible for nearly everyone in the region to come legally. More humanely, bipartisan coalitions have approved foreign aid designed to encourage Central Americans to remain at home. What unites both approaches is a vision of a world in which Guatemalans, Hondurans, and Salvadorans quickly stop coming to the United States.

There’s an alternative that’s rarely discussed: seeing Central Americans’ desire to work in the United States as a chance to help both sides’ economies. Rather than force people to spend billions of dollars on smuggling fees, the United States could offer visas that let them get on airplanes to and work here legally. As I reported in a story about how President Donald Trump’s border policies have trapped people in places like Cubulco, many of them simply want to do what Caló did: earn some money and then return home to a more comfortable life. And it’s a solution that’s made more politically palatable, in the face of concerns about long-term competition for US workers, by the fact that demographic shifts are already well underway that will see far fewer Central Americans seeking to leave home for the United States.

One of the most empirically rigorous proponents of this approach is Michael Clemens, an economist and the director of migration, displacement, and humanitarian policy at the Center for Global Development. Clemens came of age as unauthorized border crossings climbed to record highs in the 1980s. Every year, he recalls, the reaction in the United States was just, “How are we going to stop it?”

Rather than force people to spend billions of dollars on smuggling fees, the United States could offer visas that let them work here legally.

His research shows that much of that boom could have been predicted by one fact: The number of young people entering Mexico’s workforce peaked. There weren’t enough jobs, so they headed north. Washington’s response was to militarize the border, which led migrants to use deadly routes through the desert to avoid deportation. Princeton University sociologist Douglas Massey has estimated that the increase in border enforcement caused more than 5,100 deaths between 1986 and 2010.

Then, around the time of the Great Recession, there was another largely predictable shift: The era of mass migration from Mexico ended as the number of Mexicans joining the labor market declined. For the past decade, more Mexicans have been leaving the United States than coming to it. For Clemens, the US government’s decision to push an entire generation of Mexicans migrants into the hands of smugglers was a “vast historic opportunity, terribly bungled.” But Mexican migration “was still massively, massively beneficial for the US,” Clemens says. “There’s a whole generation of children who were taken care of, grandparents who were taken care of, buildings that were built, factories that were guarded at night, farms that could continue to exist only because of that Mexican migration.”

Like Mexico in the 1980s, the “Northern Triangle” countries of El Salvador, Guatemala, and Honduras are now moving past a demographic peak. For the first time in decades, El Salvador’s youth population is decreasing because of dramatically lower birthrates. In Honduras and Guatemala, the number of young people will grow at a far slower rate in the coming years. A visa program for the Northern Triangle would not need to “be some sort of carte blanche for unending migration,” Clemens says, adding, “Definitely, there’s an end point. That is the unequivocal lesson of the Mexican experience.”

Central America will send far fewer migrants to the United States than Mexico did. There are only about 33 million people in the three Northern Triangle countries, one-quarter the population of Mexico. Relative to their populations, there are already more immigrants from the Northern Triangle in the United States (3.5 million) than Mexican immigrants (11.2 million). Even if the scale of migration from the Northern Triangle ends up far outstripping Mexican migration, it would only mean a few million additional people settling in a nation of 330 million people, likely over the course of decades.

Unlike in the 1980s and 1990s, Mexican workers usually come to the United States legally these days. Clemens cites three major reasons: the reduced demographic pressure, stricter border enforcement, and legal channels for migration. The result is far fewer Mexicans willing to cross the border without authorization. Employers, including the Trump Organization, have responded by recruiting seasonal workers in record numbers. In 2017, the United States admitted nearly 500,000 seasonal workers from Mexico, compared to fewer than 10,000 from the Northern Triangle countries. The United States could easily change that by creating new visas specifically for Central Americans, or allocating more existing visas to them.

Rather than visas, progressives tend to focus on foreign aid. Clemens also considers Trump’s decision to cut off assistance to Central America “vacuous and nihilistic.” The problem is that the evidence for deterring migration through development assistance is “weak at best,” according to a review of existing studies he did with researcher Hannah Postel in 2018. They concluded “that aid would need to act in unprecedented ways, at much higher levels of funding, over generations” to greatly reduce migration. In many areas, economic growth will likely lead to more migration, since people often stay because they can’t afford to leave. (None of this means that the United States shouldn’t provide more aid: It can deliver clear benefits and after backing generations of brutal dictators, the United States arguably owes Central Americans far more than a few hundred million dollars.) So the US government can offer more visas, or it can push people into situations like the one Ricardo Caló found himself in two decades ago.

Sitting on the floor of his workshop, Caló said the most frightening part of getting to the United States was passing through Mexico, where he worried that he’d be killed by cartels. In the United States, the danger came in the desert. After crossing the Rio Grande, he spent five days—the last two without food and water—in the desert before making it out “drunk” with thirst and hunger. If he’d been caught and deported, his parents would likely have had to sell the family home to cover the smuggling fees he paid to a coyote. Instead, he wound up cooking burgers at a Sonic. When a contractor came to make repairs at his franchise, Caló told him he had construction experience and got a job building the drive-ins.

There are still far from enough jobs in Cubulco, even for people like Caló’s kids who are able to stay in school. Caló said his children want to go to the United States, but he feels it’s impossible. Smuggling fees are running as high as $13,000. More important, they might die.

He mentioned the recent news that Vilma Mendoza, a woman from a neighboring village had drowned in the Rio Grande while trying to return to the United States. She was 20 years old, the same age Caló had been when he crossed the border. Mendoza made it to the United States on July 4, only to be sent back under Remain in Mexico, a Trump administration program that has dumped roughly 60,000 people in Mexican border cities plagued by organized crime. The administration considers the policy one of its greatest successes.