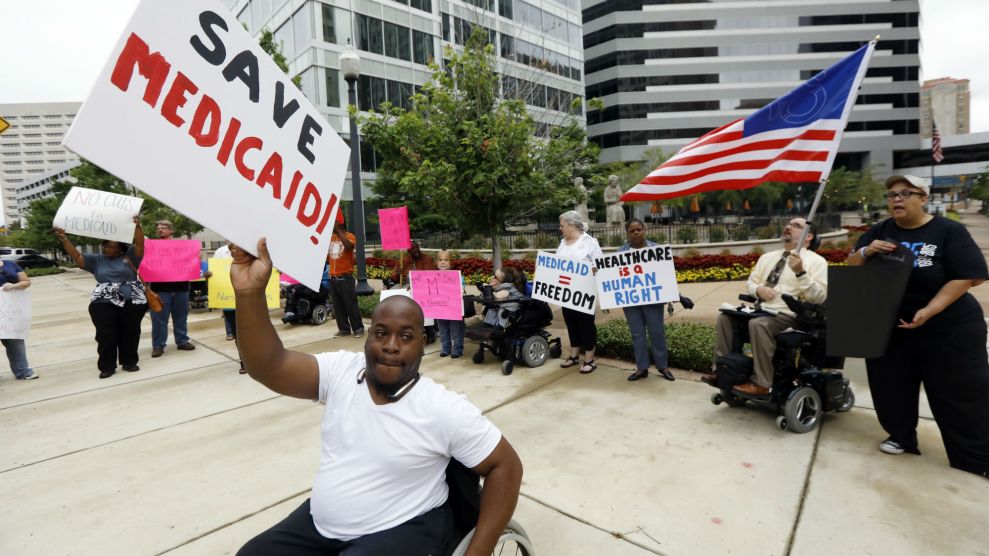 Mario Henderson leads chants of "save Medicaid" in a 2017 protest in Jackson, Mississippi.Rogelio V. Solis/AP

Children lost health coverage, pharmacies stopped filling prescriptions, and seniors were unable to access the care they needed due to problems at Maximus, a private company that administers public services like state Medicaid programs and food stamps, according to a new report from the Government Contractor Accountability Project.

“Problems at Maximus have at times directly impeded vulnerable Americans from accessing the health services that they desperately needed,” the report, released last month, says. “Maximus has also been implicated in performance failures that affect the security of health system information, health care provider payments, and stewardship of public dollars.”

Those conclusions jibe with the findings of a Mother Jones investigation, published earlier this year, that revealed Maximus earned at least $1.6 billion in government contracts for managing health care services in 28 states in the last decade. The company, which was founded in the 1970s, has faced its share of controversies:

Wisconsin was among the first states to contract with Maximus to run welfare-to-work programs in the 1990s, but the company was criticized for spending taxpayer money intended for the poor on marketing materials and workfare programs in other states. After Jason Turner, an architect of Wisconsin’s welfare overhaul, was hired by New York City Mayor Rudolph Giuliani, Maximus consultants met with New York City welfare officials months before new contracts were even put out for bid. Maximus was initially awarded $104 million out of nearly $500 million in welfare­-to-work contracts there. The city’s comptroller rejected the deal based on what he described as “corruption, favoritism, and cronyism.” (A court upheld the contract; Mayor Michael Bloomberg let it quietly expire.) And of course the biggest potential conflict is Seema Verma, the current head of the federal Centers for Medicare & Medicaid Services, who has long-standing ties to the company. During her confirmation hearings in 2017, her consulting firm still held a $10,000 contract with Maximus.

More recently, Maximus’ work for a $108 million Medicaid enrollment contract in Kansas came under fire because of interminable backlogs that prevented low-income residents from getting care. State officials said Maximus had intentionally lowballed the contract to win it. To make matters worse, assigning the contract to a private company had eroded the state’s capacity to perform the work itself. Without infrastructure to run enrollment for the entire state, Kansas officials agreed to bring the most difficult cases in-house—and to extend Maximus’ contract so it could do a better job with the rest. “In some cases,” Kansas Secretary of Health and Environment Jeff Andersen told the Wichita Eagle, “you get what you pay for.”

GCAP, a project of the Communications Workers of America and Change to Win, recommends that states exercise vigilance when awarding Medicaid contracts to private companies and enforce accountability after the contract has been awarded. It suggests contract monitoring to ensure compliance, including contract provisions to allow states to institute penalties when companies are not meeting obligations, and cooperating with oversight agencies to support audits.

Among the report’s findings:

Despite these issues, the company likely isn’t going anywhere. Given the Trump administration’s push to add work requirements to Medicaid, which would add layers of the bureaucracy and paperwork Maximus specializes in, the company’s profits could grow even bigger:

Maximus knows a market opportunity when it sees one. When the company held its quarterly conference call for investors last May, an analyst questioned whether a stronger economy would weaken the market for Maximus, since it deals in programs aimed at the poor. Not at all, said Bruce Caswell, who took over last April as CEO, a position whose last occupant earned $9.5 million a year. He added, “The movement to add work requirements—it’s a competency that no other company in the market has like Maximus.”