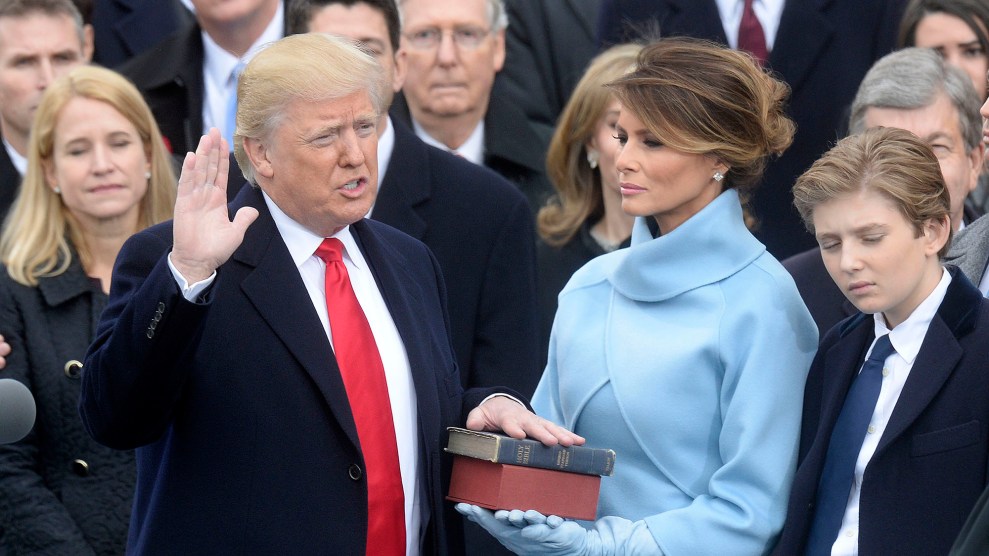 President Donald Trump takes the oath of office at his inauguration.Olivier Douliery/AP

The Justice Department on Tuesday announced it had indicted eight men for conspiring to illegally funnel $3.5 million to political committees supporting Hillary Clinton’s 2016 presidential bid. Prosecutors say the money came from George Nader—a businessman who was was recently charged with trafficking a child for sexual purposes. Nader was a key figure in the Trump-Russia scandal. According to special counsel Robert Mueller, he helped arrange meetings between Trump advisers and Russian emissaries. But this week’s indictment leaves a key question unanswered: Was Nader also the source of a $1 million donation from one of the defendants to Donald Trump’s inaugural committee?

According to the indictment, Nader conspired with Andy Khawaja, the CEO of an embattled online payment processing company, in a plot to provide massive campaign donations to Democratic groups. Khawaja allegedly made the contributions in his own name and through his wife and his company, and was then reimbursed by Nader. Six Khawaja associates were also charged with acting as straw donors as part of the scheme. It’s illegal to make political campaign donations in someone else’s name. Such charges are among the 53 counts in Tuesday’s indictment.

While arranging the payments to Democratic groups, Nader “reported to an official from a foreign government about his efforts to gain influence,” prosecutors said in a statement Tuesday. They didn’t name that government. According to the Mueller report, Nader “worked for the United Arab Emirates royal court” in 2016. The report described Nader’s efforts during the presidential transition period to help the UAE set up meetings between the Trump team and Russia.

In interviews and electronic messages prior to his indictment, Khawaja denied that Nader was his guest at the inauguration or an adviser to Allied Wallet. Any email suggesting this, he said, “is inaccurate. It’s bullshit. It’s fabricated.”

Tuesday’s indictment contradicted this denial, alleging that Nader had indeed attended the inauguration as Khawaja’s guest. Prosecutors also charged Khawaja with obstructing the investigation, in part by allegedly giving a witness false information in an attempt to downplay Nader’s ties to Allied Wallet.

The indictment, however, did not address an obvious question: Did Nader put up the $1 million that Allied Wallet gave Trump?

Khawaja says Nader had nothing to do with it. “Nader did not give me money for [the] inauguration,” he told Mother Jones Thursday. He also disputed the charges in the indictment. “Nader never gave me any money to give to [Hillary Clinton],” he said, asserting that Nader had instead simply done business with his company.

“Nader was a Trump supporter and never cared about Hillary or her campaign,” said Khawaja. “This is a hit job to make Democrats look bad.”

Lawyers for Nader did not respond to requests for comment.

The charges paint a picture of an effort by Nader to gain influence with Clinton’s supporters, and to hedge his bets by cultivating Trump’s team—all while reporting back to unnamed foreign masters. According to the indictment, in a July 19, 2016, WhatsApp message to an unidentified foreign official, Nader said he was “developing a steady, consistent and constructive relationship with both camps!” After Trump’s electoral victory, Nader appears to have hustled to ingratiate himself with the incoming administration. His attendance at the inauguration came as part of an effort in which he developed relationships with Steve Bannon, Donald Trump Jr., Jared Kushner, GOP fundraiser Elliott Broidy, and Erik Prince, the Blackwater founder and brother of Education Secretary Betsy DeVos.

The indictment also detailed WhatsApp messages in which Khawaja and Nader allegedly discussed plans for Nader to reimburse Khawaja for his donations, in part through allegedly fake invoices Khawaja sent Nader. Using what prosecutors say was a code, the men referred to funds as “baklava” and to Clinton as “sister.” These messages included hints that Nader may have been obtaining the funds from another source. When Khawaja pressed Nader in early July 2016 about the status of a reimbursement, Nader responded, “I shall pursue it vigorously!” Nader also told Khawaja that he was conferring with someone he called “HH.” In an August 4, 2016, message, for example, Nader told Khawaja he had met with “HH” and “as soon as we get back to [foreign city] prepare something with bakery for the upcoming event.” Nader told Khawaja that in this meeting, he “stressed important and unique role you are playing.”

“HH” was not identified in the indictment. According to the Mueller report and other public sources, Nader in 2016 was in direct contact with Mohammed bin Zayed, the crown prince of Abu Dhabi and the effective ruler of the UAE. Bin Zayed, known as MBZ, is referred to by many Emirates as “His Highness.” Press officials at the Emirati embassy in Washington, DC, did not respond to questions about whether the UAE is the unidentified foreign government referenced in the indictment.

Khawaja’s indictment makes him the second major Trump inaugural donor to be charged with illegally funneling earlier political donations to Democrats. In October, Imaad Zuberi, a California businessman who gave $900,000 to Trump’s inaugural committee, agreed to plead guilty in connection with a nearly 10-year scheme in which he solicited money from foreign people and firms to donate to US political campaigns on the foreigners’ behalf. As with Khawaja, prosecutors have not said if they are investigating whether the funds Zuberi gave to the inaugural committee came from another source. Zuberi told Mother Jones last year that his inaugural donation came from his own pocket.

Even if prosecutors were able to identify straw donations to Trump’s inaugural committee, they might face significant hurdles in bringing a criminal case. That’s because fundraising for presidential inaugurations is “not regulated as strictly as funds raised to influence the election itself,” says Paul Ryan, a campaign finance expert with Common Cause. In particular, the statute that prohibits making a contribution in the name of another person to a political campaign does not apply to inaugural committees. Thirteen of the charges in Tuesday’s indictment relate to violations of that law.

Peter Carr, a spokesperson for the Justice Department’s criminal division, which announced the indictment against Khawaja and Nader, declined to comment when asked about possible investigations related to the inaugural committee.

The charges against Khawaja and Nader come amid other legal problems for both men. Nader, who was convicted in the Czech Republic in 2003 of sexually abusing minors, was arrested in June in New York. He remains jailed on charges that include child pornography and transporting a 14-year-old child for sexual activity. On Monday, six attorneys representing Nader in that case filed motions to withdraw as his counsel. It’s not clear if their withdrawal has anything to do with the new campaign finance allegations.

In May, Khawaja and his firm agreed to pay the Federal Trade Commission $110 million to settle charges that the company knowingly processed payments for online firms—including sketchy debt collection and pornography outfits—that were engaged in fraud. Khawaja also faces an ongoing federal criminal investigation into his company’s conduct, according to people with knowledge of the probe. That investigation is apparently separate from the campaign finance case. Khawaja, who did not respond to questions about this probe, told Mother Jones in October that he had retained a high-powered legal team that includes former FBI director Louis Freeh and two former lawyers for OJ Simpson: Robert Shapiro and Alan Dershowitz. Dershowitz, a prominent defender of Trump, said Tuesday that he cannot comment on who he represents. Freeh and Shapiro did not respond to inquires.

Khawaja has said he has been traveling abroad for the past few months. In message sent Thursday, he said that he is in China but plans to return to the US to “deal with these fake accusations.” In a phone call in October, speaking from what he said was Tokyo, he was defiant. He argued that the allegations against him were manufactured by unnamed Republican operatives worried about his support for Joe Biden’s presidential campaign. Khawaja said his lawyers will “come down on” his critics “like the hand of God.”