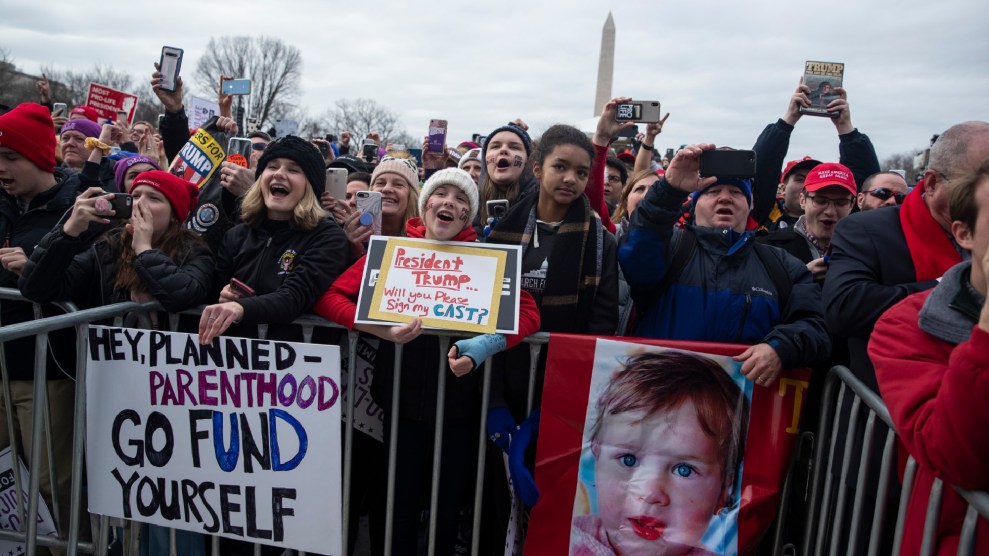 Supporters cheer while President Donald Trump addresses the annual March for Life rally on the National Mall on Friday.Evan Vucci/AP

While Democrats made their case to the Senate that President Donald Trump had betrayed the Constitution and national security in the interest of his own political gain, Trump was a few blocks away, declaring his undying loyalty to a fringe group critical to his reelection.

“The unborn have never had a stronger protector in the White House,” proclaimed Trump to a cheering crowd on the National Mall for the annual March for Life. It was the first time in the march’s 47 years that a sitting president addressed the abortion foes, whom past Republican presidents have considered too militant and extreme for an audience. But Trump, besieged by impeachment and in the fight for his political life, is relying on them more than most presidents.

Seth Evangola, who took the bus 11 hours from New Hampshire to attend his 10th March for Life, said he thought Trump was there in large part because he needed the marchers’ support. “I’m not sold that he fully understands the pro-life movement,” said Evangola, although he added that Trump “represents us well.”

“Trump is certainly more aligned with the pro-life movement than other president because he has to be,” says Mary Ziegler, a Florida State University law professor who studies the legal history of abortion.

The March for Life Education and Defense Fund, the nonprofit that organizes the march, has historically taken an absolutist stand on abortion that has made the event unpalatable to even anti-abortion politicians. It has argued that abortion bans should not contain exemptions for rape and incest, and in 2015, it claimed that birth control in all forms constitutes abortion.

Trump, a serial divorcer and admitted assaulter of women, hardly fits the typical mold of a Christian protector of sexual purity, but that didn’t deter abortion opponents who traveled long distances to show their support for the president. Natalie Mallinack, 26, who traveled from Ohio by herself to attend the March for Life, told me she thinks Trump’s appearance at the march reflects his belief in the anti-abortion cause but also the movement’s growing strength. “It means that this issue has persisted,” she said.

Arguably Trump’s biggest contribution to the anti-abortion cause has been his appointment of lifetime judges, particularly Supreme Court Justices Brett Kavanaugh and Neil Gorsuch, who could lead the court to overturn or chip away at Roe v. Wade. Not everyone at the march supports Trump—but they do appreciate the mark he’s left on the judicial system. Will Campbell, who traveled to DC from Ohio, said that he will not be supporting Trump in 2020 but is pleased with the attention Trump is bringing to the march and with his appointment of conservative judges who can challenge Roe.

Some marchers, including Evangola, told me they won’t be sold on Trump’s judicial appointees until they start delivering pro-life decisions. Dana Seisler, another marcher, who attended with her children, said that although she was excited about Trump’s conservative Supreme Court appointments, she doubted Roe v. Wade would actually be overturned.

For now, the marchers, and the country, are waiting to see what the justices do. But the president has given them a new sense of momentum. And that might be all he needs to lock down their support in November.