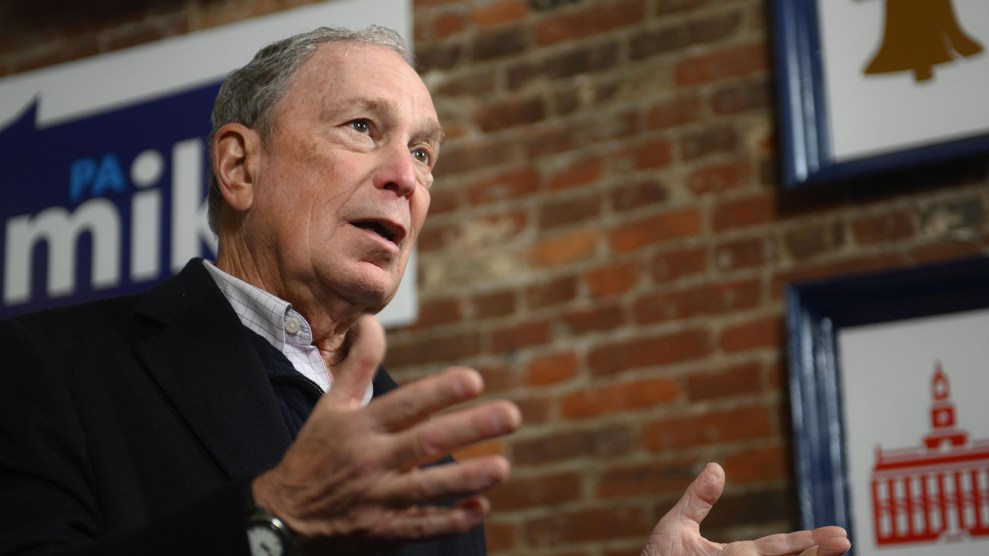 Michael Bloomberg hasn’t been a Democrat for long. The billionaire White House hopeful began his adult life in the party of FDR, but he switched to the GOP when he ran for mayor of New York City in 2001, winning the endorsement of Rudy Giuliani. Bloomberg later became an independent and then changed his registration to back Democratic in 2018, after endorsing Barack Obama in 2012 and Hillary Clinton in 2016.

Now, as he seeks the Democratic presidential nomination in a historically unorthodox and mind-mindbogglingly expensive campaign, Bloomberg is trying to demonstrate his commitment to his once-and-current party with a promise to fund 500 staffers and a $15 million voter turnout operation to support the eventual nominee. That news, first reported by NBC, came with a lingering question: Would he commit those kinds of resources to electing the Democratic nominee, no matter who it is? What if it’s Democratic-Socialist Sen. Bernie Sanders of Vermont (currently leading in Iowa), or Massachusetts Sen. Elizabeth Warren—both of whom have pilloried the influence of the uber-rich and have accused the Bloomberg of trying to buy the nomination.

Now Politico‘s Holly Otterbein adds some clarity: Yes, Bloomberg says he plans to spend big, even if that means spending big on behalf of Sanders and Warren.

I asked a Mike Bloomberg spokesman if this would apply if Bernie Sanders or Elizabeth Warren were the nominee and he confirmed it would. https://t.co/IVSeRdvfCU

That comes on the same day the Daily Beast reports that Bloomberg—after spending $200 million on his candidacy—is currently on pace to pick up zero delegates.

That’s potentially a very big deal. Bloomberg has faced criticism from some Democrats for his support of Republicans in the recent past. (In 2018, he raised money for New York Republican Reps. Peter King and Dan Donovan.) What’s more, the news comes amid a months-long drumbeat of other Democratic donors on Wall Street threatening to pull their money from the party if someone like Warren is the nominee.

But of course, this all comes with a giant caveat. The whole point of advertising in advance how magnanimous you’ll be to the eventual nominee is to convince people of your loyalty so they’ll make you the nominee instead. It’s one thing to say this in January; it’s another to follow through with it in July.