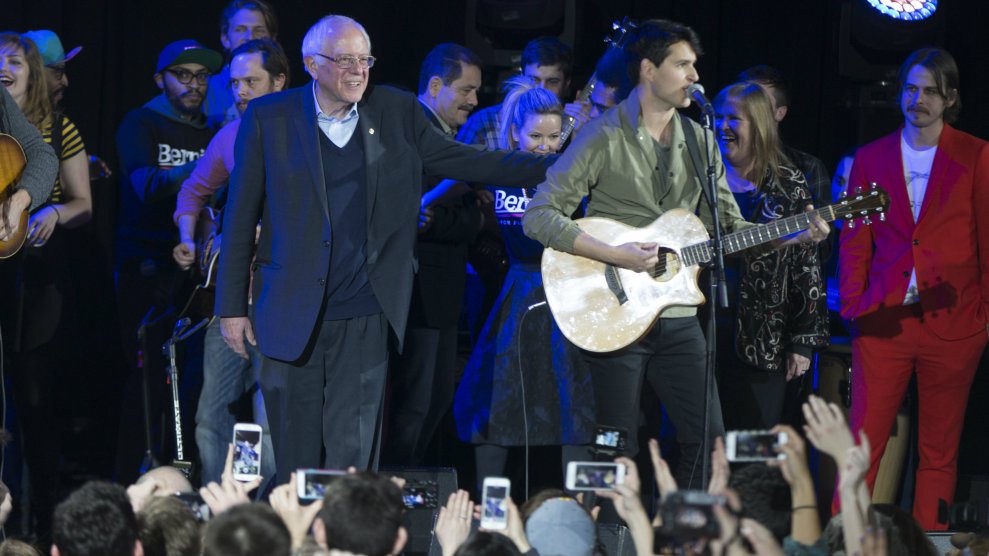 Evan Weiss was surprised when he got a text message asking if his band could perform at a rally for Bernie Sanders in Coralville, Iowa, in November. The text came from an old friend of Weiss who works for Sanders’ campaign as an event coordinator and has a hand in booking the music for campaign rallies. His band, an emo trio from Chicago called Pet Symmetry, formed in 2012 and has since toured the country several times, performing everywhere from dingy punk basements to big splashy festivals. But opening a political rally was a first. Pet Symmetry, as Weiss and his bandmates—drummer Marcus Nuccio and guitarist Erik Czaja—tell me, is a group of staunch Sanders supporters, but the band has “never written political songs, or have been outwardly political on our social media,” Weiss says, which is why he was a bit puzzled by the invite.

Pet Symmetry is hardly the first band that comes to mind as the ideal campaign rally musical guest, and the band readily admits that. “It was clear that the crowd we were playing for had no idea who we were,” Nuccio says. But a smallish indie band performing at a Sanders rally is not an anomaly for the Vermont senator’s 2020 presidential campaign. Music has played an important, if unorthodox, role for Sanders’ campaign. He’s cornered the market on speaking to the plugged-in, music-obsessed Pitchfork crowd. He’s closing out his push to win Iowa with a pair of major rallies headlined by Bon Iver and Vampire Weekend, superstars of the indie rock scene. And over the past few months his campaign has featured a diverse set of mostly smaller and younger up-and-coming artists at his rallies—the sort of bands that you might know if you keep up with taste-making music blogs like BrooklynVegan and Stereogum, or indie labels like Topshelf Records and Polyvinyl Records. Musicians whose own community and DIY-focused existence heavily mirror the Vermont senator’s populist grassroots campaign.

At a rally in Minneapolis in November, hip-hop guru Brother Ali and Prince’s former backing band, New Power Generation, revved the crowd up before Sanders and Rep. Ilhan Omar (D-Minn.) spoke to a crowd of thousands. A few weeks earlier at an October rally in Queens, where Rep. Alexandria Ocasio-Cortez (D-N.Y.) endorsed him, his campaign played the song “Expect the Bayonet” by grungy Philadelphia power-pop rockers Sheer Mag to hype the massive crowd before Sanders and AOC took the stage. At a different recent Iowa rally, another Chicago indie-emo outfit, Ratboys (who Nuccio also plays drums in) performed an acoustic set before Sanders took the stage. And in East Los Angeles in November, Grammy-winning Latin funk/punk/hip-hop band Ozomatli opened a Sanders rally. His campaign tried this out four years ago, too, with smaller artists like Tacocat, The Thermals, and Jessie Frye playing at his rallies, along with bigger artists like Killer Mike and Vampire Weekend. Most of these are not the household names one would expect to open for one of the leading Democratic nominees for president. (I reached out to Sanders’ campaign to learn a bit more about what goes into the process for booking the music for campaign rallies, but they declined to comment.)

“let me thank the ratboys for their music” –@BernieSanders pic.twitter.com/10IZr2E59u

Few Democratic candidates have galvanized young voters like Sanders. In the 2016 election, his campaign’s rise to prominence had much to do with his vast popularity among voters under 30. And for his 2020 campaign, that has held strong, with Sanders winning endorsements from youth-led progressive organizations like the Sunrise Movement and the Dream Defenders. A poll of Iowa voters released this week found that, among voters under 50 years old, Sanders posts a massive lead with 44 percent support (Elizabeth Warren was in second among that group at just 10 percent).

For Weiss and his bandmates, being invited to perform at one of Sanders’ rallies is in line with the grassroots, people-centered message at the heart of his campaign. And it taps into a younger, more artistically driven culture where a lot of those young supporters are. “[His] campaign has just surrounded themselves with very young, vibrant, artist-focused people who are really tapped into, I think, what his immediate voter fanbase is like,” Weiss says. Lissie Maurus, a singer-songwriter whose songs have been featured in television shows and movies and who has performed at two of Sanders’ rally, shares that sentiment. “Not every artist is going to be a chart-topping superstar,” she says, “but they have something to offer and contribute.”

Music has, so far, mostly played a periphery role for the Democrats vying for president. Warren has used Dolly Parton’s “9 to 5” as her go-to walk-out song to drive home the themes of class, politics, gender, and populism that she wants to define her campaign. Silicon Valley evangelist Andrew Yang is still trying to make “Return of the Mack” his thing. The “High Hopes” dance may haunt former South Bend Mayor Pete Buttigieg until the end of time.

But as the 2020 primary shifts into high gear—and the candidate field whittles down—you can count on music to play a much larger role. The Democratic candidates are starting to rack up endorsements from celebrities (Cardi B feels the Bern; Dave Chapelle and Donald Glover both came out as proud members of the Yang Gang; Mandy Moore has pledged her loyalty to Mayor Pete) who will no doubt stump for them on the campaign trail. And some may even break out a guitar to sing a song or two in support of their preferred candidate, much like Weezer’s Rivers Cuomo did at a Yang rally in November.

It shouldn’t be surprising that Sanders is hip with indie and punk scenes. As mayor of Burlington in the 1980s, Sanders and his wife, Jane O’Meara Sanders, opened up 242 Main Street, an all-ages government-funded music venue situated in an old administrative building in downtown Burlington. Over the course of 242 Main’s 30-plus-year history (it doors closed for good in 2016), the venue became a pillar of Burlington’s punk scene, occasionally hosting legendary bands like Fugazi, the Misfits, and Operation Ivy, but mostly as a breeding ground for local bands. This isn’t to say that Sanders is a huge indie-rock aficionado, though. Speaking to Vermont’s alt-weekly Seven Days in 2016 for 242 Main’s 30th anniversary, O’Meara Sanders said her husband is “not a great fan of rock music.”

For Weiss, it makes perfect sense that Sanders’ campaign is resonating across various music scenes. “He’s definitely the most punk-adjacent of the candidates. His messaging is all about community,” Weiss tells me. “It feels like he’s one of us. He’ll wax poetic about not being a Washington insider ’till the cows come home and that really resonates with us.”