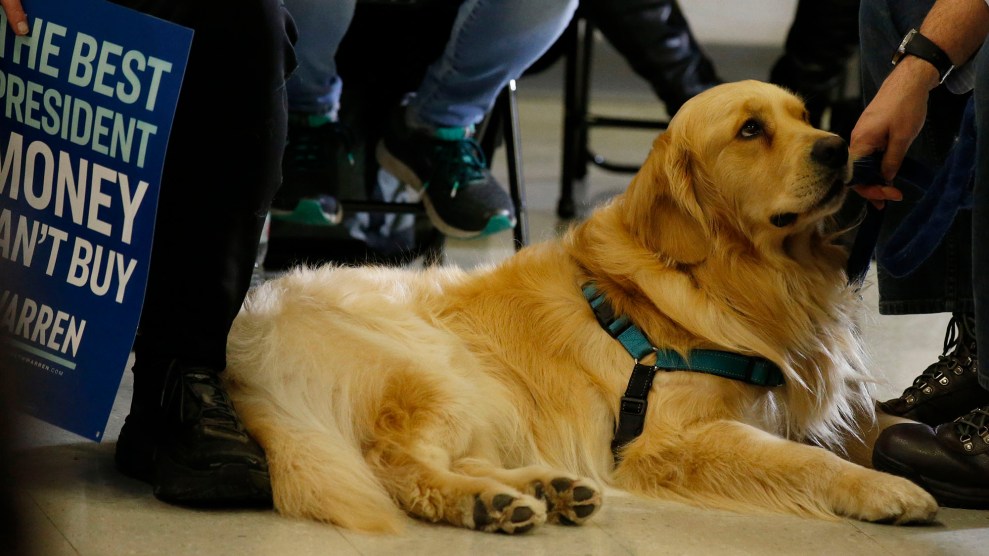 Bernie Sanders’ town hall in Creston, Iowa, on Friday afternoon had most of the trappings of the hectic homestretch of a presidential campaign. At a community college auditorium an hour southwest of Des Moines, volunteers handed out cards with information about caucus sites, and a local field organizer gave a hard-sell about picking up weekend canvassing shifts. There was the campaign bus, the security guards, and ample space in the back for TV cameras. On my way into town, I passed a pair of young Sanders supporters trudging through the slushy sidewalks with campaign literature tucked under their arms.

There was only one thing missing: the candidate himself.

Instead, about three dozen attendees heard from a physician who’s struggling with student loan debt; the senator’s wife, Jane; and filmmaker Michael Moore, who—in a line that Sanders will probably not choose to steal—told supporters that former Vice President Joe Biden’s closing pitch about electability was like a bad a dating profile. “Wow, that’s how low the bar is now?” Moore said. “All you gotta be is safe? If you were single and you went on Match.com and you were reading the profile and the guy said, ‘Go out with me, I’m safe,’ you’d be like, ‘Wow, I don’t think so!’”

Impeachment might be the biggest story in the news this week. But by keeping candidates off the trail, it’s also wreaking havoc on what is likely to be the biggest story in the news next week. Not only have three of the top five candidates in Iowa (Sanders, Elizabeth Warren, and Amy Klobuchar) been stuck in Washington for the Senate impeachment trial, they’re also all but muzzled while they’re there—trapped in the Senate chamber without cell phones, left to communicate only through questions read in the dulcet voice of Chief Justice John Roberts. The result is that Biden and Pete Buttigieg (okay, and Andrew Yang and Tom Steyer) have largely had the state to themselves. The senators’ campaigns have scrambled to fill their crunch-time programming with surrogates, spouses, dance parties, ice cream, tele-town halls, and even a chance to meet one very good dog.

How do you fill the gap? In Sanders’ case, he’s drawn from a mix of congressional endorsers and high-profile lefty activists. Reps. Ilhan Omar (D-Minn.), Rashida Tlaib (D-Mich.), and Pramila Jayapal (D-Wash.) were all in town this week for organizing events, along with Moore and the writer Naomi Klein. Meanwhile, Ben Cohen and Jerry Greenfield—usually just known just by their first names—barnstormed the state hosting ice cream socials for Sanders supporters.

The stop in Creston, one of seven Jane Sanders would be making in three days, was smaller than what Bernie Sanders typically draws, and there was none of the rock-concert atmosphere that sometimes accompanies him. (There would be a literal rock concert on Friday night featuring Bon Iver, however, if that was your thing.) Moore is long-winded and prone to long asides (one was about a peewee team) and though he has a certain cachet, he’s no substitute for the man whose name is on the bus; it’s a bit like having J.R. Smith take the game-winning shot when you also have LeBron James.

But there was also a positive tradeoff; the intimate setting afforded a chance for a different kind of politicking. That personal touch can still make a difference at a time when candidates are vying not just to be voters’ first choice, but to be their second, due to the way caucuses are organized. If a candidate fails to clear 15 percent in the first round of voting, their supporters are released and have to pick a new candidate to support.

Dyan Huffman, a retiree from Creston who was there with her husband (currently undecided), told me she was planning to caucus for Klobuchar on Monday, but after hearing from Moore and Jane Sanders, she’d decided to switch over to Sanders should the Minnesota senator fail to hit the 15-percent viability threshold. “He was wonderful,” she said of Moore, and she was impressed by Jane’s discussion of health care.

Warren, who has struggled in the polls in Iowa after rising to the top of the field in the fall, might be particularly hard hit by the impeachment schedule as she tries to make up ground. On Friday, a group of congressional endorsers, including Reps. Ayanna Pressley (D-Mass.), Deb Haaland (D-N.M.) and Katie Porter (D-Calif.), descended on the state for organizing events, culminating in a big rally in Des Moines. Afterwards, supporters decamped to a bar across the street to await Warren’s arrival in the city later that night. Perhaps a bigger sell, the candidate’s dog, Bailey, made a whirlwind three-stop swing at campaign offices in Waterloo, Waverly, and Fort Dodge. There are evidently worse surrogates to have; at the Des Moines rally, Warren’s husband, Bruce Mann, told the audience that just that afternoon, Bailey had persuaded a voter.

When I caught former presidential candidate and Warren endorser Julian Castro in Fairfield, Iowa, on Tuesday, his third stop of the day, a few dozen voters—mostly Warren supporters—were waiting for him at a tea shop with rows of prayer flags hanging from the ceiling. Cohen and Greenfield were already underway a few blocks down the street.

“They’ve got Ben and Jerry serving ice cream down the street,” Mo Ellis, a Warren fan, told me. “I told my friends, grab your ice creams and then come meet Julian!”

Castro’s visit was particularly significant for Danella Lubar of Fairfield, who was sitting by the front door. She had spoken with the former San Antonio mayor four years ago when he came to pitch voters on behalf of Hillary Clinton, and, though she was leaning toward supporting Warren, she wanted to hear directly from him as to why she should commit to Warren. Castro did his best to make the sell.

“One thing you need to be is able to forge those relationships,” he said. “Hey, I’m here!”

When it was over, a staffer invited attendees to get in line. Castro would be taking selfies with anyone who wanted one. Warren might have missed it; but some traditions must be observed regardless.