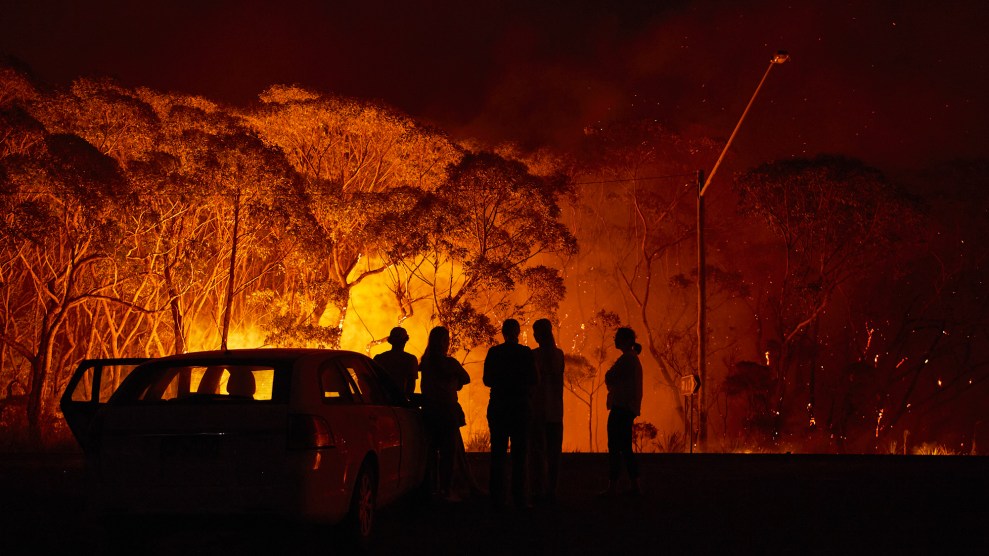 The start of 2020 was, let’s say, stranger than normal for the West family. My parents and I couldn’t get through to my older brother Marc, who was on summer holiday on the South Coast of Australia, a vast region boasting temperate forests and clear-blue bays south of Sydney—the perfect spot for a carefree escape from the city. But as the decade closed, the area exploded into a hellscape of runaway wildfires, the worst in Australia’s history. There’s currently no end in sight. At least 25 people have been killed. Marc, along with his partner and young family, were in the disaster’s midst, and we wanted to know if they were okay.

We knew from rolling coverage that communications and power had failed and fuel was short. Getting text messages out was hard. Marc was lucky: he wasn’t fighting the fires, or abandoning a home to the flames. But their initial plans had become instead an urgent need to escape. He needed to get gas and get out. Finally, after nearly two days waiting, we heard from Marc. He had found reception in a gas line where he was waiting for hours to fuel up.

“We were completely incommunicado,” he told me when I reached him to chat about the evacuation for this week’s episode of the Mother Jones Podcast. “Things that are happening just are just appalling. It’s nothing—it’s nothing like I’ve ever seen.” Blood-red skies blotted the coast as Australia’s biggest peacetime maritime operation got underway to rescue thousands of people who had no option but to shelter on the beach.

With the kids, Luka and Hazel, sitting in the back seat, Marc’s northward journey home narrowed to a few available roads, took much longer than the usual couple of hours. The scene outside the window was horrific. They drove through Cobargo, a town that gained international notoriety after two of their own perished in the flames and locals confronted the Prime Minister during a photo op, driving him from town with their rage and disgust at his inaction. “There are trees still burning,” Marc told me. “It must be so hot: The stories you hear about mountains in the distance exploding, and then fires racing down the hills and just scorching the earth.” Finally, after a marathon trip that lasted all day, they made it home.

Thick smoke near Cooma – this is a little earlier, now in a traffic jam due to new grass fires #NSWfires pic.twitter.com/qu8rPUk769

“It was a war zone through there,” he said. “It was appalling.”

Listen to Marc West recount his journey to me, his brother James, on today’s episode of the Mother Jones Podcast, along with American climate scientist Michael Mann, who studies the intersection between extreme weather and climate change and who happened to be in Australia for the fires: