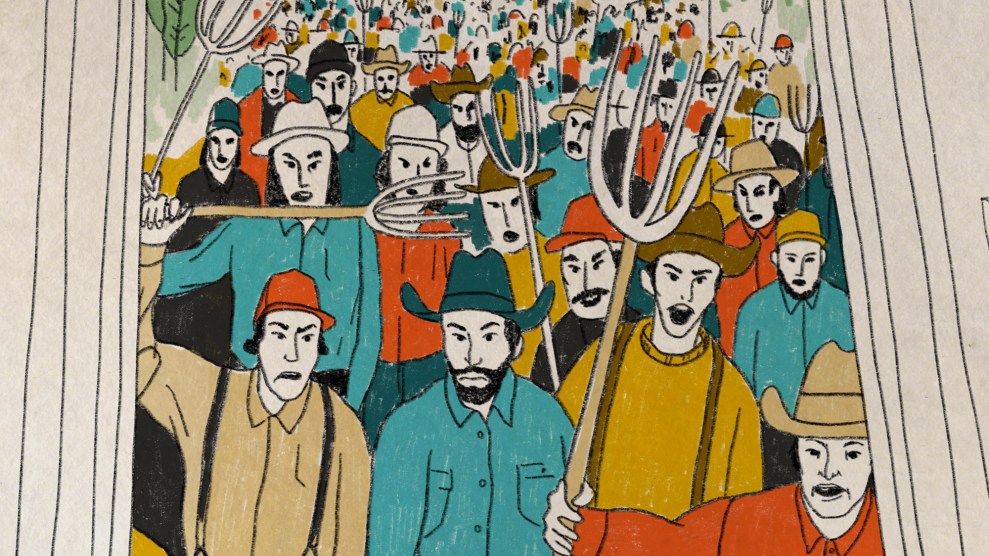 On an October morning, two men and a woman wearing cowboy hats, bearing American flags, and sitting atop horses rode into a windowless conference room in the depths of a Ramada Inn on the edge of Omaha. When they reached the front of the room and faced the crowd of about 500 ranchers, a man stepped to a podium flanked by a dozen American flags sticking out of hay bales and gave an animated recitation of the Pledge of Allegiance. The riders filed out, and the crowd erupted in cheers. Two men sporting yellow “Cowboys for Trump” T-shirts leaped to their feet in applause.

Today small ranchers get less than 40 cents of every dollar that consumers spend on beef.

This wasn’t a Trump rally. Rather, these ranchers, some from as far away as Alabama, had converged to demand that the White House rein in the power of massive transnational companies, like Tyson and Cargill, that slaughter and pack more than 80 percent of the cattle raised in the United States. As corporate meatpackers have expanded, small ranchers have been getting squeezed: In 1970, they earned about 70 cents of every dollar that consumers spent on beef; today small ranchers get less than 40 cents. Their profit margins have fallen nearly 30 percent since 2016, while packers’ profits have jumped 68 percent. Another measure of desperation, farmer suicides, are believed to be on the rise. As a succession of speakers harangued the crowd about the plight of ranchers, attendees were encouraged to tweet at the president and Agriculture Secretary Sonny Perdue, punctuating their complaints with #FairCattleMarkets.

Even as they lamented how they’ve been put out to pasture, the ranchers were reluctant to criticize the president. “We’re not here to cuss Trump, are we?” asked cattle-market analyst Corbitt Wall, a speaker. “I’m not, or I wouldna showed up.” Employing humor as broad as his hat, he drew laughs by ridiculing Rep. Alexandria Ocasio-Cortez (D-N.Y.)—who has called on consumers to reduce beef consumption to slow climate change—as a “bucktoothed bartender.” He also mocked Chinese people, suggesting they should eat more beef “if they’d like to win the Olympics in something besides pingpong.” But amid the racist schtick, he delivered a stirring critique of an industry that systematically deprives ranchers of market leverage, drawing laughs with the line “cowboys can’t compete with packers.”

None of the speakers who followed Wall cussed Trump, but they didn’t praise him, either. Joe Maxwell, the event’s mastermind, said that many people in the room remained enamored of Trump but were becoming irritated by his lack of action to help farming regions. “A lot of folks in those areas aren’t Ds or Rs,” he told me. “They’re hurting. They feel they’ve been ignored. They want to stay on their farms or in the rural communities, and they just want somebody to be a leader on their behalf.”

As a farm kid from Missouri, Maxwell became politicized during the mid-’80s farm crisis, when then–presidential candidate Jesse Jackson led a tractor brigade to the state Capitol in Jefferson City, rallying thousands of white farmers against the banks and big agribusiness. Maxwell joined the political fray as a Democratic rural populist, winning seats in the state House and Senate and serving a stint as lieutenant governor. He retired from electoral politics in 2005, but he’s reemerged as an organizer seeking to form unlikely alliances in the mode of his hero Jackson. In 2016, Maxwell worked with the Sierra Club and the Humane Society of the United States—groups generally despised in farm country—to defeat an Oklahoma ballot initiative that would have prevented communities from banning large confined livestock operations. The “right to farm” law lost by 20 percentage points, about the same margin by which Trump won the state.

Maxwell is the former director of the Organization for Competitive Markets, “a think tank of farmers” that organized the Omaha rally. The group is nonpartisan and isn’t out to knock Trump. But its partner organ­ization, Family Farm Action, has gotten Democratic presidential hopefuls Elizabeth Warren, Amy Klobuchar, and Cory Booker to support a “farmers’ bill of rights,” and Warren and Bernie Sanders have called for the breakup of agricultural conglomerates. More recently, Booker rolled out a Senate bill that would devote $100 billion over 10 years to help farmers escape from control of the big packers.

Maxwell said one obstacle to Democrats separating Trump from his rural base is that farmers have heard this kind of anti-corporate rhetoric before, with disappointing results. In 2008, presidential candidate Barack Obama campaigned against the hyperconsolidation of agriculture markets, suggesting he would rein in the behemoths that lord over dairy farmers in Wiscon­sin, cattle ranchers in the Plains, and poultry producers in the Southeast. Obama grabbed 45 percent of the vote in rural counties, edging past John Kerry’s performance in 2004. But once in office, Maxwell said, Obama largely failed to keep his promises, and farmers felt betrayed. In 2016, Hillary Clinton got just 34 percent of the rural vote, providing Trump with a decisive boost in battleground states like Iowa, Wisconsin, and Ohio. Across rural America, Maxwell said, Trump’s “drain the swamp” mantra sounded like a promise to stand up to the agribusiness lobby.

In reality, Trump has done the opposite. His administration has reversed late-Obama-era rules designed to level the playing field for ranchers and the massive meatpackers that buy their animals. Trump’s trade wars with China have hurt soybean prices, while corn farmers feel stiffed by new rules that free some gasoline refiners from mixing ethanol into their fuel. Farm bankruptcies surged 24 percent in Septem­ber, and farmers’ confidence in the economy is 20 percent below the peak it hit just before Trump’s election, according to a survey of 400 crop and livestock producers by Purdue Univer­sity. Meanwhile, amid the turmoil, Trump has tweeted that “Farmers are starting to do great again, after 15 years of a downward spiral.”

The ranchers in Omaha were receptive to the anti-corporate message coming from the podium. Mike Callicrate, a longtime industry critic who runs a small beef operation in Colorado Springs, delivered a stirring defense of government regulation as crucial for the functioning of fair markets, chastising President Ronald Reagan for tamping down antitrust enforcement and opening the floodgates that led to the corporatization of today’s beef market. The guys in the “Cowboys for Trump” shirts listened with rapt attention and applauded enthusiastically.

While there’s no indication that rural voters are abandoning Trump in droves, Democrats don’t have to flip the heartland to give the president the boot in 2020. They just have to chip away at his support—reaching vote percentages closer to what Obama got in 2008, Maxwell said. Right now, Perdue is the lightning rod. A day before the Omaha rally, Perdue told reporters at a dairy industry expo in Wisconsin—which lost more than a quarter of its dairy farms between 2015 and 2019—that “the big get bigger and the small go out.” This remark, which reverberated through the farm press, was like telling dairy farmers to “go home and hang yourself,” Maxwell said. “It’s clear that we have a secretary of agriculture that has zero interest in helping America’s independent farmers and ranchers—zero.” Several speakers called for Perdue’s firing. But the real trick will be to show that he’s following orders from the Oval Office.

Democrats don’t have to flip the heartland to give the president the boot in 2020. They just have to chip away at Trump’s support.

“Trump is a smart man—he knows he doesn’t know everything,” said David Wright, a fourth-generation cattle rancher from Holt County, Nebraska. “The question becomes, who are you surrounding yourself with?” When it comes to regulating beef markets, he said Trump’s “been getting some pretty bad advice.” As we filed out of the conference room, Teresa Bammerlin, who’s been raising cattle for nearly 50 years in Mills, Nebraska, explained why she made the four-hour-plus drive to Omaha: “You can hardly break even with the prices that we have.” I asked if she thinks the president is looking out for ranchers like her. “No,” she said. Whose interests is he defending? “Big business.”