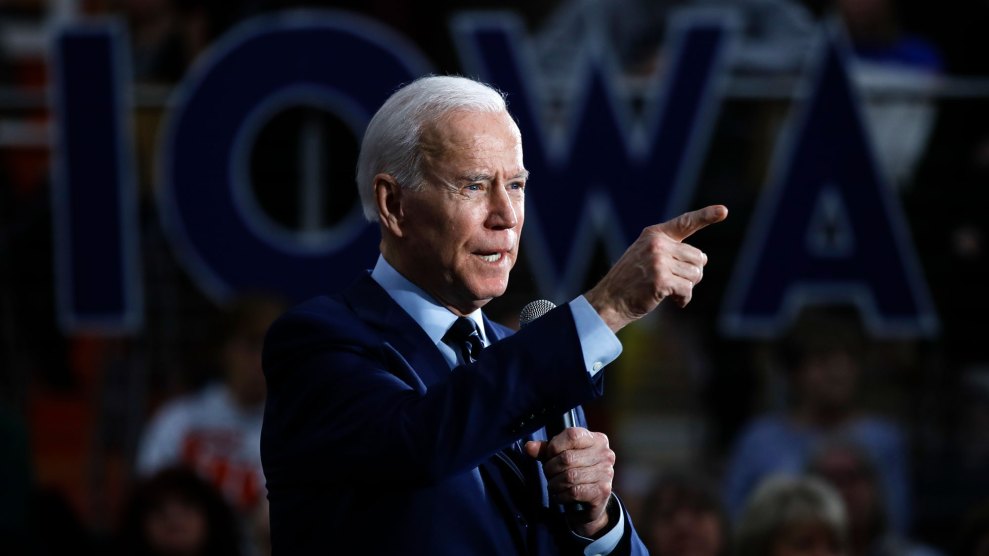 On Monday, Biden stepped in front of a Black congregation at Bethlehem Baptist Church in South Carolina and condemned the hate pushed by President Donald Trump and his white supremacist supporters. Throughout his campaign for the Democratic presidential nomination, Biden has framed the fight against the white supremacist president as a battle for America’s soul.

“Folks, some mornings I wake up and I think it’s more like what it must have been in 1920 than 2020,” Biden said early in his remarks. He lauded the civil rights movement, which had made “real progress” that had seemed unstoppable until recently.

“I thought you could defeat hate. But hate only hides. It never fully goes away,” Biden noted. He turned to tiki-torch-touting white nationalists in Charlottesville, condemning the anti-Semitic bile that reminded him of Nazi Germany, and brought up the president’s response to that moment: that “there were very fine people on both sides.” He talked of the segregationist Bull Connor, who, Biden said, intended to “drive a stake in the heart of the [civil rights] movement.” He linked the president to the Ku Klux Klan and drew battle lines between the president’s white supremacist views and those of people like Biden who support racial progress.

“They think they’ve beaten us again but they have no idea. We’re just coming back,” Biden said to applause.

All well and good, as these things go. It was a Martin Luther King Jr. Day event, and various pieties about “racial progress” and defeating “hate” are to be expected. But Biden made some other remarks in South Carolina, and whatever germs of racial obtuseness you might have discerned in his comments above now began to flower. The Washington Post reported:

Former vice president Joe Biden, who has been leading the polls in South Carolina by a large margin, spoke of the racial progress that occurred when he served under Obama, the first black president. He told the crowd that, with this election, “we have a chance to rip out the roots of systemic racism in this country.”

“The Bull Connors of today don’t stand in the street with fire hoses and dogs,” he said, referring to the infamous segregationist. “They wear nice suits. They wield their power rolling back rights, punishing the poor, denying access to health care and quality education and turning away refugees and asylum seekers.”

The problem is that the Bull Connors of Bull Connor’s day also wore suits. Bull Connor wore suits. The suit-wearers and the snarling dogs were and remain part of the same system of racial apartheid. Biden prefers a fairy-tale version of history in which racism was once solely the province of the oafish bad guys because in those days he was throwing his lot in with the suit-wearers. The “poisonous, divisionist politics” espoused by President Donald Trump are grounded in the same racism of those who decried busing during the pursuit of school integration and played nice with segregationists in the spirit of “civility” and supported measures that resulted in mass incarceration and ravaged Black and Brown communities for decades. The racial order Trump has promised to defend, Biden helped to build.

Just last week, the New York Times published an interview with Biden in which its editorial board pressed him on comments he had made earlier in the campaign about disparities in educational achievement between white and Black children. In a debate in September, Biden had said some garbled stuff about Black parents putting a record player in their kids’ bedrooms at night, citing dated and disputed research about the so-called “word gap.” (It’s hard to accept a study in which most of the “welfare” families were black and most of the “professional” households were white.) He was making a point about the failures of Black parenting. “We bring social workers in to homes and parents to help them deal with how to raise their children,” he said, touting a home visitation program begun under the Affordable Care Act. “It’s not want they don’t want to help. They don’t know quite what to do.”

In the Times interview, Biden continued in this vein, blaming Black parents for racial disparities in educational achievement: “My point was to make it clear that there are a number of things we can do now to help parents who have been disadvantaged as a consequence of lack of opportunity to be able to provide more guidance and better guidance for themselves and their families.” He mentioned his wife, a longtime teacher. “The people who don’t show up on the nights when there’s a parent-teacher meeting are not people who in fact don’t care, but folks from poor backgrounds. They don’t show up because they’re embarrassed,” he said. “They’re embarrassed the teacher’s going to say—and it’s hard to say, ‘Well, I can’t read.'”

Paternalistic, suffused with the goodness of its intentions, Biden’s answer called to mind a different sort of suit-wearer—not the genteel segregationist but the concerned liberal who identifies in the black family “a tangle of pathologies.” He was responding to a question about how he’d combat the legacies of slavery. To chalk up to bad parenting what is plainly a residue of structural racism it to perpetuate the myths that Biden has sought to condemn.