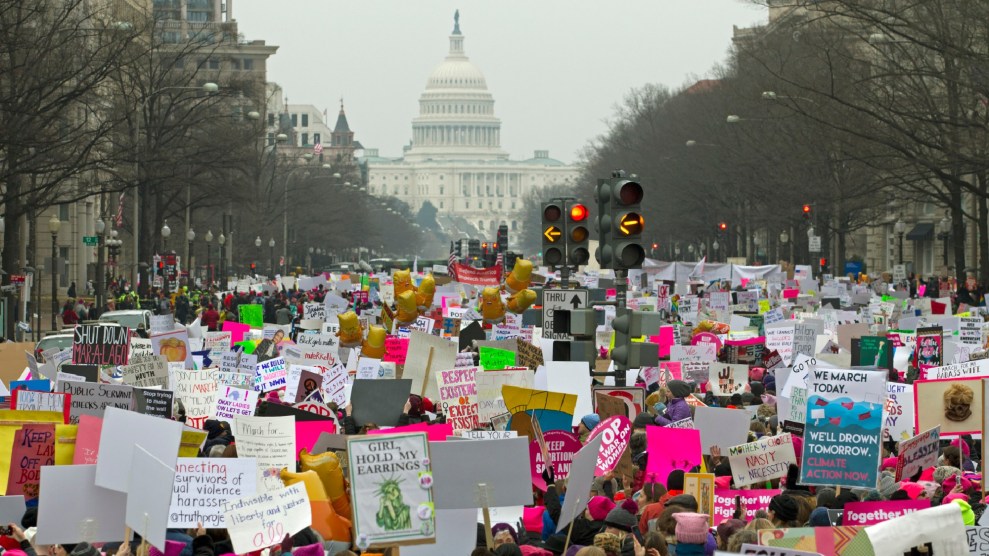 Three years ago, nearly half a million women and their allies descended on the nation’s capital to showcase their outrage over the election of Donald Trump and launch a new movement for women’s equality. On Saturday, fewer than 10,000 participants are expected to attend the fourth annual Women’s March in Washington, DC. But to leaders of women’s movements around the country, the decline doesn’t represent a collapse of women’s activism, but rather a channeling of the energy of the 2017 Women’s March into more tangible causes at the state and local level across the country.

“I see the Women’s March from 2017 as a very public statement,” says Hilary Levey Friedman, president of the Rhode Island chapter of the National Organization for Women, who participated in the 2017 Rhode Island Women’s March. She adds, “Of course that same event just isn’t going to get the same continued attention, but that doesn’t mean that that power and interest has dissipated. It just means that people are learning to harness it on specific things.”

Rhode Island is at the center of that new effort. State legislatures passed more bills to protect abortion rights in 2019 than in the previous 10 years combined. Rhode Island hadn’t adopted pro-choice legislation in more than 40 years when it passed a bill in June to guarantee the right to an abortion in case Roe v. Wade is struck down.

Kelly Nevins became executive director of the Women’s Fund of Rhode Island, a local nonprofit that invests in women and girls, just two weeks before the election of Donald Trump. She remembers the rush of activism that followed the 2017 Women’s March. “We had been fairly quiet for a while,” says Nevins, “but when all of that happened, there was a surge of people, particularly of women, that felt that women’s rights were being attacked and had a thirst and interest for doing something local.”

Nevins’ organization joined with several other groups, including the Womxn Project, the Rhode Island chapter of NOW, and Planned Parenthood of Southern New England, to push the Rhode Island state legislature to pass the abortion rights bill last year. This was a massive feat in the country’s most Catholic state, where several top Democratic lawmakers had been endorsed by Rhode Island Right to Life, an anti-abortion group. Nevins credits the show of force at the Women’s March with empowering women.

Still, 2019 was hardly a slam dunk for women’s rights. The onslaught of abortion bans, primarily in the South and Midwest, demoralized many women and may have left many feeling that there was nothing to celebrate three years after Trump’s inauguration.

The declining number of marchers may also have to do with the controversy surrounding last year’s march. Tamika Mallory, one of the co-presidents of the 2019 march, was criticized for attending an event with Nation of Islam leader Louis Farrakhan, where he recited anti-Semitic conspiracy theories. Sources told Tablet magazine that Mallory had said Jewish people were particularly guilty of exploiting black and brown people and were leaders of the slave trade. The Women’s March later issued a statement disavowing Farrakhan and anti-Semitism. Mallory ultimately stepped down. Amid the controversy, so did two other leaders of the march, Linda Sarsour, a Palestinian-American activist, and Bob Bland, a fashion designer and activist.

Meanwhile, some activists had begun to question whether the original march represented real activism or just dissatisfaction with Trump’s election.

Isa Noyola, a trans Latina activist and a new member of the march’s executive board, acknowledges previous critiques of the march and believes that despite the smaller crowds, this year’s march will be a productive and intersectional space. “I was not a part of the first marches, nor did I feel represented,” explains Noyola, adding, “I was very critical in the beginning.” As someone involved in activism for most of her life, she felt that the original march struggled to center marginalized communities that had already been engaged in fights for equality long before the march’s inception. She also thought it had a hard time connecting to grassroots organizers.

One of the biggest changes this year will be a focus on four core issues—reproductive rights, immigration, gender-based violence, and climate change—marking a departure from the broad scope of the first march. Noyola says this year’s march will highlight global movements for women’s liberation and grassroots activism. There will be no speakers or celebrity guest stars. Instead, the Chilean protest group Lastesis will lead demonstrators on a march to the White House, where they will perform a rendition of “Un violador en tu camino” (“A rapist in your path”), a Chilean anthem that has come to represent global movements against gender-based violence.

“This is a marathon, not a sprint,” says Noyola. “For folks not showing up, there’s so many opportunities to show up in your local communities, your local organizing.”