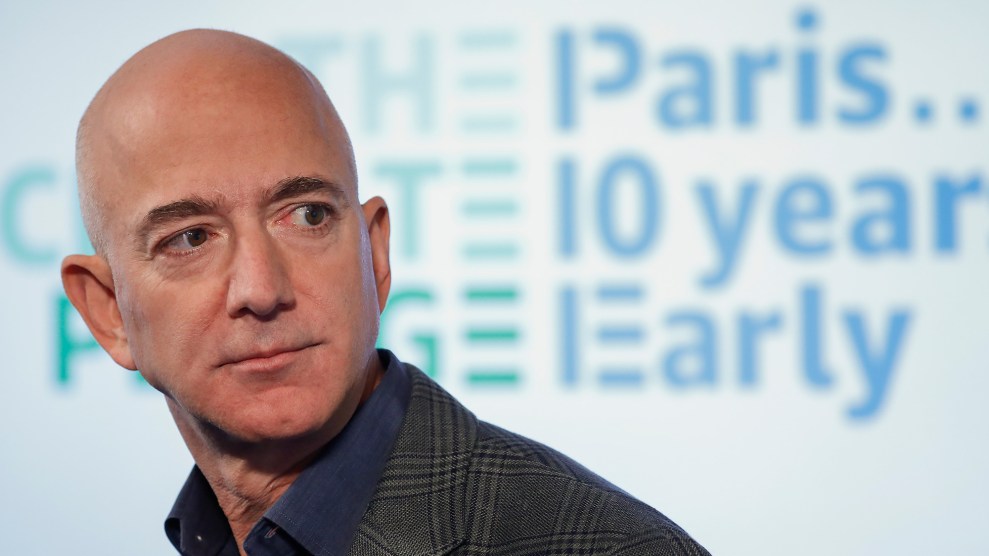 The Jeff Bezos Sexting Saga just took another wild turn. On Wednesday, the United Nations called for an “immediate investigation” of the alleged hacking of Bezos’s iPhone, citing forensic evidence showing  that a WhatsApp account linked to the Saudi crown prince himself, Mohammad Bin Salman, infected the billionaire’s phone while the two were chatting in May 2018. The vehicle for the hacking was alleged to be a video file that allowed the Saudis to suck up reams of Bezos’s personal data, according to The Guardian, which first reported the story on Tuesday.  The implications of the hacking claims are not limited to Bezos’s cybersecurity. They potentially pose tough questions for the Trump-allied proprietor of American Media Inc., which until recently owned the National Enquirer, itself at the heart of the Trump campaign’s hush money imbroglio.

Team Bezos has long claimed that MBS has it out for the Amazon chief, who also owns the Washington Post. The paper’s relentless coverage of the grisly death of its columnist, Jamal Khashoggi, allegedly enraged the Saudi leader, who was implicated in ordering Khashoggi’s murder. That’s where the so-called dick pics come in. Almost a year ago, Bezos accused the National Enquirer and AMI of trying to extort him over compromising photos he allegedly exchanged with his girlfriend, and he published email exchanges on Medium to prove it. Gavin de Becker, a veteran private investigator for Bezos, soon made a related and more incendiary charge: Saudi Arabia had swiped “private information” from the billionaire’s phone and was “in league” with the Enquirer to bring down Bezos by threatening to publish the photos. AMI has insisted that its sole source for information about Bezos’s relationship with Lauren Sanchez was her brother Michael Sanchez. He has denied trading the selfies. (Sanchez declined to comment for this article. Gavin De Becker also did not respond to requests for comment.)

Now, UN special investigators Agnès Callamard and David Kaye, are lending their credibility to the intel, which was conducted by a team hired by Bezos, according to the Financial Times. “The information we have received suggests the possible involvement of the crown prince in surveillance of Mr. Bezos, in an effort to influence, if not silence, the Washington Post’s reporting on Saudi Arabia,” the joint statement read, according to the Guardian. “The allegations reinforce other reporting pointing to a pattern of targeted surveillance of perceived opponents and those of broader strategic importance to the Saudi authorities, including nationals and non-nationals.”

Saudi Arabia “was clandestinely waging a massive online campaign against Mr. Bezos,” the experts said. The Saudi embassy in Washington labeled the allegations “absurd.” The Financial Times, which saw the forensic report, notes that “it does not claim to have conclusive evidence and its findings could not be independently confirmed.”

So where does this leave the allegation that the National Enquirer was “in league” with the Saudis? As I reported in August last year, any federal investigation could complicate a deal crafted to protect the Trump-allied owner of AMI, David Pecker, in his company’s 2016 campaign finance scandal. I reported that during the early months of 2019:

…federal investigators began requesting corporate documents and questioning staff at American Media Inc., the company run by Donald Trump’s longtime friend David Pecker, about a special issue of the National Enquirer it produced that lavished praise on Saudi Arabia and its controversial leader, Mohammed bin Salman, according to two sources with direct knowledge of the investigation. Gathering evidence through at least June and working at the direction of prosecutors from the Southern District of New York, FBI agents zeroed in on the circumstances behind the magazine’s publication and, according to one of the sources, whether AMI had engaged in illegal influence peddling on behalf of a foreign power.

The Saudi influence probe could have profound implications for AMI, according to former federal prosecutors, because it threatens to undo a deal the company struck last year with the Justice Department over its role in the hush-money case that resulted in campaign finance charges against Donald Trump’s former lawyer and fixer, Michael Cohen, who is serving three years in prison for that and other crimes. AMI agreed to cooperate fully with investigators and in return received immunity from prosecution. Yet that deal could be tossed out if AMI was suspected of engaging in other wrongdoing… Former federal prosecutors say that if investigators are scrutinizing AMI for possible FARA violations, extortion, or other crimes, the company should be worried that its non-prosecution deal for the hush-money payment is in serious jeopardy.

Both SDNY and AMI did not respond to new questions from Mother Jones today about whether or not the probe was ongoing, or if the UN’s call to investigate Saudi hacking could affect their plans. For the dizzying story of how AMI came under scrutiny by the feds as a possible agent of Saudi Arabia, featuring a cast of characters that includes the world’s richest man, a Saudi leader who has forged deep ties to the Trump administration, and an embattled media baron with a reputation for using his flagship tabloid to protect his allies and punish his enemies, click here.