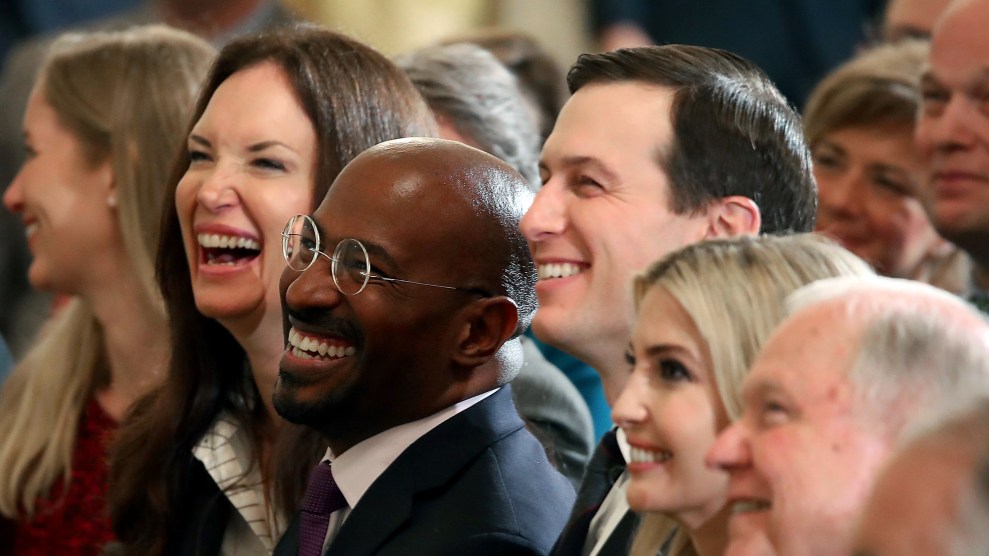 As the Senate impeachment trial gets underway, lawmakers are sticking closely to the marching orders for their chosen tribe. Partisanship hangs over the nation, heavier than ever.

But Van Jones says he hasn’t give up on meaningful bi-partisan cooperation. The CNN star worked in the Obama White House as the “Green Jobs Czar”, part of a 30-year career that has seen him take on some of America’s most progressive causes, including the fight against mass incarceration. And under the Trump administration, he achieved his greatest victory in criminal justice reform yet. In December 2018, President Trump signed the First Step Act into law, an important reform that ultimately led to thousands leaving prison.

While Jones has repeatedly called out Trump for being a bigot and a bully, he caught major heat from fellow progressives when he publicly praised Trump and the Republican party for their work on the First Step Act.

“Well, let me just say, with Trump, I got 99 problems, but prisons ain’t one,” Van Jones tells Washington DC bureau chief David Corn on this week’s episode of The Mother Jones Podcast. “It’s possible to literally oppose someone on every issue. But on the one issue, you agree with them, try to get something done.”

“There’s a whole other value system on the right that is also offended by mass incarceration,” Jones says. “They see is an attack on liberty.”

Late last year, Corn joined Jones onstage for a live event at George Washington University, and asked him: When do you compromise? When do you cooperate? And what to do when you find yourself caught in brutal partisan crossfire?

Following the success of First Step at the federal level, Jones is trying to harness this right-left coalition to push for additional reforms on probation, parole, prison re-entry, and prosecutor misconduct, on both the federal and state levels, from his position as CEO of Reform Alliance, which advocates for criminal justice.

“It’s already spawned about half a dozen copycat bills across the country,” Jones tells Corn. “There will be more bills. Trump would sign another bill tomorrow… But it’s deeper than that. This network that’s been developing is starting to grow.”