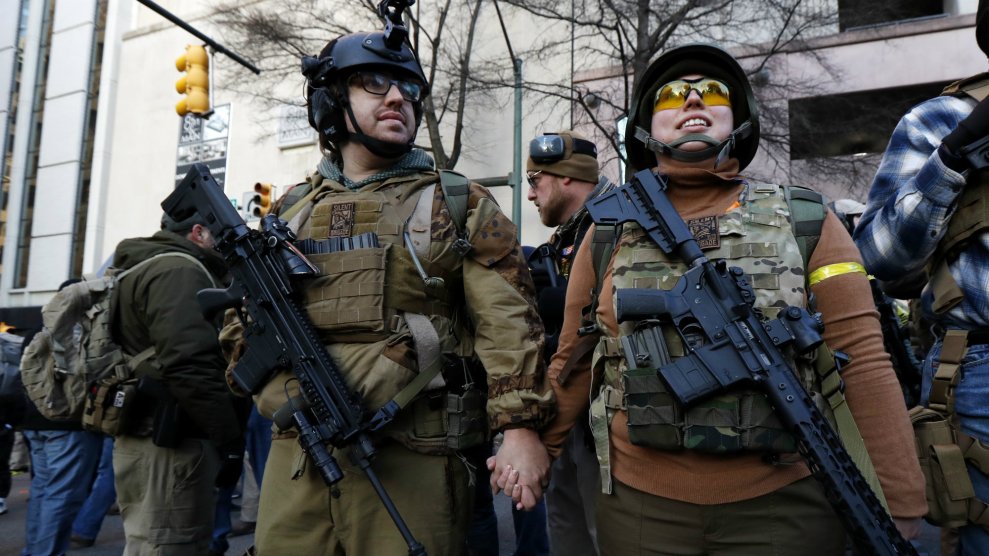 It had all the ingredients for a powder keg: Thousands of heavily armed protesters pissed off about proposed gun control laws, troubling online calls for violence and a new civil war, and echoes of a deadly rally that took place in the same state three years ago. But the pro-gun rally in Richmond, Virginia, on Monday did not end in violence, as many had feared. Instead, it ended with the shrill, gravelly baritone of Alex Jones’ voice, as the notorious conspiracy theorist and Infowars founder popped out of a hatch from inside an armored Infowars’ vehicle, cruising around and screaming at passersby through a megaphone.

Ever since a newly elected Democratic majority took control of Virginia’s state legislature in November, gun owners and 2nd Amendment activists have been preparing for a fight to protect the state’s gun laws, which for years—partially because the headquarters of the National Rifle Association are located in the state—have been some of the loosest in the country. The gun rights group Virginia Citizens Defense League had planned a peaceful pro-gun rally on the Martin Luther King, Jr. holiday, which in Richmond happened to fall on Lobby Day, an annual day for residents to lobby lawmakers on all sorts of issues, including gun laws.

But in the weeks leading up to the massive gun rally, neo-Nazi and fascist groups online shared plans to co-opt the rally to advance their own violent agenda. On Facebook pages, and on sites like 4chan and the encrypted messaging app Telegram, militia members, fascist coalitions, and white supremacists were calling the day the “boogaloo”—neo-Nazi slang for the start of a new civil war. “If you are not ready to leave your family, friends and daily life and get violent then you need to sit the fuck down,” said one message posted to Telegram by an account with over a thousand followers. Last week, the FBI announced they had arrested seven members of the extremist neo-Nazi group known as The Base, three of whom had allegedly planned to attend the Richmond rally and commit acts of violence.

In response to the heightened sense of potential danger, Virginia governor Ralph Northam declared a state of emergency, temporarily banning weapons from the grounds of the state capitol—Virginia law allows gun owners to openly carry firearms without a permit. But his move only exacerbated the fury of gun advocates.

To get into the official rally space on the Capitol grounds, where the VCDL had set up a stage for local pro-gun activists and politicians to address the crowd, attendees had to go through a single gate lined with metal detectors—no one packing heat could slip through. Instead, thousands of gun-wielding Second Amendment advocates—many of whom were carrying assault weapons and AR-15-style rifles—crowded the streets around the security perimeter of the capitol grounds. Many proudly held signs that said, with variations, that Northam and other government officials could “pry their guns out of their cold, dead hands” and that “gun rights are civil rights.”

If any other members of The Base were in attendance, they did not make themselves known, and the only neo-Nazi I spotted was Jovi Val, the disavowed former Proud Boy, who was booted from the group because his anti-Semitic and racist views were too extreme even for this far-right group. He has been an outspoken supporter of Jason Kessler, who organized the deadly Unite the Right rally in Charlottesville in 2017, as well as James Fields Jr., the avowed neo-Nazi who killed Heather Heyer at that rally and is now serving a life sentence. Though members of other far-right groups—including the Three Percenters, the Oath Keepers, and Proud Boys—were spotted at the rally, the crowd mostly consisted of a smattering of militia types and extremely vocal Donald Trump supporters wearing MAGA hats and frequently breaking out into chants of “TRUMP!” and “USA!” Trump did not attend, but he managed to fire off a tweet in support of the rally:

The Democrat Party in the Great Commonwealth of Virginia are working hard to take away your 2nd Amendment rights. This is just the beginning. Don’t let it happen, VOTE REPUBLICAN in 2020!

Inside the state capitol, it was business as usual for all lawmakers, with a full session of the state’s House of Delegates and Senate, as is Lobby Day tradition. Though the rally outside the state capitol was peaceful, there was no shortage of rage, especially directed at Northam, with signs comparing him to Adolf Hitler and other famous fascist leaders throughout history.

Nonetheless, despite the anger and the tensions, the violence that had been feared never took place. Local law enforcement officials estimated that 22,000 people were in attendance, and only one person was arrested—a 21-year-old woman who allegedly broke the state’s anti-mask law (though, for what it’s worth, I saw hundreds of militia-styled attendees in masks at today’s rally).

One reason for the relative calm might be that unlike previous right-wing rallies, there was no counter protest. Antifa and gun control groups like Everytown and Moms Demand Action urged their supporters not to show up to counter protest, citing the concerns for safety. “I think that their intimidation tactics are a way to scare us into backing down,” said Courtney Champion, a volunteer with the Virginia chapter of Moms Demand Action for Gun Sense in America. Despite the threats of violence, Champion, along with a few other Moms Demand Action volunteers were in a hotel room a few blocks from the rally where they closely monitored the day’s events. “I think that a lot of the pushback that we’re getting right now is because we flipped our state’s legislature in the NRA’s backyard,” she added, “and they know that we’re winning.”