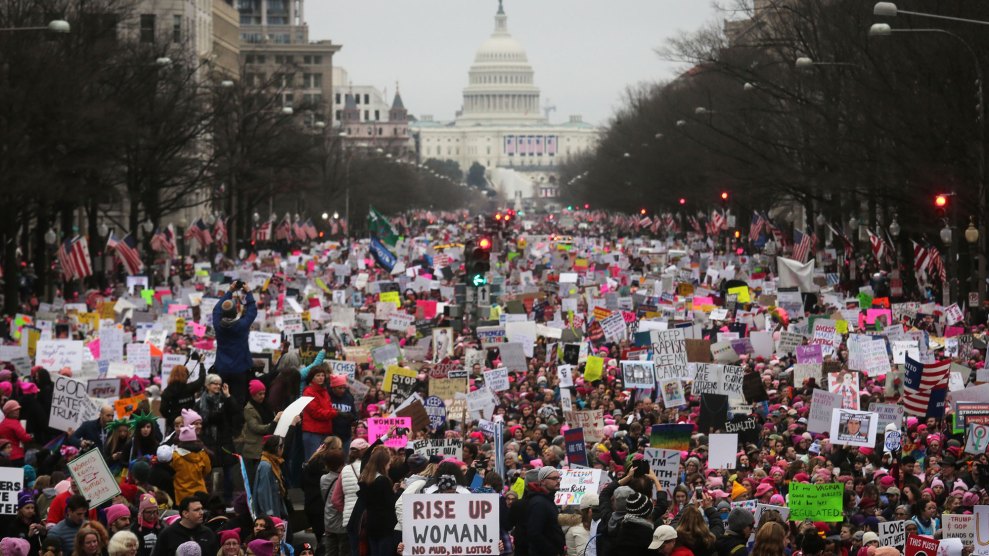 If you had stepped into the National Archives in the past few weeks and entered an exhibit meant to honor women’s suffrage, you would have seen an iconic photograph of the 2017 Women’s March in Washington, DC. But if you looked closer, you might have noticed that words on certain signs—like those critical of Donald Trump—were blurred out. Signs displaying the words “vagina” and “pussy” were also camouflaged.

At least that’s what Washington Post reporter Joe Heim realized. He tracked down the original image, taken by Getty Images photographer Mario Tama, and confirmed that the photo in the National Archives gallery had been doctored.

A day before activists kicked off a smaller Women’s March across the country, a spokesperson for the National Archives told the Washington Post that 2017 image was altered “so as not to engage in current political controversy.” In other words, the non-partisan federal agency wanted to keep depictions of fervid political outcry out of a historical portrait of activism. The National Archives soon apologized for altering the image and pledged to “replace it as soon as possible with one that uses the unaltered image.”

We made a mistake.

As the National Archives of the United States, we are and have always been completely committed to preserving our archival holdings, without alteration. pic.twitter.com/VTWOS4R7GY

The changes may have been overlooked if it had not been for Heim’s watchful eye. Here’s how he got the story:

A number of people have emailed asking how we learned the National Archives had altered the photo from the 2017 Women’s March. The short answer is: chance. The little bit longer answer I’ll explain in this thread.
1/?

I was at the Archives earlier this week for a totally unrelated story about tourists coming to the Archives look at the Constitution (a story I still hope to write). On the same floor there is the Women’s Suffrage exhibit with this very large photo at the entrance 2/?

I stopped to look at it. As I was trying to read some of the signs the marchers were carrying, I noticed one was blurred out. I thought that was odd and so I looked more closely at the rest of the image and saw other signs that had been blurred. So I took the photocredit info 3/?

and walked back to my office and found the original photo online. Our photo editor, Mark Miller, printed it out for me. I took it back to the Archives to compare against the one on display and that’s how I determined what had been changed. Then I contacted the Archives. – End –