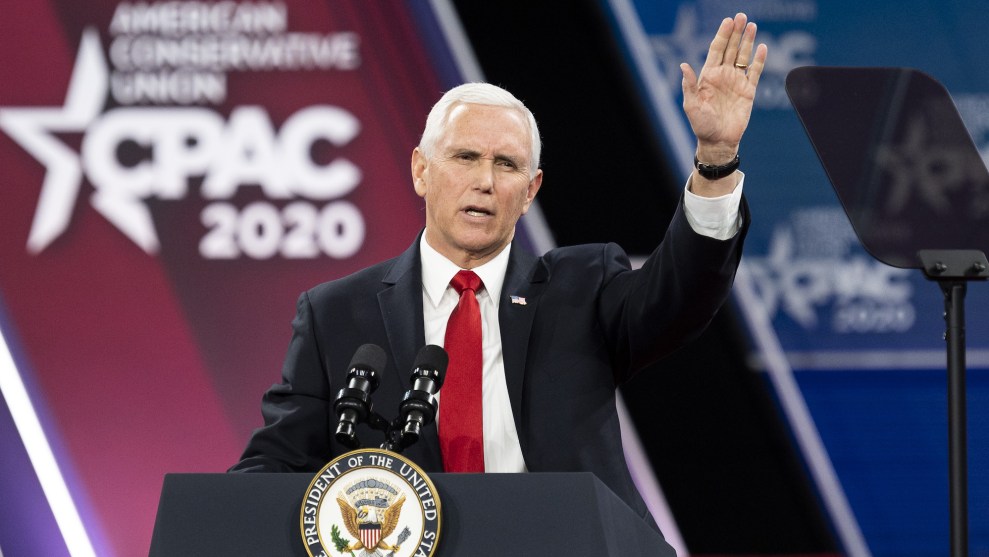 On Wednesday night, President Trump announced that he was putting Vice President Mike Pence in charge of the White House coronavirus task force. The next day, Pence got right to work—by heading to the Conservative Political Action Convention, a pro-Trump conservative confab outside Washington. “President Trump has no higher priority than the health, safety, and well-being of the American people,” Pence told the MAGA hat-wearing crowd. He touted Trump’s “unprecedented actions” to prevent the virus’ spread in the United States, where the risk of contracting it “remains low.” He reassured the crowd, “We are ready for anything.”

Four other task force members also had plenty of time in their schedules to address the event, along with a gaggle of high-level White House officials who have been on hand to feed red meat to some of Trump’s most loyal fans. And if they’ve mentioned the virus at all, their message has been consistent: Don’t worry, be happy. In the CPAC bubble, America is still the greatest country in the world. The economy is strong, and everyone is winning again, and if the stock market suffered the biggest one-day loss since the financial crisis in 2008 because of the coronavirus, well, seize the moment to buy low.

Acting White House chief of staff Mick Mulvaney went so far as to dismiss concerns over the epidemic as a media conspiracy conjured up to destroy Trump. “They think this will bring down the president, that’s what this is all about,” Mulvaney told the CPAC crowd early Friday. Like other administration officials at the event, Mulvaney hyped Trump’s “extraordinary steps” to halt the spread of the virus, notably banning noncitizens from entering the country from China. And he downplayed the seriousness of the virus. “The flu kills people,” he said. “This is not Ebola. It’s not SARS, it’s not MERS. It’s not a death sentence, it’s not the same as the Ebola crisis.”

Among the task force members at CPAC was acting Homeland Security Secretary Ken Cuccinelli, the former Virginia attorney general known for being an immigration hardliner, who suggested that the virus might create the need for even harsher limits on who could enter the country. He insisted that despite what you’ve heard from the media, Trump “has been whipping us with wet noodles” these past weeks to address the epidemic. Panel moderator Deneen Borelli, a Fox News commentator, asked Cuccinelli whether it was important to secure to border to combat the spread of the virus because “people who come here illegally could have diseases.”

He said Immigration and Customs Enforcement had lots of experience with diseases at the border, including TB and measles. But he said the scale of the coronavirus had the potential to be much bigger and might require even more drastic measures. “We do not have facilities that can quarantine tens, scores, hundreds of thousands of people,” he said. “This creates a new wrinkle to the crisis. We have to look at new ways to bar entry.” Unlike the rosy glow Mulvaney and others in the administration have put on the virus’ threat to the United States, Cuccinelli was more measured in his assessment. “This is, to a certain extent, a math challenge,” he said. “It is scary. We do need to prepare as a society that this could get worse.” But not to fear, he said, “President Trump has made your safety and the safety of America the priority of his administration.”

Larry Kudlow, director of the White House National Economic Council and another task force member, was far more optimistic. Speaking Friday on a panel with Ivanka Trump, he said, “This will turn out to be a low-risk proposition, not a high-risk proposition. The numbers so far are very low. We’re in good shape. It just goes to show you what a country with freedom can do even with public health. That’s what makes us different. We have the finest public health system in the world.” Kudlow ticked off a number of rosy economic indicators—consumer confidence up!—and said Federal Reserve surveys were showing that the virus was not disrupting supply chains. The stock market, which fell 1,000 points Friday morning because of the virus, was simply an opportunity for the savvy long-term investor to find some bargains, according to Kudlow, who advised the crowd, “You might think about buying the dip.”

Other task force members on the CPAC schedule are Secretary of Health and Human Services Alex Azar, who oversees the Centers for Disease Control, and Robert O’Brien, the president’s national security adviser, who is headlining the event’s Friday night dinner. While they aren’t on the task force, many other administration officials have come to address the crowd and chat up the administration’s accomplishments, including White House adviser Kellyanne Conway, Transportation Secretary Elaine Chao, Education Secretary Betsy DeVos, and Secretary of State Mike Pompeo. And of course, virtually the entire Trump family is on the program, including Don Jr., Ivanka and her husband Jared Kushner, Lara Trump, and the president himself, who is scheduled to speak on Saturday afternoon.

CPAC is the country’s largest and longest-running conservative political convention, drawing upward of 19,000 people—the sort of large gathering that is being canceled all around the world to prevent the spread of the coronavirus. One can only hope that the administration officials are taking the CDC’s advice and washing their hands.