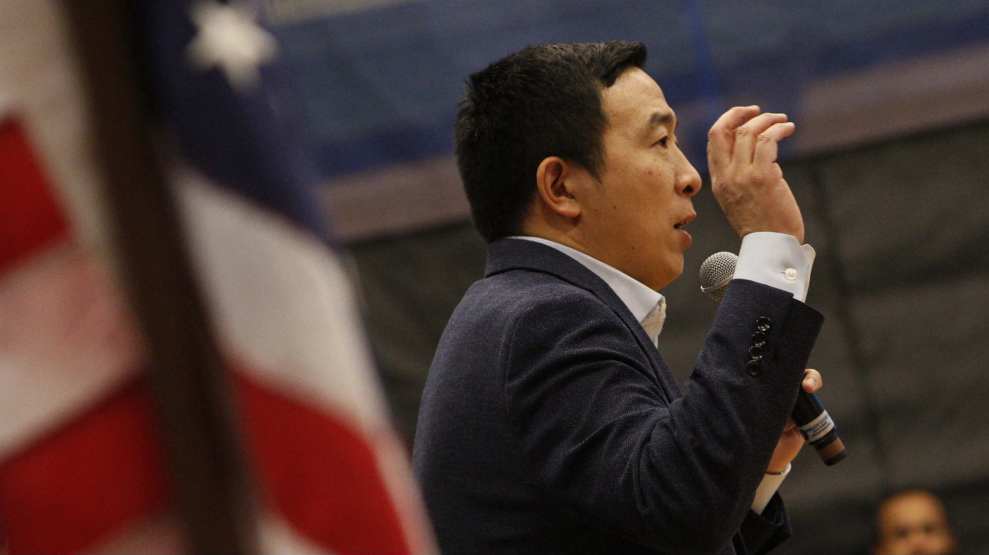 Andrew Yang ended his presidential campaign on Tuesday night as polls closed in New Hampshire, capping off a run that transformed a mostly-unknown entrepreneur into a digital celebrity. Though Yang will not be the Democratic nominee, his campaign achieved a success and dedicated following that multiple US senators, governors, and House representatives were unable to muster. Yang proved an engaging campaigner who clearly enjoyed running for president, with a verve his crowds and competition could feel as well. His concise, single-issue message pushing universal basic income broke through the political noise as he warned about the threat he saw in technological automation and called for cash payments to combat a coming, dystopian wave of unemployment.

Yang’s greatest achievement was putting the idea of basic income on the national radar.

From the outside, Yang’s unlikely success—he continued to qualify for debates into February and raised tens of millions of dollars as higher profile candidates faltered—looked like a fluke. Yang, who mounted the most successful presidential primary campaign of any Asian American in history, showed he could command large crowds, who donned gear bearing his MATH slogan, short for “Make America Think Harder.” Online, his supporters generated countless memes, helping build an army of true believers.

Yang’s strong showing may be more a glimpse of the future than a one-time accident. Yang, steeped in the culture of Silicon Valley, tapped into a pool of online support that future candidates would be remiss not to seek. At 43, Yang campaigned as an enlightened techie, costumed in a campaign ball cap and stars and stripes soccer scarf. He skateboarded, crowd surfed, and paced stages with the swagger of a confident bro. His message spoke to voters, particularly young men, who get their news from podcasts, YouTube, and Reddit. Yang connected with people who didn’t feel that they had a place in the current economy, warning that as automation continued their sense of displacement would only grow worse. In this way, Yang’s support had echoes of Bernie Sanders’—a dedicated online following rooted in communities that were young, concerned about their economic future, and often male.

At the heart of Yang’s campaign was a simplistic, libertarian-style solution to economic struggle. Yang argued that the country was already deep into an automation revolution that will eventually cost millions of Americans their jobs as truck drivers, call-center workers, health care administrators, and even lawyers are replaced with artificial intelligence and robots. The solution, Yang argued, was a $1,000 check per month for all Americans, funded by a form of a sales tax. Yang’s single greatest achievement was putting the idea of basic income—which has been embraced in different forms by both progressives and conservatives for decades—on the national radar.

Whereas Sanders and Elizabeth Warren, the two most progressive Democratic candidates, campaigned on taxing the rich and redistributing their wealth, Yang’s so-called Freedom Dividend would have been more regressive in both funding and allocation. Progressive advocates suspiciously viewed Yang as having disguised a regressive set of economic policies in Sanders-style rhetoric. One tell-tale sign that Yang’s proposal dovetailed with libertarian economic policy: he wanted his universal basic income to replace much of America’s hard-won social safety net.

While Sanders stumped against the “billionaire class” and Warren took on the rigged system, Yang trained his fire on big tech companies, pointing out how they’ve extracted wealth from towns and cities, and stashed it overseas to avoid taxes. But unlike Warren, who advocates for regulating giants like Facebook and Amazon with New Deal-style anti-trust measures, Yang’s approach to reining in big tech was more hands-off. “It’s not like breaking up these big tech companies will revive Main Street businesses around the country,” Yang argued in one of the autumn debates. “Using a 20th century antitrust framework will not work. We need new solutions and a new toolkit”—one that, according to his proposals, hinged on cooperation over aggressive regulation, once again suggesting Yang’s progressive rhetoric masked laissez-faire policy details. Yang himself eschewed ideological classification and instead falling back on nominally apolitical frames of math and rationality, saying that he was simply seeking 21st century solutions to modern problems.

In Iowa, about 5 percent of Democratic caucus-goers indicated Yang was their first choice; the earliest returns suggest he will not exceed that number in New Hampshire, showing his strong online following didn’t translate into huge electoral wins. But his campaign remains a warning shot to Democrats and Republicans. Yes, an outsider candidate can marshal the power of online organizing to develop a cult following that can raise real money and outlast more conventional strategies. And he did so in a way that hints at the allure of a message tapping into Americans’ anxiety about technological progress—even if the proposed solutions he laid out to the havoc wrought by Silicon Valley would ultimately be too small to stop it.