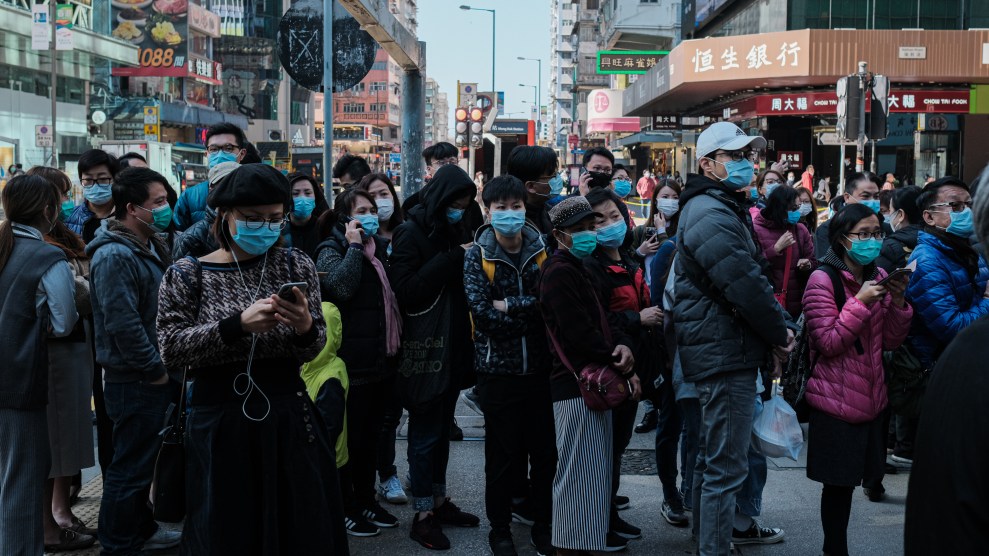 Hundreds of people on Thursday wait in a queue to buy surgical masks at a store in Hong Kong.Keith Tsuji/SOPA Images/LightRocket/Getty

Little-known YouTube accounts are trying to capitalize off fears about the coronavirus to gain viral clout—and for some, it’s paying off.

Video creators are cranking out content that, in many cases, spreads alarm, unsubstantiated claims, scams, and sometimes outright disinformation. And a lot of them are trying to make money off of it.

“He’s not trying to portray himself as someone who works in a lab.”

While YouTube seems to have adjusted its algorithms to prioritize content from authoritative sources and stifle the reach and virality of videos from other creators, a handful of them are still seeping through the cracks and spreading widely on the platform or other social media sites.

One popular series on the virus is produced by a personal finance guru with a history of pushing economic theories about peak oil and other resource crunches, but who has recently rebranded as a pandemic expert as news coverage of the virus has exploded.

“I’m here with a really important message about the coronavirus,” Chris Martenson, one of the founders of the financial website Peak Prosperity, says at the beginning of a video entitled “Coronavirus Is Worse Than You’ve Been Told: Scientist Explains.”

“Unfortunately if you’ve been reading the news you’ve either been under-informed or misinformed about what this virus really is. It’s a very serious thing,” he continues. “To get more updates, please come by [my website]. We have a place for subscribers who want to go a little deeper and get some good advice about what they can do.”

While the website offers some articles on the coronavirus, it also highlights something called “Our Recommended Pandemic Preparations”—only available in a section for paid subscribers.

While Martenson calls himself a scientist in the video’s titles, his claim to the label is, according to him, based on a 1994 PhD from Duke’s Department of Pathology where he specialized in toxicology. While he published scientific research in the ’90s, for at least the last decade Martenson has focused on predicting stagflation and other large shifts in financial markets.

“He’s not a practicing physician, he’s just a guy with a science background who’s taken an interest in this virus,” said Dr. Angela Hewlett, an infectious disease specialist at the University of Nebraska Medical Center and member of the Infectious Diseases Society of America, who clarified that she didn’t see anything in Martenson’s videos that gave her cause for concern.

Adam Taggart, a co-founder of Peak Prosperity, initially explained the company’s mission to Mother Jones as “scientists making sense of the world.” When pressed on his scientific credentials, Taggart noted that he had an MBA but had studied pre-med as an undergraduate, and instead pointed to his colleague’s background.

“If Chris is asked what he is he would say, ‘I’m a researcher who was trained as a scientist.’ He’s not trying to portray himself as someone who works in a lab,” Taggart said, explaining that Martenson and Peak Prosperity have previously deviated from financial topics to make sense of global issues, pointing to work on Fukushima, Monsanto’s Roundup pesticide, and “diet and nutrition issues.”

“People are just hungry for information.”

Until he started making coronavirus videos a few days ago, Martenson’s videos nearly exclusively focused on finance. His second video on the outbreak—“Coronavirus Is Worse Than You’ve Been Told: Scientist Explains”—accrued over 700,000 views, a massive spike from his usual view counts, which hovered in the thousands and low tens of thousands.

Hewlett noted that while his titles could lean towards alarmism, the content of his videos, keyed to spiking interest, appeared to be reasonable. “The titles aren’t indicative of what’s in the videos. But he doesn’t seem to spread misinformation. People are just hungry for information in general. He’s just trying to assimilate media reports,” Hewlett said.

In the four days since that video’s release, Martenson has uploaded six other coronavirus videos that, together, have amassed over a million views. A social media analytics website, Social Blade, shows a spike in new subscribers—in a radical jump from his normal rate, he earned over 12,000 in the past week.

Martenson isn’t the only person producing YouTube videos on the virus as interest explodes. Other accounts reviewed by Mother Jones have shown similar attempts to pivot to videos about the coronavirus, with mixed results. Some, however, have taken off.

A YouTube channel called the Atlantis Report has started to churn out conspiracy-mongering coronavirus videos with titles like “Is Coronavirus part of the Bio warfare being waged against China using Drones?!” and “The Wuhan Coronavirus, A Bio-Weapon stolen from Canada And Intentionally Released in China!?”

The channel’s three videos on the coronavirus, which have collectively racked up hundreds of thousands of views, are even odder than their titles. One video offers a mishmash of conspiracies about the virus that, beyond being baseless, are contradictory. It presents a theory that the virus was engineered by bankers and elements of the anti-Trump deep state, but also that it would benefit Trump’s reelection bid, providing him a biological excuse for any economic collapse that may come before Election Day. It also speculates that the virus will kill off the elderly, reducing Social Security expenditures—even though older voters are a critical component of Trump’s base.

The Atlantis Report videos seem to be narrated by a computer generated voice, and make small but consistent grammatical errors that a native English speaker would be unlikely to make, all overlayed on sometimes unrelated stock footage.

The videos’ description section provides links to a donation page on an a blog associated with the channel called “Financial Armageddon” and to an Amazon affiliate program that gives the person who made the link a referral fee for any purchases then made.

Other small-time creators, with moderate followings, appear to be trying to ride the same wave that has boosted Martenson and the Atlantis Report—with less success. One, Sarah Westall, who runs advertisements for fat burning supplements in her videos about right-leaning conspiracies like QAnon to her 108,000 subscribers, released several conspiracy videos about the coronavirus that have have failed to significantly outstrip her normal fare. Westall, not unlike Alex Jones, runs her own supplement store with products offering unclear medical benefit. Another, Christopher Greene, who runs a website called “Bitcoin Rich,” has been posting alarmist, conspiracy videos about the virus—including “WATCH THIS!!! IT COULD SAVE YOUR LIFE!!”—that have been watched hundreds of thousands of times. In the descriptions of his videos, he also advertises $250 tickets to cloud currency seminars.

Though such videos may not have not gone massively viral on YouTube, they sometimes show how, even with algorithms meant to stem their spread, misinformation and dubious information can still leak out of the platform to other social media groups. According to CrowdTangle’s monitoring tools, such videos are being eagerly shared on conspiracy communities on Facebook and YouTube. For example, one of Greene’s top-performing Coronavirus videos reached an audience of almost 200,000 on Twitter, and was shared and liked thousands of times on Facebook. Because CrowdTangle’s tools don’t capture shares on private Facebook groups, it’s almost certain that the reach was larger.

Hewlett, the infectious disease expert, said she understands the public’s massive concern and interest, but doesn’t think that’s an excuse for grifters and other YouTube creators to chase clicks at the risk of spreading panic or false information.

“Yes, we’re all alarmed about this,” she said. “Everyone in the medical community is alarmed, but we have to temper that with facts and information.”