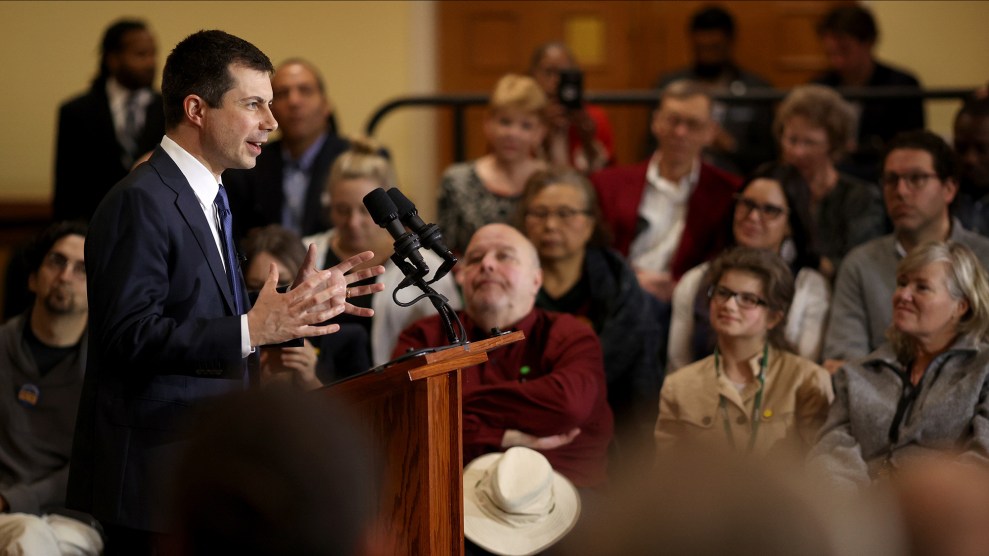 On Sunday night, Rebecca Rushton got a text from the Pete Buttigieg campaign. “Hey—this is Nick from Team Pete!” the message read. “Pete Buttigieg is holding a community conversation tomorrow about investing in Black communities. Can you join us?”

Rushton, 51, is white, but she lives in a predominantly black neighborhood of North Charleston, South Carolina. She offered rides to some of her black neighbors, but when they all declined, she went alone. The scene when she arrived was mostly white and mostly older, with the exception of an adorable toddler named Patrick. Rushton didn’t see anyone she knew, so she made a new friend, Janice Rossman, 66, who had also come alone and is also white.

Once a long-shot candidate, former South Bend Mayor Pete Buttigieg is entering the fourth primary contest of 2020 as a serious contender for the Democratic nomination. But Buttigieg’s success could run dry in South Carolina and three days later on Super Tuesday if he can’t win the support of voters of color. In South Carolina, which will select a candidate for president on Saturday, about 60 percent of Democratic voters are African American.

Buttigieg has tried to reach black voters in the state for months. He’s won the support of Walter Clyburn Reed, the young grandson of the state’s preeminent black politician, Rep. James Clyburn, and of a young black state legislator from Columbia, J.A. Moore. On Monday, Buttigieg marched with fast food workers protesting for union membership and a $15 hourly minimum wage. But that didn’t go as planned: A group of counterprotesters alleging he didn’t work hard enough for the Fight for $15 movement in South Bend nearly derailed the photo-op and sent the mayor hustling to his SUV and speeding away after the event.

The North Charleston town hall was another example of Buttigieg missing the mark, though Moore, who introduced the candidate at the event along with Reed, stayed positive about it. “We would have loved for more folks to have been here that look like me,” Moore told me. “But I think the people that were here were people that are thought leaders in the community, community leaders, people who can take back what they heard to a larger group of black folks. I think it did what it needed to do.”

But the event tapped into a different, if unintended, undercurrent of the primary: Republican women from the suburbs, disillusioned with the party and looking for a candidate on the Democratic side who they can support.

Waiting for Buttigieg’s event to start Monday night, Rushton and Rossman agreed that the primary is completely up in the air. Rossman “had a group over on Saturday night and nobody knew who they were gonna support,” she says, except her young son, who “keeps sending me daily propaganda on Bernie.” Rossman is leaning toward Buttigieg. “What he doesn’t have in experience he has in intelligence,” she says, praising his policies, his youth, and his military service. “But I want to make sure my vote really counts.” To which Rushton jumped in. “Do you pick the person you might not want but needs to be on top?” They nodded toward two women, seated a few feet away, with the put-together air of the critical suburban woman voter. Rushton had overheard one of them saying she had been a Republican. She wanted to know, who should she vote for on Saturday to make sure they will support the Democrat in November?

Andrea Woodfield, 57, had indeed been a Republican. Now an Independent, she is eligible to vote in South Carolina’s Democratic primary. Woodfield was sitting between two friends. One, a proud Democrat and Joe Biden supporter with diamond jewelry, the other, Rebecca Schultz, a sorority sister of Woodfield’s and an Independent. It was clear that a Democratic event targeted at black voters was not the kind of place that Woodfield and Schultz would have run into each other a few years ago. But these are different times.

“He’s good,” Woodfield said of Buttigieg after the event, but then wondered if she should vote for Joe Biden because he had a better chance of winning South Carolina and beating Donald Trump. In 2016, she didn’t vote for Trump or Hillary Clinton, but now she wants to see Trump voted out. “I just don’t like the man,” she says. “I don’t trust him. I don’t respect him. I’m so glad my kids aren’t young,” she continued, because she doesn’t know how she would teach them good values with a bully in the White House.

Woodfield talks like a poster child for the disaffected female suburban voters, for whom Trump is deeply unlikable. “As you move up the economic income ladder, you see much more concern about the impulsiveness, about the chaos that Donald Trump is creating, simply because you have less economic anxiety,” Guy Cecil, chair of Priorities USA Action, a Democratic-aligned super-PAC doing research, polling, and running ads to defeat Trump, told reporters Tuesday in Charleston.

In 2016, Trump won a majority of white women voters; flipping even a small number of them could help Democrats in swing states like Pennsylvania and help Democrats win the Senate and hold the House. That proved true during the midterms, when suburban white women played a crucial role in helping Democrats gain control of the House. But Democratic operatives worry they’ll be scared away from the party if it nominates a more progressive candidate like Bernie Sanders or Elizabeth Warren. If that happens, down-ballot races could be affected, too.

Woodfield made a face like she was biting into a lemon when asked if she would support Sanders or Warren. But after the shudder passed, she tentatively said she would. Trumpism, she says, must end. “We’re shocked at what’s happened to Lindsey Graham,” she adds, referring to the state’s longtime Republican senator who’s become one of Trump’s top boosters. Woodfield added that she comes from a Republican family in Graham’s home town of Seneca, South Carolina.

When asked if she would support Graham’s Democratic challenger, Jaime Harrison, in November, Woodfield said she’d been so preoccupied with the top of the ticket that she hadn’t realized Graham was up for reelection. She paused for a second. “I guess it’s time. Isn’t that sad.”