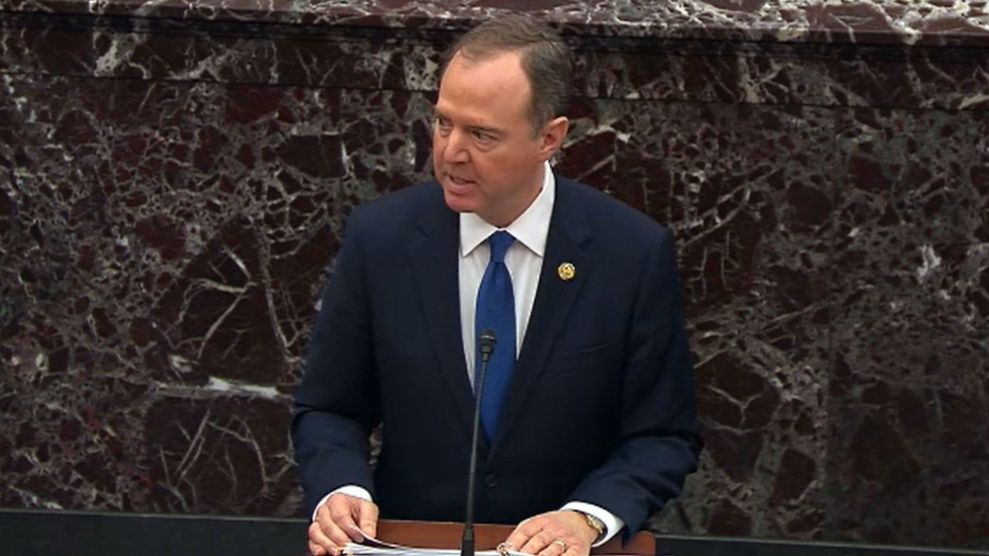 The lead spokesmen advocating and opposing President Donald Trump’s removal from office wrapped up their cases Monday by asking senators to decide if truth matters or if nothing matters. We know how the Senate will answer on Wednesday.

White House Counsel Pat Cipollone ended President Donald Trump’s impeachment defense with a claim he and other Trump lawyers have repeated throughout the trial: “The president has done nothing wrong.”

That is the crux of Trump’s case: Nothing to see here. But no one can dispute that Trump asked Ukraine’s president, Volodymyr Zelensky, to launch an investigation into former Vice President Joe Biden, Trump’s 2020 rival, and to validate a nonsensical Kremlin-promoted conspiracy theory that a Ukrainian oligarch secretly possesses a Democratic National Committee server that Russia hacked in 2016. And even among Trump’s defenders, it’s hard to find an argument that there’s nothing wrong with that. Sen. Lamar Alexander (R-Tenn.) has said that House impeachment managers “proved” that Trump withheld military aid to Ukraine to push Ukrainians to investigate Biden and his son Hunter. Sen. Lisa Murkowski (R-Alaska) on Monday called Trump’s actions “shameful and wrong,” even as she justified plans to vote to acquit Trump. Those senators are part of a growing group of Republicans in the upper chamber who have embraced the position that Trump’s actions were lamentable, even if they do not warrant impeachment.

Yet Cipollone, echoing Trump’s description of his July 25 phone call with Zelensky as “perfect,” isn’t offering any acknowledgement of error by Trump. He is telling Republicans to get in line. While Cipollone did not literally declare that “nothing matters,” the nihilism of his position is hard to miss.

Trump’s defense relies on the notion that the president has the power to create his own reality. Trump’s lawyers insisted during the House’s impeachment inquiry that the administration had no obligation to comply with Democrats’ subpoenas, and systemically stonewalled all requests for information, even fighting them in court. In the Senate, the same lawyers argued that Democrats had failed to assemble enough evidence to show any presidential wrongdoing, and thus had no right to seek more evidence.

Earlier Monday, a deputy White House counsel, Mike Purpura, insisted that senators had heard no evidence that Trump had asked anyone to tell the Ukrainians he would release security aid Congress had appropriated if they agreed to the investigations he wanted. This argument is brazenly misleading: Former National Security Adviser John Bolton, as anyone following politics knows, said he was willing to testify before the Senate, where he would have presumably detailed his claim, made in a book manuscript, that Trump had told him in August that he would not release the aid until Ukraine launched investigations. But in a 51-49 vote on Friday, the Senate refused to seek testimony from Bolton or any other witness. Purpura ignored Bolton and other witnesses, though their claims are public knowledge, because the Senate let him. His argument, in that sense, was a simple assertion of power.

Trump and his lawyers insist that that there was “no quid pro quo,” that “the president did nothing wrong” and “the call was perfect” because they expect, with good reason, that his party will accept these claims, and ignore evidence to the contrary.

In his closing remarks Monday, Schiff took aim at that mentality. “America believes in a thing called truth,” he said. “She does not believe we are entitled to our own alternative facts. She recoils at those who spread pernicious falsehoods. To her, truth matters. There is nothing more corrosive to a democracy than the idea that here is no truth.”

History will not be kind to Donald Trump.

It may be midnight in Washington, but the sun will rise again.

I put my faith in the optimism of our Founders.

This speech bears similarity to the arguments made by government prosecutors in the November trial of Trump associate Roger Stone. who was convicted of lying to Congress about his contacts with WikiLeaks regarding Democratic emails hacked by Russia. In a closing argument to jurors then, Assistant US Attorney Michael Marando told jurors that “you can find any political view you want” and “your own truth” online, but “in our institutions of self governance, courts of law or committee hearings, where people have to testify under oath, truth still matters.”

Truth matters. Mardondo made it a refrain during the trial, and it was so effective that one juror used the phrase in a Washington Post op-ed to explain Stone’s conviction.

That Schiff made similar arguments Monday is not a coincidence. He led House Democrats’ investigation into the Trump campaign’s ties to Russia, and he faulted Trump on Friday for encouraging and accepting Russian help in the 2016 election and then lying about it. Like federal prosecutors who investigated the Trump–Russia scandal and who indicted Stone and a handful of other former Trump aides for making false statements about their contacts with Russia, Schiff has been at pains to highlight the pernicious effect of the rampant dishonesty of Trump and his circle. Schiff on Monday implored GOP senators to assert values distinct from mere partisan loyalty to Trump.

Schiff’s argument is not going to convince 20 Republicans to vote to convict Trump. It may not convince any. But along with Cipollone’s closing, it will help define the votes that senators cast on Wednesday. Do Senate Republicans agree that Trump did nothing wrong? Is he who they are? Watch how they vote.