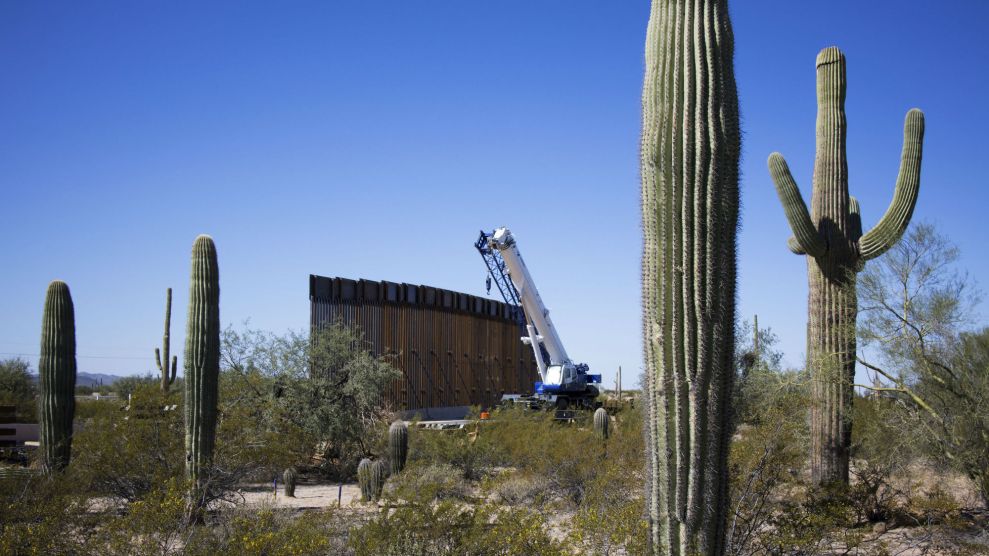 Contractors hired by Customs and Border Patrol began blasting ground last week in areas of Organ Pipe Cactus National Monument, the latest step in President Donald Trump’s $646 million plan to build a 30-foot wall along 63 miles of the Arizona-Mexico border. While the border wall construction has been controversial every step of the way, the construction in Organ Pipe Cactus is happening at Monument Hill, which contains burial grounds with cultural significance for the O’odham people, who have lived in the borderlands before it was divided between the United States and Mexico.

Ted Norris Jr., chairman of the Tohono O’odham Nation, just east of Organ Pipe Cactus, decried the entire project as senseless destruction of ancestral land. “The Tohono O’odham Nation is adamantly opposed to the construction of the 30-foot, fortified border wall, which would irrevocably harm cultural sites, sacred sites and the environment,” Norris said in a statement. “It is all the more tragic that billions of taxpayer dollars are being wasted on an empty campaign slogan that will do little to address border security challenges.”

US Customs and Border Protection confirmed the activity. “The controlled blasting is targeted and will continue intermittently for the rest of the month,” a spokesperson said in a statement. CBP says that they will have an “environmental monitor” present during construction, but Norris said that federal agencies have not consulted with the Tohono O’odham Nation before beginning construction, as federal policy requires.

Trump’s border wall represents the latest chapter of an ongoing saga between the Border Patrol and the Tohono O’odham Nation.  Since the 1990s, the O’odham people’s location on the border has placed them squarely in the middle of conflicts between law enforcement, migrants, and drug cartels.

As The Intercept’s Ryan Devereaux explained in his November 2019 coverage of border wall protests, life changed for the O’odham people with the arrival of a new border enforcement policy called Prevention Through Deterrence. The strategy redirected migrants away from larger cities like El Paso and San Diego, and into remote desert areas like the Tohono O’odham Nation. The people living there did what they could to assist the influx of migrants showing up on their doorstep, but then Border Patrol arrived:

In relatively short order, O’odham lands became occupied territory, crawling with Border Patrol agents, penned in with vehicle checkpoints and monitored 24/7 with the latest in surveillance technology. As the interdiction industry put down roots, an economy for getting past the border guards ballooned. On the economically struggling Tohono O’odham Nation, the allure of potentially easy money trapped more than a few people in the cycle of arrest, felony conviction, and incarceration that plays out in communities across the country, including those far from the border. In 2009, the Associated Press reported a sixtyfold increase in the “percentage of suspected drug smugglers arrested by Tohono O’odham police who are tribal members” over the preceding two decades. “The jump is due to a surge in recruiting that stems from the growing number of Border Patrol agents on the Tohono O’Odham Nation and the recent construction of steel vehicle barriers that line most of the 75 miles of international border,” the AP noted.

More enforcement meant more illicit activity, which required more enforcement — it was self-sustaining cycle with real-life consequences for the O’odham people. “Growing up, we reached a point where we didn’t know we had rights,” Ortega explained.

O’odham people have been joined by environmental activists in opposing the construction at Organ Pipe for the threat it poses to cultural sites as well as natural resources. The national monument also includes Quitobaquito Springs, one of the only water sources in the desert area, which has been made vulnerable by the pumping of groundwater to mix concrete for the border wall. The nation has asked CBP to create a two-mile buffer zone around Quitobaquito, according to reporting from the Arizona Republic.

Laiken Jordahl, a campaigner with the Center for Biological Diversity, has been on the ground at Monument Hill monitoring the construction’s progress.  He says that in the six months that the wall has been under construction, they’ve seen a “huge” amount of damage, including the felling of giant saguaro cacti and attempts to wall off the San Pedro River.

BLAST WARNING SIGNALS sign & dead saguaros at Organ Pipe as the Trump administration blows up a sacred mountain for the #BorderWall. pic.twitter.com/wvO5DvyDkT

“The Trump administration is operating with total lawlessness and no regard for tribal sovereignty,” Jordahl said. “This is a total desecration of Native land.”