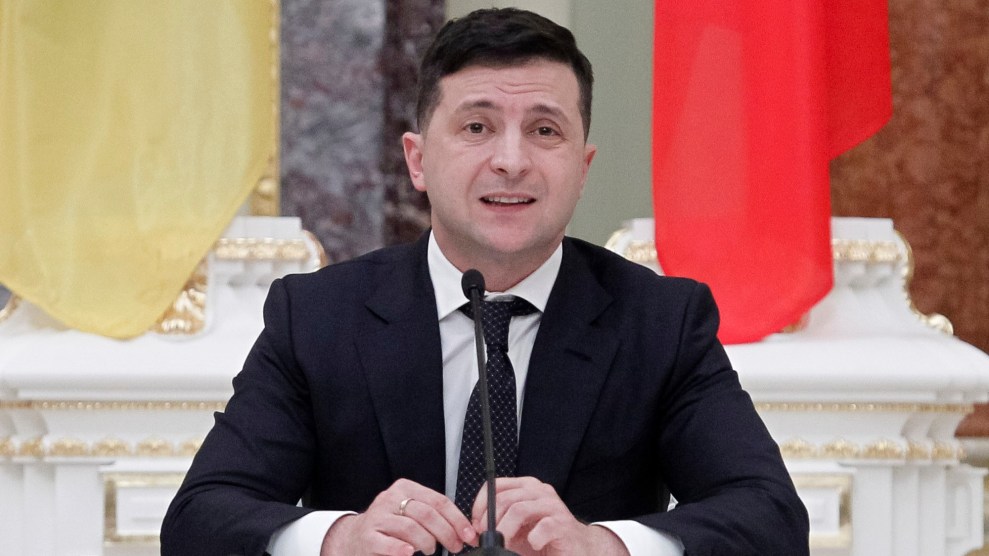 President Volodymyr Zelensky speaks after a press conference in Kyiv in February 2020.STR/NurPhoto/Getty

President Donald Trump famously had a request for the president of Ukraine when the two leaders spoke over the phone on July 25. That request to launch politicized investigations into Joe Biden and his son turned into a months-long congressional investigation, making Trump only the third president in history to be impeached.

Now President Volodymyr Zelensky of Ukraine has his own request for Trump. “Please, please stop saying that Ukraine is a corrupt country, because from now, it’s not true,” he told CNN’s Christiane Amanpour on Saturday. “We want to change this image.”

Corruption is a persistent problem in Ukraine but Zelensky, who once played the president of Ukraine on television, has actually taken steps to crack down on graft and abuse. He passed anti-corruption legislation within months of taking office and, in December, signed a whistleblower protection law that protects against workplace retaliation and provides free legal counsel to those who come forward. Trump, of course, has mused about whether the whistleblower who reported his call with Zelensky deserved the death penalty and, after his acquittal, fired or reassigned several witnesses who gave testimony as part of the House Democrats’ impeachment inquiry.

These reforms haven’t stopped Trump from repeatedly portraying Ukraine as hopelessly corrupt, which Trump argues is the reason why he wanted Zelensky to investigate the Bidens, not because it politically benefited him.

“We’re supporting a country; we want to make sure that country is honest,” Trump said in September. “It’s very important to talk about corruption. If you don’t talk about corruption, why would you give money to a country that you think is corrupt?” But as the Washington Post noted later that month, Trump’s concerns about corruption are “highly selective and remarkably convenient.” On the call with Zelensky, he brought up Burisma, a company where Hunter Biden served on the governing board, and CrowdStrike, a California cybersecurity firm that helped prove Russia hacked the Democratic National Committee in 2016. The investigation into Burisma never involved Hunter Biden and had long been dormant, while the flippant reference to CrowdStrike seems to invoke a baseless conspiracy theory that the firm’s analysis “was suspect because one of the firm’s co-founders is part of a nonprofit organization that receives funding from a wealthy Ukrainian,” the Post reported. Far from the vaunted anti-corruption warrior he proclaimed to be, Trump was asking Zelensky to investigate hogwash.

He added, “If this way will help Ukraine, I am ready for the next call with Mr. Trump.”