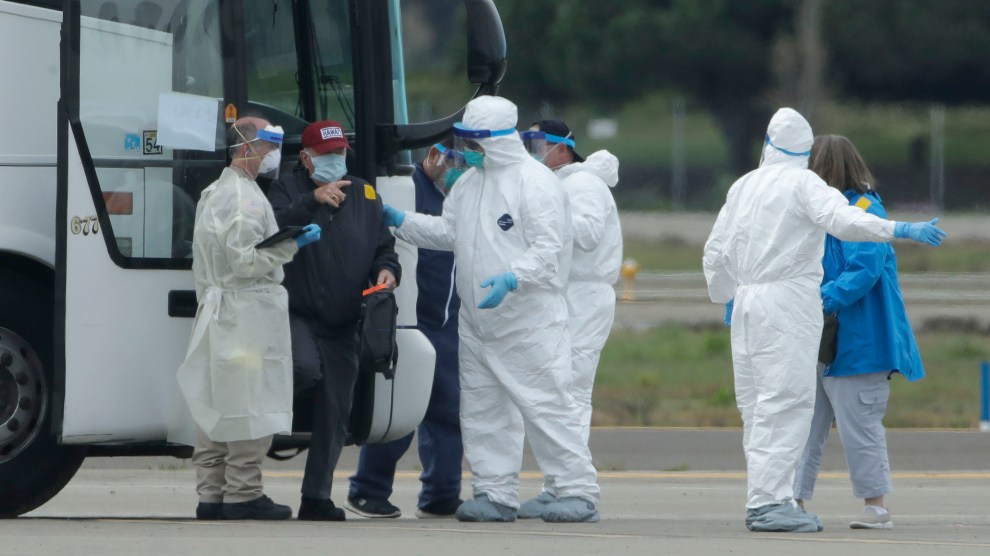 Passengers from the Grand Princess exit a bus in Oakland.Jeff Chiu/AP

After spending five days quarantined in their cabins aboard the Grand Princess cruise ship that carried 21 people infected with the coronavirus off the coast of San Francisco, passengers faced a harrowing bus journey to an Air Force base where chaos and confusion reigned.

Of the ship’s 2,422 guests, 858 were sent to the Travis Air Force Base in Fairfield, California, for a two-week quarantine, according to the Department of Health and Human Services. One of these passengers was 77-year-old Steve Houghton, who describes an exhausting trip from boat to bus to Air Force condominium that spanned nearly eight hours.

Houghton, a retired commissioner and judge who lives in Pleasant Hill, California, had been hesitant about boarding the cruise ship after it returned to San Francisco from Mexico in late February. His hesitation turned out to be well-founded: after 10 days in the Pacific Ocean, passengers went into quarantine aboard the boat. “They shut the dining rooms, the bars, any alternate eating sites, and we just were given our food and masks and essentially confined,” Houghton says.

Then, on Tuesday, Houghton and his 74-year-old wife were awoken at 6 a.m. as the ship began evacuating passengers in different groups based on destination—passengers were brought to military installations in California, Texas, and Georgia, according to HHS. Houghton and his wife were among the passengers who disembarked at 5:30 p.m. in Oakland. The bus left Oakland at about 5:45 and arrived in Fairfield shortly after 7 p.m., Houghton says. Once in Fairfield, the roughly 50 passengers, all wearing face masks, were not allowed off the bus for nearly two hours.

“There’s no logistical support at all here. It’s as if nobody really anticipated that 900 Californians were gonna come into this facility. This is after five days of being in total isolation.”

Then there was the luggage ordeal. Hundreds of passengers’ luggage was dumped in a dimly lit Air Force parking lot, where Houghton says he rummaged around for 40 minutes before finding his bags. After standing in line to get his room assignment, Houghton thought he was on the home stretch. Then another bus pulled up.

About half an hour past midnight, Houghton and the rest of the passengers were corralled back onto this other bus with their luggage, only to be dropped off in another dimly lit parking lot from which they were finally allowed to leave and find their rooms. “The anger at the bus stop,” Houghton says, “was more than a little surly for older adults. A little screaming and more than a little annoyance and vitriol directed at the guy who was trying to get us on the bus.” On top of that, he says, “Nobody assisted anybody—other than the people that could not walk at all—to their rooms.”

When he finally reached his room at 1 a.m.—more than seven hours after getting off the Grand Princess—Houghton found it nearly empty, save for fresh sheets on the bed and towels in the bathroom. He had to request toilet paper and soap, which were delivered within the hour. Still, “there wasn’t a plate, a fork, a knife. There weren’t any cups or glasses,” Houghton says. “I called the main number and she said, ‘Well, if you can find a cup, hang on to it.’”

Overall, it’s been an exhausting ordeal. “There’s no logistical support at all here,” Houghton says. “It’s as if nobody really anticipated that 900 Californians were gonna come into this facility. This is after five days of being in total isolation.”

Still, Houghton has been focusing on the positives, like the can of Coca Cola he was enjoying as we spoke on Wednesday. He has shown no symptoms, and, as of Friday afternoon, had not been tested for the coronavirus aside from having his temperature taken. (Last week, Vice President Pence assured the nation that all cruise ship passengers would be tested, and HHS said that those tests would take place at the military installations.) During our phone call, a knock on Houghton’s door turned out to be a coffee delivery.

Houghton and his wife aren’t the only members of the family whose lives have been upended by the coronavirus. His daughter, Beth Houghton, runs an Oakland children’s yoga studio that hosts summer camps. “If it goes on much longer and I have to return the summer camp money, it’s not an exaggeration to say I’ll have to go out of business,” she tells me.

“All this presents a stress that you don’t need,” Houghton says, aptly summing up the pandemic that has killed more than 4,000 people worldwide. “But we went out and took a little walk around the complex, and it’s OK. So we’ll be OK.”