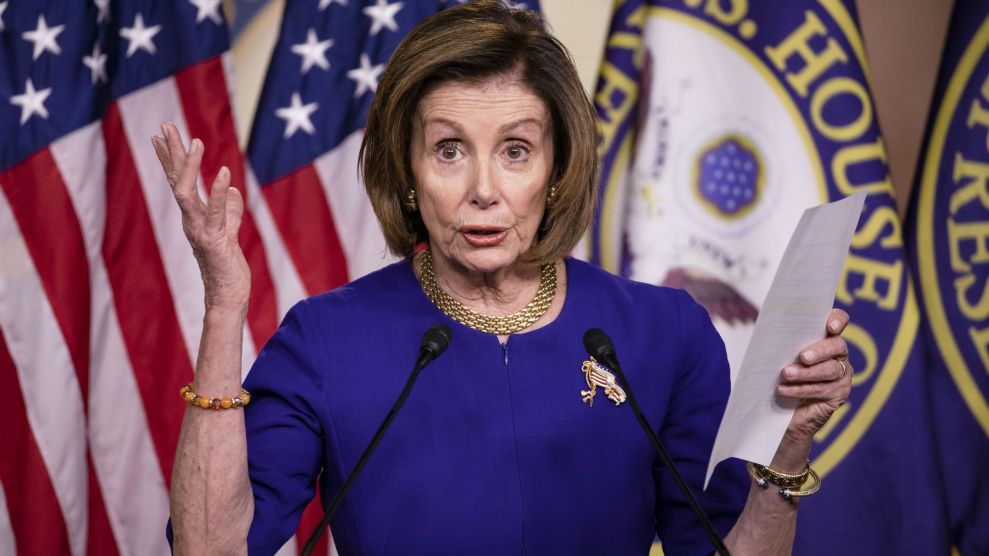 In the aftermath of the House impeachment of Donald Trump and his party-line acquittal in the Senate, House Democrats are grappling with the question of whether they should continue to pursue aggressive oversight investigations of Trump in the months before the election. Speaker Nancy Pelosi (D-Calif.) has signaled her reluctance to engage in more investigations, pushing instead a focus on the coronavirus crisis. But some Democrats are insisting they should keep at it and pressing for the House to beef up its investigative muscle by reviving its historic power to fine or even jail witnesses who refuse to honor subpoenas to testify before Congress.

The Trump administration thwarted and or impeded various House investigations—such as the House Judiciary Committee’s inquiry into the alleged instances of obstruction of justice detailed in the final report of Special Counsel Robert Mueller—by ordering past and present officials to not cooperate with House investigations and not honor congressional subpoenas. (This is essentially why former National Security Adviser John Bolton did not testify during the House impeachment inquiry, even though he apparently could have confirmed that Trump did withhold military aid from Ukraine to pressure it to gin up investigations that would benefit him.) Yet Congress has the power—at least, on the books—to enforce its own subpoenas. That is, it doesn’t have to run to a federal judge to obtain a court order. And some Dems are itching to deploy this power, which is called “inherent contempt,” to break through Trump’s stonewalling.

“When are we going to take up inherent contempt?” Rep. Gerry Connolly (D-Va.), a senior member on the House Oversight Committee, asked in an interview last week. “Congress must enforce its own subpoenas.”

Yet at a press conference last Thursday, Pelosi dismissed a question about moving forward with investigations that use this power to hold in contempt witnesses who refuse to testify. She suggested the House should instead deal with coronavirus: “Right now, we’re trying to save lives, prevent a disease from spreading. We had enough to challenge us with getting a supplemental [appropriations bill for the coronavirus crisis] that the Republicans would agree to of the size that we needed.”

Pelosi added: “That doesn’t mean that we abandon any of our responsibilities to protect and defend and Constitution of the United States and the congressional oversight will always continue.” She did not specify what oversight she had in mind.

In the 19th and early 20th centuries, the House and Senate exercised the power to take witnesses into custody if they ignored subpoenas. But in recent decades, Congress has relied on the judiciary, filing civil lawsuits asking federal courts to enforce its subpoenas. That approach took a blow on February 28, when the federal appeals court for Washington, DC, ruled that Congress cannot sue to enforce its subpoenas of executive branch officials. It dismissed a House lawsuit brought by the Judiciary Committee against former White House Counsel Don McGahn to compel him to comply with a House Judiciary subpoena and give testimony regarding his knowledge of Trump’s efforts to fire Mueller and other possible acts of obstruction of justice.

The McGahn case affects the House’s ability to enforce subpoenas against other witnesses. This includes witnesses in the Ukraine scandal investigation who refused to comply with House subpoenas for testimony and documents, such as Trump’s personal lawyer, Rudy Giuliani, recently ousted White House Chief of Staff Mick Mulvaney, acting budget director Russ Vought, Secretary of State Mike Pompeo, and other Office of Management and Budget and State Department officials.

In the wake of the McGahn ruling, lawmakers said they were renewing efforts to bring back inherent contempt. “We clearly can no longer rely on the courts,” Connolly said. “That’s what that ruling told us… The time has come for the [Democratic] majority to step up forcefully to this challenge and enforce its own subpoenas. And that includes fines, that includes disbarment, and includes arrests and incarceration.”

The push by some Democrats for action on inherent contempt has become part of a broader debate within the House Democratic caucus over whether to keep chasing after Trump with further investigations of his apparent solicitation of foreign intervention in the 2020 election. Some rank and file members say they are eager to stay on this case, but Pelosi, key Democratic committee chairs, and Democrats from swing districts are not eager to initiate new probes of Trump.

On the other side of Capitol Hill, there has been no such hesitation about mounting investigations with political consequences. As former Vice President Joe Biden has become the frontrunner in the Democrats’ 2020 battle, Senate Republicans revved up efforts to investigate work that Biden’s son Hunter did as a board member for Ukrainian energy company Burisma. That is the same issue that Trump pressured Ukraine to investigate last year. Yet in the House, Democrats are not pursuing far more credible leads about Trump’s Ukraine scheme that were not covered during the impeachment inquiry. For instance, they have not followed up on information revealed by Lev Parnas, the Rudy Giuliani associate who has been indicted and who was a key player in Giuliani’s skullduggery in the former Soviet republic. Democrats also have not subpoenaed Bolton.

Several House Democrats and progressive activists argue that the House should do more. They contend the House Democrats remain the only check on Trump and that to serve in that role they must wield the power of inherent contempt. “The President and his enablers in the Senate and the courts leave us with little choice,” Rep. Jamie Raskin (D-Md.) told Mother Jones. “We are forced once again to exercise the powers of legislative self-help to obtain from a lawless executive branch the information we need to legislate.”

Other Democrats believe additional oversight efforts are likely to prove futile, at least in the near term, and will distract from the messaging that can help the Democrats oust Trump and win House and Senate seats in November. In an interview last week, Ashley Etienne, Pelosi’s communications director, questioned the value of pursuing subpoenas related to conduct for which Trump was impeached. “The question you have to ask is: To what end?” Etienne said. “We know what the president did.”

“We took our best shot at the president,” Etienne added. She noted that Democrats are focusing on election security and measures that could stop Trump from encouraging foreign interference in upcoming election. Etienne did not specify those measures, noting this effort may occur behind closed doors. “Just because you don’t know about something doesn’t mean it isn’t happening,” she said. (On Tuesday, administration officials briefed members in both chambers on election security. According to the Washington Post, acting Director of National Security Richard Grenell declined to brief lawmakers, citing apprehension about addressing sensitive issues likely to upset Trump, in particular intelligence assessments that Russia is again interfering in US politics.)

Still, some Democrats believe they ought to continue the investigations, take on White House stonewalling directly, and force a public confrontation. “We have to pursue these things, so that the American public is informed what is at stake, what is going on,” Connolly, said. “We can’t pretend it’s all over.”