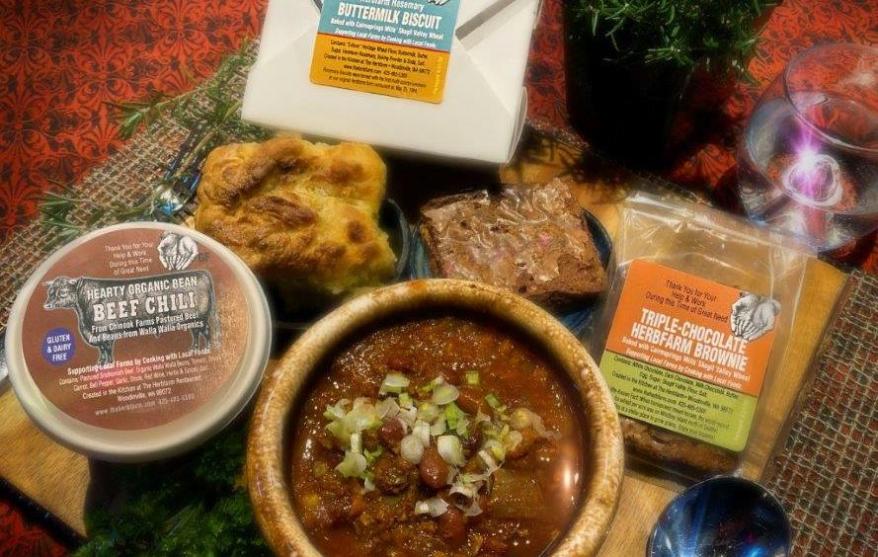 When the coronavirus struck Washington state hard, a restaurant once named the top destination in the world by National Geographic Traveler joined so many others in closing. Since then, the Herbfarm has retooled as a kitchen feeding doctors, nurses, and medical staff at five hospitals on the front lines of the coronavirus fight.

“We’re going to still need to eat. And the farmers, fishermen, foragers, ranchers—they have food that they’ve produced and their normal outlet is the farmers market and restaurants, and all of that is closed, so they have nowhere to send that,” Van Dyck said. “We wanted to help out the [vendors] who’ve been supporting us, and think of ways to continue to buy from them, and also help out these people who are doing an amazing job [in hospitals] right now.”

The bulk of the effort is funded by a GoFundMe drive to help the medical staff at these hard-hit hospitals. “One thing COVID-19 teaches us clearly,” said one appreciative ER doctor, Jonathan Scheffer: “We are all, most definitely, in this together!”

Get me to the judge on time. Just after New York City’s marriage bureau got shut down Friday, a couple found a judge and got hitched. Alex Brook Lynn and Adam Levy, wearing plastic gloves, were married in a one-minute ceremony outside the marriage bureau. Judge Kevin McGrath followed the pronouncement with this: “May you [elbow] bump each other.” A second couple, wearing masks, happened upon the ceremony—and McGrath married them, too. Honeymoon plans for Lynn and Levy? A walk in a park in the Bronx, Lynn said, then back to their home in downtown Manhattan to shelter in place. “I did not think my wedding would be like this,’’ the bride said. “You kind of roll with what is going on.” (New York Post)

A world singing. Defiant people self-quarantined across the globe are following Italians’ lead by taking to porches, balconies, and rooftops, lifting their voices to stand together against the pandemic. In Montreal on Sunday, residents united to sing Leonard Cohen’s “So Long, Marianne” from their homes; in Mallorca, Spain, dancing and guitar-playing police led a locked-down neighborhood with songs; in Dallas, tenor Danzel Barber began a singalong of Bill Withers’ “Lean on Me” from the windows of an apartment building. Readers, what did we miss? Let us know if your community is rising up as one in song. (CBC)

Helping the wallaby. Last we checked, Australia’s wildlife was fighting to survive against some of the worst bushfires in modern history. Now, marsupials that have survived face a challenge—many of the plants they feed on have been destroyed. People have stepped up to drop water, carrots, and sweet potatoes for starving wallabies. It’s helping. (New York Times)

Followup. Last week, we told you about senior citizens in their cars, terrified to buy groceries for fear of catching the coronavirus. Now, several supermarket chains have set up special hours for seniors and those with underlying health conditions. Veteran journalist John Schwartz joked that he was bummed he wasn’t carded upon arrival at a special early-morning entry to one grocery. I asked a cashier at another store on Sunday if the early crowd was nicer or ruder than the later customers. “Both,” she replied. (Mother Jones)

I’ll leave you with a bit of perspective: the light shining through ancient forests that have grown amid centuries of world crises. This image comes from Washington’s Olympic National Park, via the Interior Department’s Twitter feed. Remember, this land is your land. See you next week!

There's poetry in how the light flows through the trees of the ancient forests @OlympicNP. #InternationalDayofForests #WorldPoetryDay #Washington
Pic by Kristopher Schoenleber (https://t.co/lloddoaTw1) pic.twitter.com/3GupDFjPEa